A brief look at competitive gaming 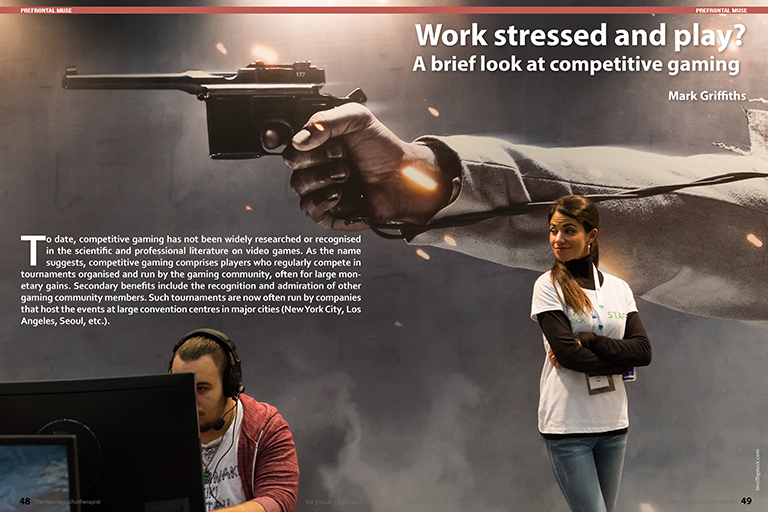 To date, competitive gaming has not been widely researched or recognised in the scientific and professional literature on video games. As the name suggests, competitive gaming comprises players who regularly compete in tournaments organised and run by the gaming community, often for large monetary gains. Secondary benefits include the recognition and admiration of other gaming community members. Such tournaments are now often run by companies that host the events at large convention centres in major cities (New York City, Los Angeles, Seoul, etc.).

Despite three decades of worldwide growth in competitive gaming, little empirical investigation has catalogued these activities. Although empirical studies are lacking, studies have noted that competitive games now use Internet radio coverage with play-by-play commentaries, large-screen televised projections of game footage, sizeable live audiences, and cash prizes in the hundreds of thousands of dollars. For elite competitive gamers (i.e., professional gamers), the activity is a full-time job. Many games played competitively appear to demand high levels of sophistication in strategizing, planning, multitasking, and timing to master.

Academic studies have shown that, if used properly, certain competitive games can also promote prosocial behaviour and skills development. Furthermore, professional success in competitive gaming seemingly requires persistent practice and sophisticated skill sets. It is likely that these positive effects are more substantial than the effects of games played on a casual level. Numerous studies have demonstrated the benefits of gaming more generally, in lieu of any specific information on the positive effects of competitive gaming, particularly in relation to improved spatial cognition. Studies have also suggested that video games can provide an enriched medium for strategic problem-solving. Other studies support the differences between novice and advanced levels of play in video games. For instance, research has demonstrated measurable differences between novice and expert game players, the latter group often demonstrating enhanced short-term memory, executive control/self-monitoring, pattern recognition, visual–spatial abilities (e.g., object rotation), and task-switching efficiency, along with more efficient problem-solving skills.

Competitive gaming has the potential to change the dynamics and motivations of gaming. If a player can make a financial living and career from playing a video game, for example, it becomes an occupation rather than a hobby. This raises interesting questions about the role of context in excessive gaming and potential addiction. Although there is ongoing scientific debate on the nature and extent of adverse consequences associated with excessive digital technology use, I have previously noted that long hours of video game use alone do not indicate video game addiction; in other words, heavy use on its own is not a sufficient criterion for addiction (Griffiths, 2010).

Therefore, in order to evaluate problematic video game use, researchers must first consider what negative consequences players are experiencing in their lives. When video game players are capable of financially supporting themselves from their play, this matter becomes more complex. For example, how would one categorise a professional video game player who was making over $100,000 per year playing video games, but was also experiencing social difficulties as a result of excessive video game use? This point is not meant to imply that a successful professional gamer is incapable of suffering pathological effects from game use, but rather to raise the distinct possibility that professional gamers will view their use as non-problematic due to the success they experience.

When it comes to competitive gaming, many players will play excessively and spend hours and hours every single day either practising or competing. For many competitive gamers, their whole life is dominated by the activity, which may impact on their relationships and family life. However, this does not necessarily mean they are addicted to playing the games; the excessive game playing is clearly a by-product of that activity being their job. However, it could perhaps be argued that they are addicted to their work—and, in this case, their work comprises video-game playing.

Workaholics have been conceptualised in different ways. For instance, in a review I published in The Psychologist (Griffiths, 2011), I noted that workaholics are typically viewed in one (or a combination) of the following ways: as hyper-performers,  as using work to avoid thinking about their emotional and personal lives, and/or as over-concerned with their work and neglectful of other areas of their lives. Some of these may indeed be applied to competitive gamers (particularly the reference to hyper-performers and the fact that other areas of their lives may be neglected in pursuit of their ultimate goal). Some authors note that there is a behavioural component and a psychological component to workaholism. The behavioural component comprises working excessively hard (i.e., a high number of hours per day and/or week), whereas the psychological (dispositional) component comprises being obsessed with work (i.e., working compulsively and being unable to detach from work). Again, these behavioural and psychological components could potentially be applied to competitive gamers.

I have also noted that there are those who differentiate between positive and negative forms of workaholism. For instance, some researchers (like myself) view workaholism as both a negative and a complex process that eventually affects a person’s ability to function properly. In contrast, others highlight the workaholics who are totally achievement-oriented and have perfectionist and compulsive traits. Here, the competitive gamer might be viewed in terms of a more positive form of workaholism. Research appears to indicate that there are a number of central characteristics of workaholics. In short, they typically (a) spend a great deal of time in work activities; (b) are preoccupied with work even when they are not working; (c) work beyond what is reasonably expected from them to meet their job requirements; and (d) spend more time working because of an inner compulsion, rather than because of any external factors. Again, some or all of these characteristics could be applied to competitive gamers.