The human brain has about 100,000 miles of white matter (bundles of myelinated axons) shooting electrochemical signals down 100 billion neurons through 100 trillion synaptic connections—we are spectacularly connected!

The pattern of neural connectivity in our brains has long captured the attention of neuroanatomists. It can be described at several levels of scale: the individual synaptic connections that link individual neurons, networks connecting neuronal populations, and entire brain regions linked by white-matter highways. Mapping the large-scale connectivity within and between brain regions is what has captured the imagination of the National Institute of Health, which has funded the Human Connectome Project (HCP), a 40 million-dollar effort to map the human brain. Each of us has a unique neural map, rather like the uniqueness of our fingerprints, that has been shaped by our genetics, environment, and life experiences. It is this map, or “connectome”, that researchers would like to recreate in a virtual space to model the highways and byways of neural connectivity. 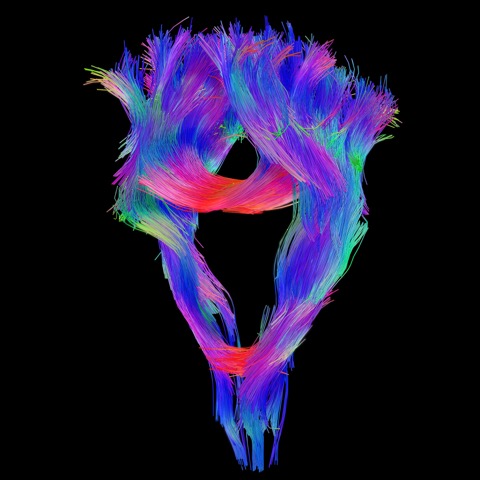 White Matter Fibre Architecture. Courtesy of the Laboratory of Neuro Imaging and the Athinoula A. Martinos Centre for Biomedical Imaging, Consortium of the Human Connectome Project – www.humanconnectomeproject.org

The connectome is extremely complex and not yet well understood. It is the hope of the HCP that by mapping many individuals, they will establish a baseline of normal connectivity and reveal how connectivity differs across individuals displaying psychopathology.

In a recent study published in Nature Neuroscience (Smith et al., 2015), investigators found a significant relationship between the brain’s default-mode network and personal traits such as IQ, language skills, and life satisfaction. The researchers examined 461 subjects, looking at the correlations between their resting-state functional connectivity and behavioural and demographic measures. They found that the subjects who returned high scores for cognition, memory, education, and income level—as opposed to more “negative” measures such as substance use and aggression—showed higher connectivity in components of their default network. Such connections included the medial frontal and parietal cortex, the temporo-parietal junction, the anterior insula, and the frontal operculum. This correlation between attributes of positive life functionality and underlying brain connectivity was interesting indeed—but did higher connectivity between components of the default network give rise to more “positive” life outcomes, or were there other developmental, relational, and environmental factors at play? The researchers admit that it was impossible to tell from their study. However, as causal relationships are progressively better understood, it may become feasible to use this information to assist a transition in the brain toward the positive end of the axis.

Interestingly, one of the factors that most impacted the brain toward the negative axis was marijuana use within the few weeks prior to the study. Such findings should throw up a red flag and highlight the importance of more research to determine how marijuana affects the brain.

In addition to mapping the adult brain, the HCP has a developmental arm based at King’s College London, Imperial College London, and Oxford University. It is the Developing Human Connectome Project (dHCP), whose aim is to break new ground with the creation of four-dimensional connectomes of early life. The project is looking to map brain connectivity from 20 to 44 weeks that will link clinical, behavioural, and genetic information to the connectome image.

Massive change occurs in the developing brain of a child, and the challenge to map and understand it is substantial. One of the studies the dHCP is currently engaged in involves 8-year-old children, half of whom were born prematurely and half full-term, to see if there are any brain network differences between them. Premature babies are at greater risk of neurodevelopmental problems, but little is known about how they develop such impairments. A huge amount of brain development in infants occurs just prior to full term, and for that development to take place outside the mother, in the case of pre-terms, may be significant for these children. For instance, the fibres forming connections to and from the thalamus, the central exchange centre of the brain, grow extensively during the time period in which dHCP teams monitor premature babies; a map of this area during these critical developmental stages could yield valuable insights.

One of the principal investigators, David Edwards, says that there are structures being developed in the last trimester that may underlie conditions like schizophrenia, autism, and depression, and it is his hope that the project can identify subtle differences in connectivity that may predispose some children to mental illness.

A recent study at the University of California San Francisco (Chang et al., 2016) demonstrated measurable differences in the connective wiring of children with sensory processing disorder (SPD) compared to typically developing children. The study is the largest ever conducted with child SPD sufferers and the first to compare white-matter tracts in the brains of typically developing children against those with SPD.

The imaging done with these children detected abnormalities in the SPD subjects in the white-matter tracts that serve as connections for the auditory, visual, and somatosensory (tactile) systems involved in sensory processing, including in the connections between left and right hemispheres. The abnormal microstructure of sensory white matter tracts in children with SPD likely alters the timing of sensory transmission, so that the processing of sensory stimuli and integrating of information across multiple senses becomes difficult or impossible.

Another impressive tool employed by researchers mapping the connectome is the connectogram, a two-dimensional graph used to study the arrangement of white-matter fibre in the brain. Based on diffusion MRI data, this circular graph highlights the strength of connections between different regions of the brain. The connectogram can display 83 cortical regions within each hemisphere, and unlike other representations of the connectome that require software to display the three dimensions, these representations can show connected regions in a flat, two-dimensional graph.

The left half of the connectogram depicts the left hemisphere, and the right half depicts the right hemisphere. The circular graph is further broken down into sections representing the frontal lobe, insular cortex, limbic lobe, temporal lobe, parietal lobe, occipital lobe, subcortical structures, and cerebellum. The brain stem is also represented, between the two hemispheres at the bottom of the graph. Each cortical area within the lobes is labelled and features a unique colour that can be used to designate the same cortical region in other figures, so that the reader can find the corresponding cortical area on a geometrically accurate surface and see exactly how disparate the connected regions may be. Inside the cortical surface ring are concentric circles representing different attributes of the corresponding cortical regions. In order from outermost to innermost, these metric rings represent the grey matter volume, surface area, cortical thickness, curvature, and degree of connectivity. The lines you see in the diagram on this page show the connections between regions. The opacity and colour of the lines represent the strength of the connection. 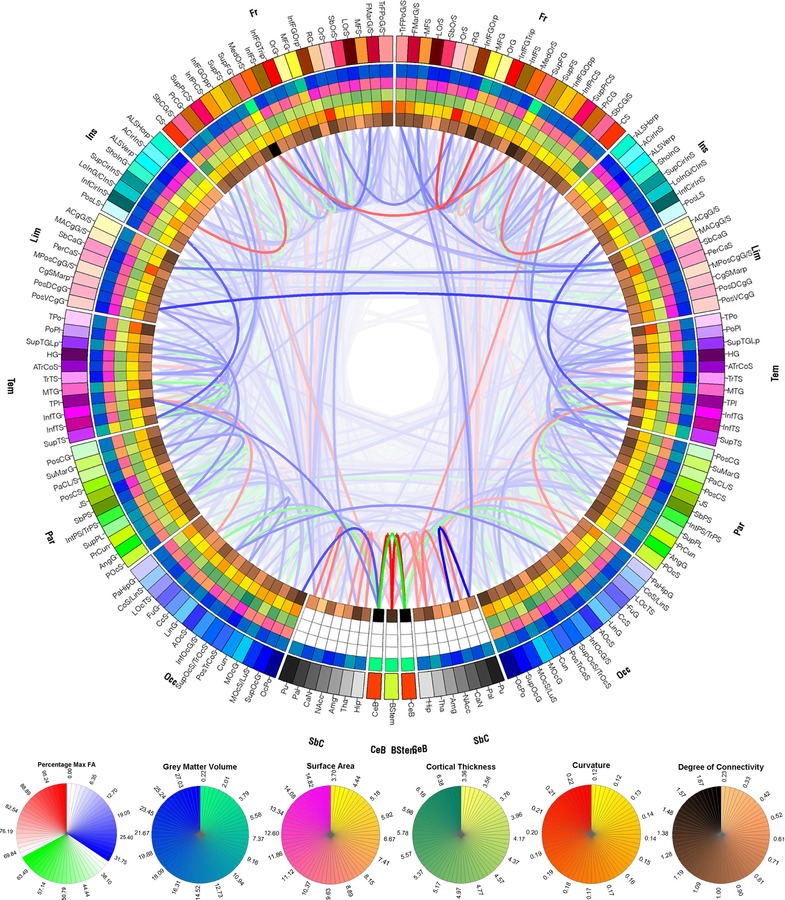 Our brains are wonderfully and complexly connected, and the cutting-edge research currently revealing the connectome is leading us to highly objective assessment using quantifiable biomarkers. This will not only yield a more refined and sophisticated definition of pathology, but may lead to much more personalised treatments in the days to come.