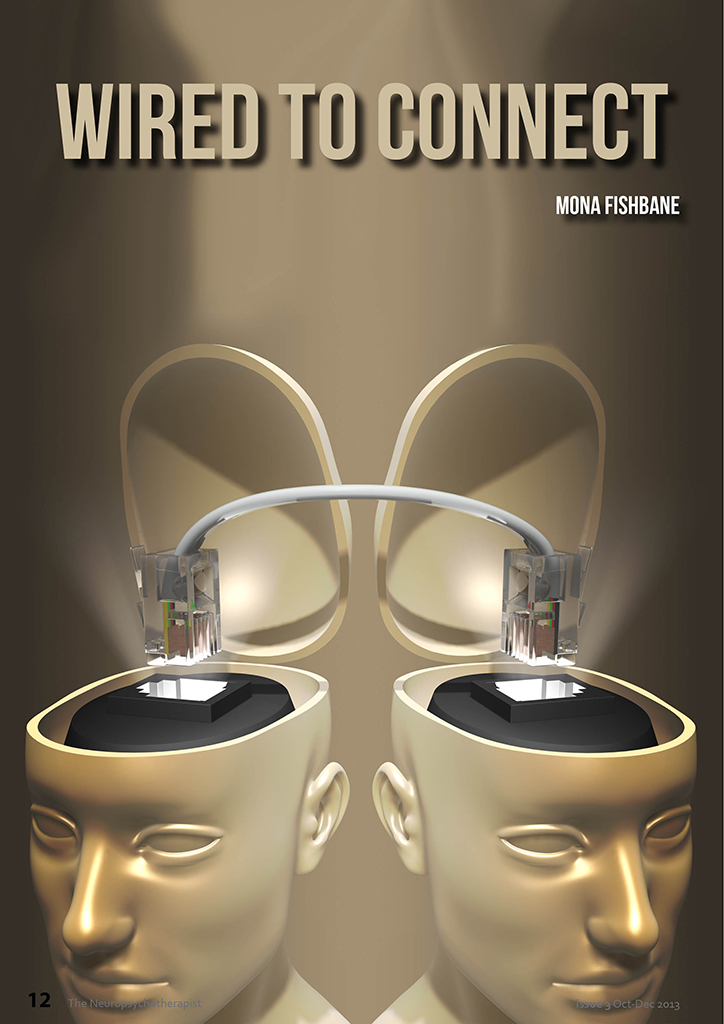 Humans are social animals. Our species developed in social groups; it has been suggested that our relatively big brains evolved to cope with the vast amount of information we need to process our interactions with others. Furthermore, in early human evolution, as our forebears left the trees and walked upright on the savanna, the female’s pelvis had to grow smaller for her body to balance on two feet. This meant that the birth canal was narrowed as well. But at the same time, the infant’s head size was growing to accommodate the greater complexity of group life. This larger head could not fit through the narrowed birth canal. So a compromise evolved: The baby would be born with a smaller head, essentially premature. The human infant—and its growing brain—thus required intensive caretaking by adults for a much longer time after birth than other young animals needed. This new arrangement, in turn, necessitated a caretaking system that would ensure bonding between parents and infant (and support from other adults as well) during the young child’s long period of dependence. Thus, we evolved as an intensively caretaking species, with a complex “affiliative neurocircuitry” (Taylor, 2002).

Our need for others and our social connectedness extend far beyond the parent–child bond. Scientists believe that our evolutionary success is related to our social nature. By learning how to coordinate our needs, thoughts, and feelings with others, we greatly expanded our survival options. The import of the group for our survival is so vital that much of our brain activity is devoted to reading the intentions of others and finding a way to fit in and be accepted. This leads Daniel Siegel to call the brain the “social organ of the body” (Siegel & Hartzell, 2003, p. 97). Despite the “optical delusion” that we are separate, individual creatures, our very existence is intertwined with others (Albert Einstein, quoted in Siegel 2010a, p. 255). Rejection in our ancient forebears could mean death, as a solo human could not survive outside the group (Goleman, 2006). As we have seen, neuroscientists have found that social rejection triggers physical pain centers in the brain (Eisenberger & Lieberman, 2004). The ecology to which humans have adapted is social. Our brains do not function in isolation; the separate-self idea is out of sync with the fundamentally social nature of our brains.

The Brain is Wired through Connection

The baby’s brain is wired through connection with parents and caregivers: “Human connections create neuronal connections” (Siegel, 1999, p. 85). The baby is born with the brain stem and basic reflexes working and with the emotional brain or limbic system partially developed. The circuits of the emotional brain are the focus of devel- opment in the first year and are highly malleable in the context of parental care and attunement. In the second year, left-brain and higher prefrontal circuits begin to develop, along with the hippocampus, the seat of memory. The baby—and its brain—needs attachment with parents or other primary caregivers to develop properly. Most of the early interactions between parent and infant involve right-brain– to–right-brain interactions (Schore, 2003), as the empathic attunement of parents facilitates the building of neural circuits in the baby’s brain. During this process, especially when combined with gentle touch and skin-to-skin contact, the bonding effects of oxytocin and other soothing hormones and neurotransmitters are released in baby and parent, facilitating attachment between the two.

The baby is an active partner in this early dance of attachment, instinctively connecting with parents: “Seeking proximity to a care- giver and attaining face-to-face communication with eye gaze con- tact is hard wired into the brain from birth. It is not learned” (Siegel, 1999, p. 138). One of the baby’s reflexes is to smile, which helps the parent fall in love with this endearing creature; it is one of nature’s ways of ensuring the attachment so necessary for the child’s survival (Tronick, 2007). The baby’s reflex smile stimulates the parent’s smile, as a positive loop is created between the two. The voluntary, social smile develops later. Seeing the parent’s face releases high levels of endogenous opiates in the baby’s brain. The parent–child interaction sets off biochemical processes that stimulate neural growth in the baby’s brain. The influence between baby and parent is mutual; they engage in a “lyrical duet” as they shape each other—and each other’s brain—in this new relationship (Cozolino, 2006). Parent and baby co-regulate each other and co-create each other’s affect in a circular manner.

This attachment relationship allows the parent to help regulate the infant’s emotions. As the parent identifies what is upsetting the baby (one of the many challenges new parents learn is to distinguish the hungry cry from the wet diaper cry from the tired cry) and soothes the baby’s distress, the infant learns that its discomfort will not last forever and comes to associate the parent’s soothing voice and touch with an easing of distress. This “dyadic regulation” (Siegel & Hartzell, 2003) helps the child build internal structures that ultimately result in self-regulation, the ability to self-soothe when upset.

What happens when this delicate dynamic of attunement and attachment goes wrong? What is the impact on the child of misattunement, neglect, or abuse instead of soothing and safety at the hands of the parent? Animal research has been very instructive on this question. From Harlow’s classic experiments with monkeys raised in isolation to recent studies by Michael Meaney and colleagues with rats, research shows that mammals raised by absent or neglectful mothers suffer as adults. Rat pups that are well licked and groomed by their mothers (licking and grooming are the rat equivalent of good parenting) have a resilient response to stress as adults. Pups of neglectful mothers become anxious adults (Begley, 2007). These dif- ferences continue into the next generation; the pups raised by inattentive mothers are neglectful of their own pups. As Meaney put it, “you do become your mother” (Meaney, quoted in Begley, 2007, p. 169). Remarkably, these intergenerational effects of maternal attentiveness or neglect actually affect the functioning of the genes of the offspring. This research shows that the impact of maternal neglect changes the ex- pression of genes in the next generation. Meaney (quoted in Begley, 2007, p. 172) notes, “Genes can be silent, or they can be very active. What determines the activity of the gene is the environment. And that’s what is modified by parental care: the chemical environment in which the gene functions.” In another fascinating turn of this re- search, pups that are born to neglectful mothers but adopted out to attentive mothers thrive like pups born to and raised by attentive mothers. Clearly the experience of being raised by an attentive mother—the rat equivalent of secure attachment—is what matters, not just the genetic makeup or biology of mother and baby.

The importance of attunement and secure attachment for the human child’s development cannot be overstated. The impact of early abuse or neglect is devastating to the child’s growing brain (Perry, 2001, 2002; Teicher et al., 2002). The chronic or severe stress of trauma and neglect can affect the young child’s hippocampus, impairing memory and cognition. If the stress is long-lasting enough, the damage may become irreversible. Nurture matters. We need loving, safe, intimate contact with others for the brain to develop properly. This process of brain wiring through interactions with others continues beyond infancy; indeed, it continues throughout life.

We Are Wired to Connect

We do not leave our need for others in childhood. Current research indicates that humans are interdependent at all ages. Studies of adult- hood and aging all point to the vital role of friendship and social connection for adult health, well-being, and longevity. Loneliness is particularly toxic to one’s health (Cacioppo & Patrick, 2008). John Cacioppo, one of the founders of the field of social neuroscience, suggests that loneliness has evolutionary value for our species. Like thirst or hunger, loneliness causes distress that prompts us to remedy the problem, to seek out others and rejoin the group. Since social belonging is vital to our survival, loneliness plays a role in keeping us connected. We are meant to connect, and we respond to disconnection or distressed relationships at a deep level. Our pain from relational unhappiness is registered in our very bodies.

While neuroscience research finds that humans are fundamentally relational creatures, narratives of the dominant US culture depict the autonomous adult as achieving separation/individuation in adolescence and then functioning independently in adulthood. As Johnson (2008, p. 253) puts it, “We are building a culture of separateness that is at odds with our biology.” The myth of the rugged individual self is reflected in older developmental theories that overemphasize separation and autonomy as hallmarks of adult development, pathologizing dependency beyond the adolescent years. But current theories of development are more relational (Fishbane, 2001; Jordan, 2010) and dovetail with the neuroscientific perspective that we need others throughout the life cycle. The new fields of interpersonal neurobiology and social neuroscience provide abundant research that supports this relational view.

These contrasting perspectives on independence and interdependence are not merely academic; they are lived out in the lives of couples. Raised in a culture that privileges autonomy, independence, competition, and zero-sum games, Erik feels threatened when Lisa wants connection. Especially when her bid for closeness is couched in hostile or critical terms, Erik senses that she is treading on his autonomy and he defends himself. His amygdala reaction is shaped in part by the cultural assumptions that surround him: He wants to be master of his own ship, not to be pushed around by a woman. Lisa, whose sole source of comfort as a child was her interdependence with her sister Cathy, and who as a female has cultural permission to seek closeness, is befuddled by Erik’s rejection of her bid for connection. Before her bids turned sour and hostile, Lisa had tried to reach out to Erik for support and empathy as she navigated the shoals of young motherhood. When she was rebuffed by Erik’s distance, she felt ashamed for her “neediness,” as she had in childhood with her parents. In the face of Erik’s unavailability and her own ambivalence about her right to depend on him, Lisa turned against Erik and protected herself. Thus, a gulf opened up between these partners, as their blocked human need for interdependence devolved into a battle for control, a zero-sum game. Instead of oxytocin coursing through this couple, cortisol, the stress hormone, is fueling their anguished disconnection.