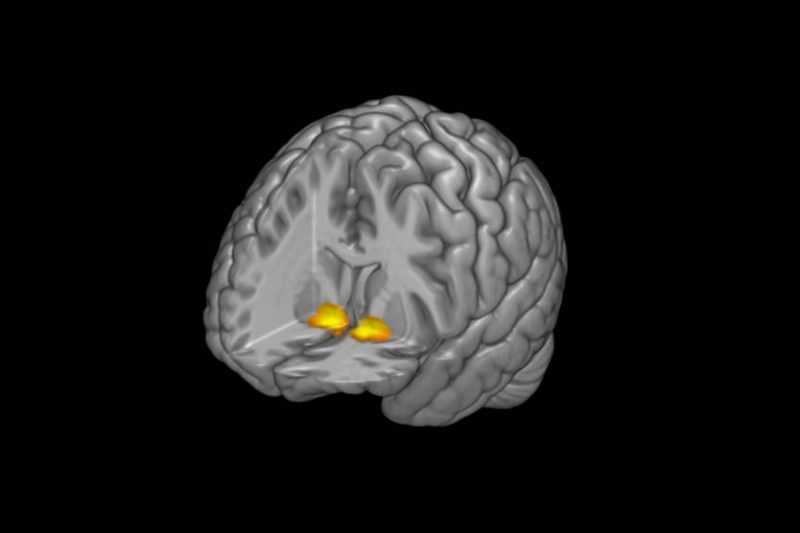 Higher activity in the ventral striatum, the brain’s reward center, may buffer some individuals against the negative mental health effects of poor sleep ©
Annchen R. Knodt

Poor sleep is both a risk factor, and a common symptom, of depression. But not everyone who tosses and turns at night becomes depressed.

Individuals whose brains are more attuned to rewards may be protected from the negative mental health effects of poor sleep, says a new study by Duke University neuroscientists.

The researchers found that college students with poor quality sleep were less likely to have symptoms of depression if they also had higher activity in a reward-sensitive region of the brain.

“This helps us begin to understand why some people are more likely to experience depression when they have problems with sleep,” said Ahmad Hariri, a professor of psychology and neuroscience at Duke University. “This finding may one day help us identify individuals for whom sleep hygiene may be more effective or more important.”

The paper appeared online Sept. 18 in the Journal of Neuroscience.

Electrical stimulation of the VS has been shown to reduce symptoms of depression in patients who are resistant to other forms of treatment, and earlier studies by Hariri’s team show that people with higher reward-related VS activity are more resilient to stress.

“We’ve shown that reward-related VS activity may act as a buffer against the negative effects of stress on depressive symptoms,” said Reut Avinun, a postdoctoral researcher in Hariri’s group at Duke and the lead author of the study. “I was interested in examining whether the same moderating effect would also be seen if we look at sleep disturbances.”

Avinun examined the brain activity of 1,129 college students participating in the Duke Neurogenetics Study. Each participant completed a series of questionnaires to evaluate sleep quality and depressive symptoms, and also completed an fMRI scan while engaging in a task that activates the VS.

In the task, students were shown the back of a computer-generated card and asked to guess whether the value of the card was greater than or less than five. After they guessed, they received feedback on whether they were right or wrong. But the game was rigged, so that during different trials the students were either right 80 percent of the time or wrong 80 percent of the time.

To tease out whether general feedback, or specifically reward-related feedback, buffers against depression, the researchers compared VS brain activity during trials when the students were mostly right to those when they were mostly wrong but still received feedback.

They found that those who were less susceptible to the effects of poor sleep showed significantly higher VS activity in response to positive feedback or reward compared to negative feedback.

“Rather than being more or less responsive to the consequences of any actions, we are able to more confidently say it is really the response to positive feedback, to doing something right, that seems to be part of this pattern,” Hariri said.

“It is almost like this reward system gives you a deeper reserve,” Hariri said. “Poor sleep is not good, but you may have other experiences during your life that are positive. And the more responsive you are to those positive experiences, the less vulnerable you may be to the depressive effects of poor sleep.”