Wait For It: Serotonin and Confidence at the Root of Patience in New Study 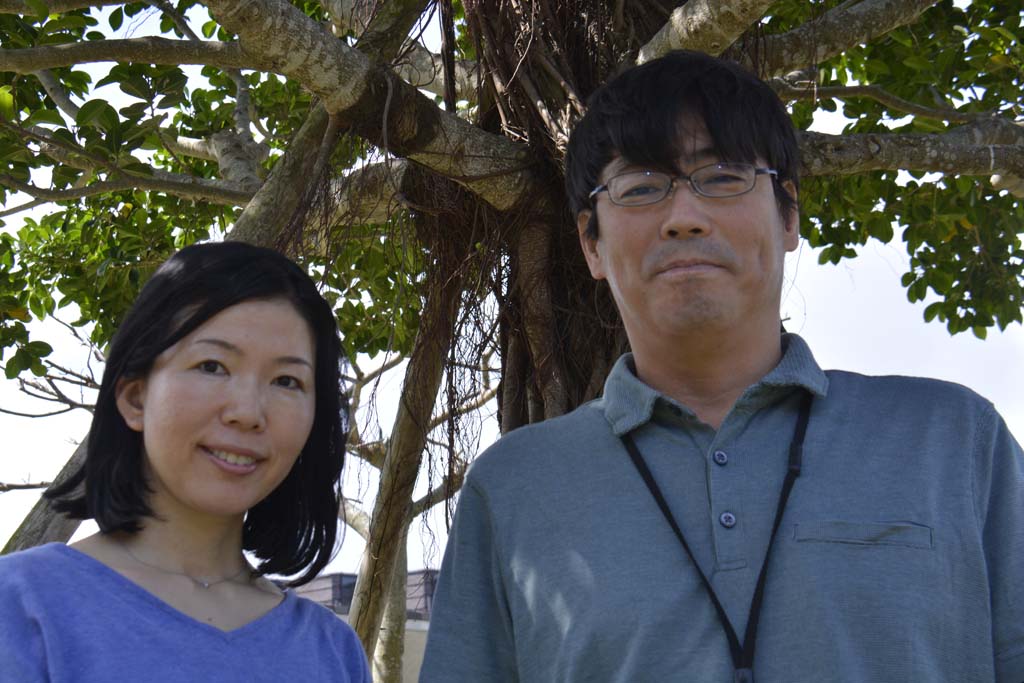 Serotonin keeps mice hanging on if they are sure of getting rewards, but not sure when.

Just a little longer. It’s a common experience: hanging on in the hopes that our patience will pay off in the end. From waiting from a restaurant seat to queuing at a theme park, we’re all able to put our desire for immediate gratification to one side when we know there’s something good coming up. Most of the time. But this isn’t just a human trait – a new study shows that mice can be patient too, and reveals a link between the brain’s chemical system and the mice’s belief about how waiting will pay off.

The effect of neuromodulator serotonin on mice’s ability to stay patient when waiting for a reward is at the core of a new study published in Nature Communications. The authors, Dr. Katsuhiko Miyazaki and Dr. Kayoko Miyazaki, analyzed how the rodents behaved under the influence of serotonin, as part of a study conducted in the Neural Computation Unit at the Okinawa Institute of Science and Technology. 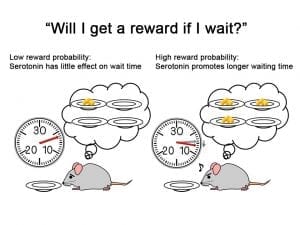 Serotonin is a chemical messenger that influences neuron functions. It has been linked to a huge array of behaviors, from mood and sleep, to cravings and spontaneity. The power of the chemical over human behavior has made it a key focus in the treatment of mental conditions, such as depression by selective serotonin receptor inhibitors (SSRIs), which slow down the reabsorption of serotonin and keep it active in the brain.

“Serotonin has had a lot of study in pharmacology, and serotonergic drugs are commonly prescribed,” said Katsuhiko Miyazaki, “but the role that serotonin has over behavior isn’t clear”. The team investigated for a causal relationship between serotonin levels and behavior in mice.

The mice were trained to perform a task to obtain a food reward: place their nose into a small hole and wait – dubbed a “nose poke”. After a pre-set duration, the reward was delivered. In a previous study, the team used a method called optogenetics, a method which allows scientist to use light to stimulate specific neurons with precise timing. These neurons are genetically modified to a produce a light-sensitive protein that are then stimulated by shining light along a fiber optic implanted in the brain. In the study, serotonin-producing neurons were optogenetically stimulated in a part of the brain called the dorsal raphe nucleus (DRN), which output widely to the forebrain. The result was that increasing the activity of serotonin neurons in the DRN drastically increased the amount of time mice were willing to wait for a food reward.

While the study showed that serotonin increased patience, the latest study tested whether mice respond similarly in circumstances when getting a reward was uncertain. Would mice wait for food regardless of the probability and timing of it turning up, or would they give up if they predicted a low chance of return on their time investment?

The new trials showed there are limits to serotonin’s ability to enhance patience. Mice were given a nose-poke trial with a 75% chance of a reward, with a 3 second waiting period before the reward was delivered. When these mice were subject to a no-reward outcome, their waiting time was prolonged, as expected from the previous paper. However, in tests where the chance of reward delivery following a nose-poke was 50% or 25%, increasing serotonin had no effect on the mice’ waiting time. “The patience effect only works when the mouse thinks there is a high probability of reward” said Dr Miyazaki.

They also found that serotonin stimulation made the mice to wait longer when the timing of a reward was harder to predict. In a test with a 75% chance of getting a reward, in some sessions mice were rewarded after precise periods, while in other sessions they were rewarded after randomized timing. The extended waiting times by serotonin neuron stimulation were more prominent when the reward timing was randomized. (Fig. 2). 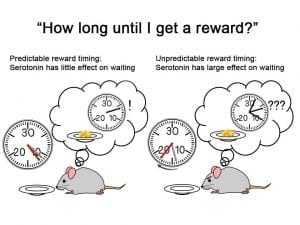 To help explain the results of their experiment, the team constructed a computational model to coherently explain the experimental data. In the model, the mice were able to expect when a food reward would be delivered, and to judge when they were subject to a no-reward trial.  The model could reproduce the experimental results by assuming that serotonin affects the mice’ confidence of receiving a reward when their subjective confidence is high. In a 75% reward probability trial, for example, serotonin made the mice behave as if there was a 95% chance of reward.

The model also reproduced the result of timing uncertainty. When the mice were uncertain of the timing of when a reward would be delivered, it became difficult for them to judge whether they were waiting in a reward trial or no-reward trial. Serotonin stimulation increased the mice’s belief that they were in a reward trial, delaying their judgement further as reward timing was less clear.

The findings show that the relationship between the activation of serotonin and subsequent behavior is highly dependent on the animals’ belief about the circumstances. These results may have implications for our understanding of how humans taking serotonin boosting drugs can also be affected. “This could help explain why combined treatment of depression with SSRIs and Cognitive Behavior Therapy (CBT) is more effective than just SSRIs alone,” said Dr. Miyazaki. “The psychological boost of the therapy is enhanced by raised serotonin levels.”