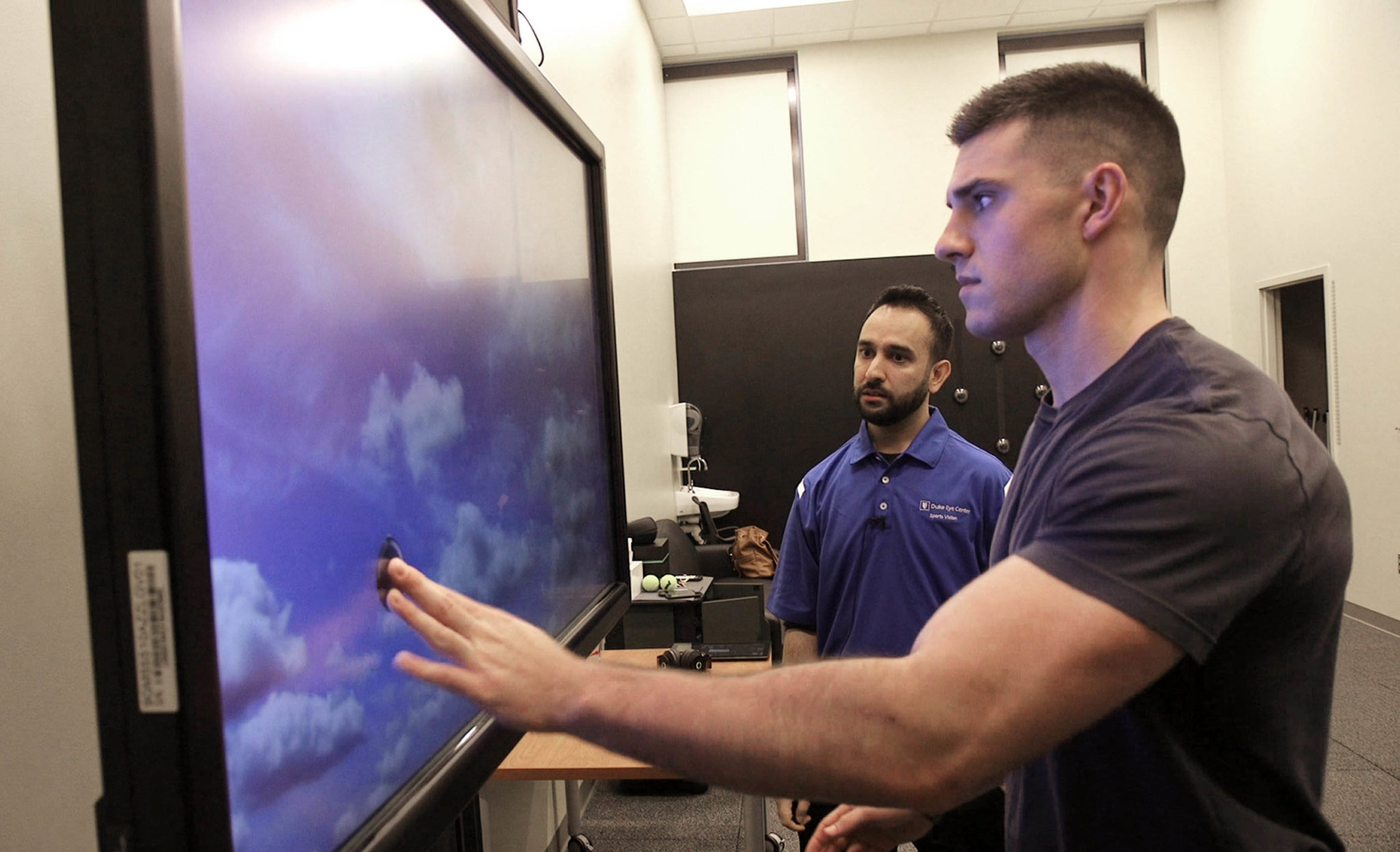 Duke Health researchers found players with higher scores on computer-based vision and motor tasks had better on-field performance. In this photo, a Duke student demonstrates some of the tasks © Shawn Rocco, Duke Health

New research from Duke Health suggests baseball scouts looking for a consistent, conscientious hitter may find clues not only in their performance on the field, but also in front of a computer screen.

In a study of 252 baseball professionals published Jan. 8 in the journal Scientific Reports, Duke researchers found players with higher scores on a series of vision and motor tasks completed on large touch-screen machines called Nike Sensory Stations, had better on-base percentages, more walks and fewer strikeouts — collectively referred to as plate discipline — compared to their peers.

“There has been a data revolution in the game of baseball over the past decade with the introduction of technologies that track the speed and movement of every pitch, the location of players in the field, and other tools that can quantify player performance like never before,” said lead author Kyle Burris, a Duke statistician and Ph.D. candidate.

“In this study, we wanted to quantify the links between an athlete’s senses such as eyesight and motor control using task scores and game performance,” he said. “We found positive relationships between several tasks and performance for hitters, but not for pitchers.”

The players were on U.S. major and minor league teams. They used large touch-screen stations to complete nine exercises, many of them resembling two-dimensional video games where users track or touch flat shapes as they scoot across the screen.

The tasks test a person’s ability to glean information from a faint object or in a split second — akin to deciphering a pitcher’s grip the moment before he hurls an 80-mph curveball — plus skills such as reaction time and hand-eye coordination, said Burris, who will further his interest in baseball statistics this summer as an intern with the Cleveland Indians.

The researchers found that overall, better performance on tasks predicted better batting performance for measures of plate discipline, such as on-base percentage, strikeout rate and walk rate, but not slugging percentage or pitching statistics.

“The Sensory Station is one such device that can be used to link visual skills to on-field performance and provide information to individuals about how their skills compare to peers who might play the same sport and position at the same level.”

“We can’t say there’s a causal relationship between higher scores on the tasks and performance in games, but there was an association in the real-world data we evaluated,” Burris said. “Regardless, this information could be useful in scouting, as well providing possible training targets to improve on-field performance.”

Although research on the effectiveness of visual training for athletes is limited, sports teams have used the strategy for decades.

“The marketplace for devices had an early genesis in analog tools,” said cognitive neuroscientist L. Greg Appelbaum, Ph.D., the study’s senior author and associate professor in psychiatry and behavioral sciences at Duke. For example, trainers might challenge players to read words off a baseball being flung their way, or lead drills where players snap their attention from a close ball to one that’s far away, he said.

“In the past five years or so, we’ve moved to a digital realm where there are all kinds of new tools that provide new context for training, such as virtual reality, perceptual learning video games and brain training,” Appelbaum said. “The Sensory Station is one such device that can be used to link visual skills to on-field performance and provide information to individuals about how their skills compare to peers who might play the same sport and position at the same level.”

Scientists fiercely debate whether superior visual processing is hardwired, or whether it can be improved by training. Appelbaum and colleagues have recently launched the Duke Sports Vision Center, a clinic and lab where researchers will evaluate the effectiveness of visual training through technologies currently being used by professional athletes. The lab includes new versions of the sensory stations in the study (now made by Senaptec), immersive virtual reality and more.