Vertical and Horizontal Integration in Psychotherapy

Vertical and Horizontal Integration in Psychotherapy

An integrative attitude toward psychotherapy is now the norm for practitioners, and with good reason.  Research has demonstrated that no single school obtains systematically better outcomes than the others.  Instead, what is important in generating good psychotherapy outcomes is the therapeutic alliance.  Although some interpret this as saying the key factor is the quality of the relationship, that is not exactly what is meant by the alliance.  Instead, the alliance refers to three related but conceptually separate domains of the work.  The quality of the relationship (i.e., trust, respect, and a mutual liking between the therapist and patient) is one element, but it is only one element.  The second key element of the alliance is a shared conceptualization, which refers to a narrative that both the therapist and patient have for understanding the nature of the problem and the goals that orient the work.  The third piece of the alliance is the tasks and specific interventions that organize the work toward achieving desirable outcomes.  This way of thinking about therapy is often called the “common factors” approach, and it has been very influential in moving the field toward a more integrative approach.  In broad strokes, we can now see psychotherapy as the process by which individuals who are having trouble functioning and are in distress enter into a trusting, respectful relationship with a professional knowledgeable about the science of human psychology and various interventions that promote change toward more adaptive living. [private] 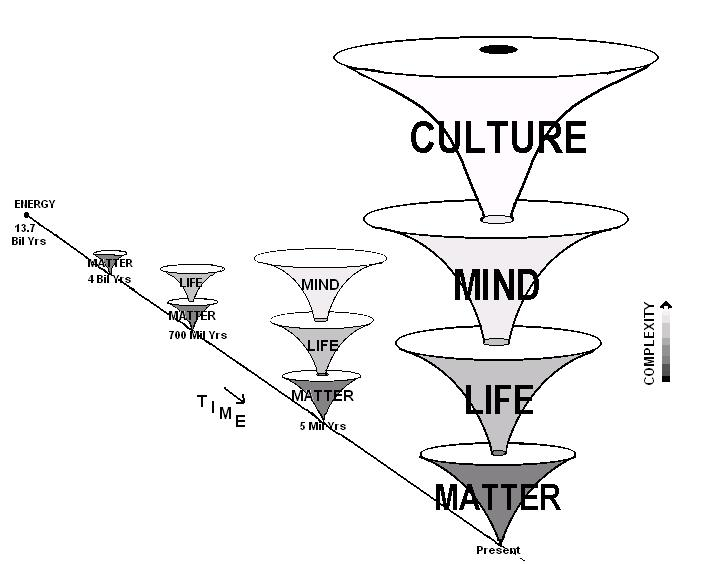 Although this is a helpful general frame, one problem that remains for the integrative practitioner is the sheer volume of paradigms, perspectives, methods, techniques, philosophies, disorders, and so on, that populate the field.  How can one build good conceptualizations and choose good interventions, given the enormous volume of information in the field?  One potentially useful way to organize the ocean of information available is to think in terms of vertical and horizontal integration.  Vertical integration refers to the nested levels of complexity that are operating for every human being.  It is commonly referred to as the “biopsychosocial” approach, and it provides an essential lens to understand the context of the patient, the problems, and goals.  Although many people advocate for a biopsychosocial approach, many fewer articulate exactly what is meant by the levels, where there are divisions between them and why.  A model I have developed, called the Tree of Knowledge System (Figure 1; Henriques, 2011) provides a way to explicitly understand both how we can conceptually differentiate the biological from the psychological from the social, and why it really does correspond to nature.  Why, according to the ToK System, are there different dimensions of complexity in addition to different levels of analysis?  The reason is because each dimension of complexity emerges as a function of different systems of information processing: genetic information processing gives rise to the dimension of Life (biology), neuronal information processing gives rise to the dimension of Mind (psychology), and symbolic information processing gives rise to the dimension of Culture (social).

The biological dimension can be broken down into three related domains: the evolutionary history which shaped the general adaptive structure of the human species, the unique genetic make-up that predisposes the individual toward certain tendencies, and the neurophysiological processes that mediate psychological behavior.  Similarly, the socio-cultural dimension can be usefully divided into nested levels of context, with the micro-level referring to the immediate relationship context (i.e., one’s family, friends, and loved ones); the meso-level referring to the nature of the community, industry, and basic technological and economic structure; and the macro-level referring to the values, traditions, laws, and policies that define the cultural zeitgeist.

The psychological dimension refers to the learning and developmental context of the individual, including early formative events, key relationships, traumas, triumphs, and important transitions.  For an effective, holistic conception, it is useful to draw from across the major traditions.  This is what I mean by horizontal integration.  The four major paradigms that guide psychotherapy with individuals are: behavioral, cognitive, humanistic, and psychodynamic.  Figure 2 offers a schematic that depicts the vertical and horizontal elements. 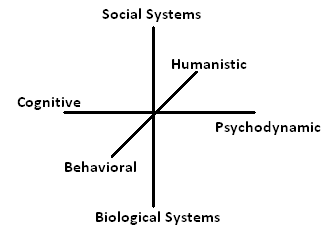 But is there a way to effectively integrate the insights from these paradigms in a coherent fashion?  Although an in-depth answer to this question requires much elaboration, the short answer that I give is that each major psychotherapeutic paradigm is really a framework for understanding how individuals adapt to their environment.  A view of personality functioning that emerges from my unified approach (Henriques, 2011) is that humans have five systems of adaptation that guide their transactions with the environment.  These are

It only takes a bit of training to learn how to identify these systems of adaptation and to learn how they relate to one another and use them to develop a holistic formulation that can guide treatment.

But what is particularly remarkable is that these five systems relate the key insights of the major paradigms.  The habit system clearly corresponds to the traditional focus of behaviorists.  The experiential system was the focus of the early Gestalt therapists, and now is exemplified in the neo-Humanistic experiential tradition exemplified by Emotion Focused Therapy.  The relationship and defensive systems correspond to the primary focus of modern psychodynamic perspectives.  And, finally, the justification system corresponds to cognitive approaches in terms of the beliefs and values that guide action.  Putting the vertical and horizontal elements together, an integrative map is offered in Figure 3. 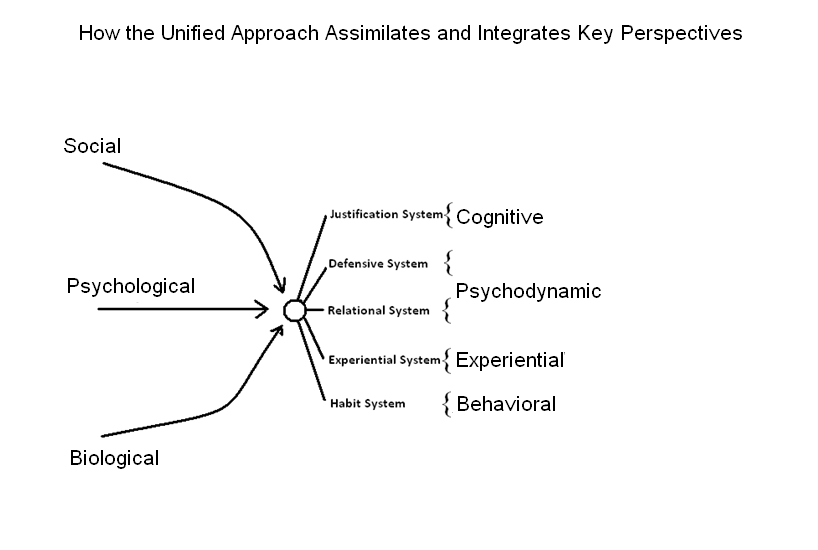 Given the overwhelming complexity of the current literature in psychology and psychotherapy, practitioners need models to help organize their thinking.  Approaching integration from the vertical and horizontal dimensions offers one way to make sense out of this complexity.