Unique patient offers insights into the brain’s quest to see 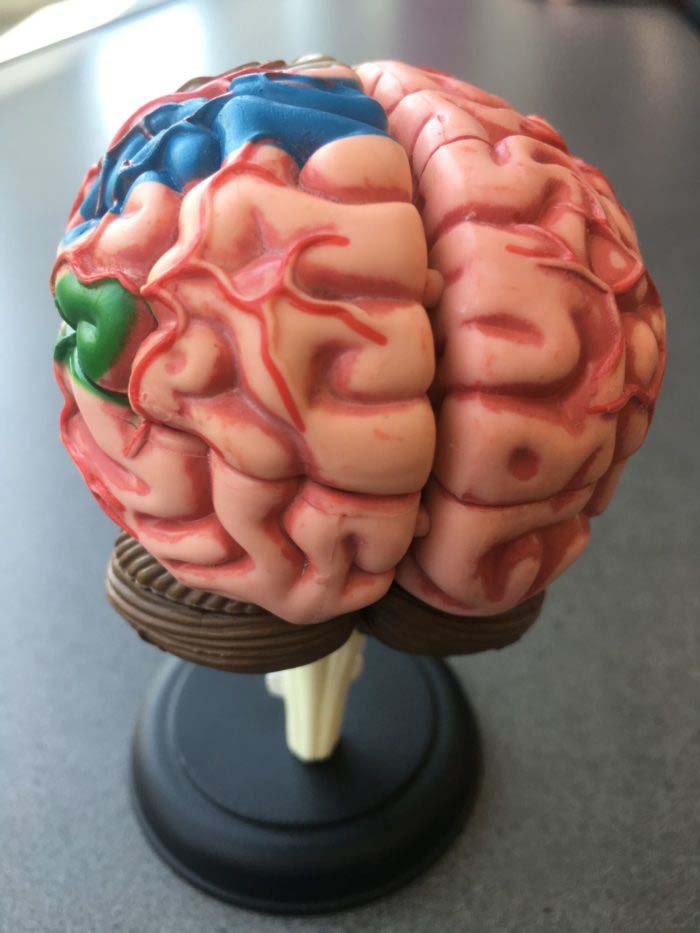 A patient missing most of her occipital lobes on both sides of the brain is helping researchers shed light on how the brain processes objects in motion.

When light streams through her window in just the right way, Milena Canning will sometimes stoop to pick up a shiny coin she has noticed on the wooden floor of her Glasgow-area home. But her hand comes up empty – the ‘coin’ is just a dancing sunbeam, a quirk of perception in Canning’s extraordinary world.

Canning lost her eyesight – at least, in the way anyone reading this story would perceive that word – when an infection, followed by strokes, made the visual-processing parts of her brain go dark.

You can see it on her fMRI scans. In people with typical vision, the occipital lobes at the back of the brain should show a burst of activity when they see pictures and movies. Canning is missing almost all the occipital lobes on both sides of her brain. Just a small part of her brain lights up to vision, but only when things are moving.

“Now we have the ability to use modern techniques – particularly magnetic resonance imaging and a variant of that called functional MRI – where we can look at the structure of the brain and, even more interestingly, the function of the brain.”

Remarkably, that allows her to perceive something most blind people cannot – objects in motion.

Her daughter’s bobbing ponytail, but not her daughter’s face. Rain cascading down a window, but not the world beyond the window. A ball rolling towards her, but not that same ball in her hand.

Canning has Western’s Brain and Mind Institute (BMI) to thank for unravelling how her brain has re-wired itself ­– after all her doctors, except one, had dismissed the peculiarities of her re-emerging vision as mere wishful thinking. Several years of detailed testing by BMI neuropsychologist Jody Culham and her team have led to a newly published paper about Canning’s brain in the journal Neuropsychologia.

“This may be the richest characterization ever conducted of a single patient’s visual system,” Culham explained. “She has shown this very profound recovery of vision, based on her perception of motion.”

Beyond this one case, the team’s findings offer new understanding about the plasticity of the human brain, and how visual pathways can adapt even to catastrophic injury.

To the 48-year-old Canning, the findings offer confirmation and hope.

She was a healthy 30-year-old, working in an eye doctor’s office, when a respiratory infection escalated to a hospital admission, then strokes – and a two-month coma so dire a priest gave her last rites three times. The strokes profoundly damaged her visual centres, a fist-sized area at the back of her brain.

A few months after she returned home, however, a visitor arrived with a get-well gift in a shimmery gift bag. Caning jumped with surprise at its green glint, as intense and unexpected as a flash of lightning.

But when uneventful months passed, Canning and her family conceded that, whatever it had been, it wasn’t a return of her eyesight.

Then she began to sense – fleetingly, sporadically, like the merest memory of a memory of a thing – objects in motion. Water dripping from a tap or swirling down a bathtub drain. Fireworks of colour appearing suddenly and vanishing just as quickly.

Her doctors insisted her brain was deceiving her; it happens sometimes when people have lost their vision. “They didn’t believe me,” Canning said from her home in Scotland. “That’s when I said, ‘You’ve got to get an ophthalmologist to test my eyes because I’m telling the truth.’”

Gordon Dutton, a Glaswegian ophthalmologist aware of a rare condition called ‘blindsight’, conducted an unorthodox test by placing chairs in the hospital corridor and asking Canning to navigate around them. To the astonishment of them both, she could.

“As I was walking up to them, I thought there was something there and I knew I could either walk to the left or walk to the right to get ’round about it,” Canning recalled.

Dutton ‘prescribed’ her a rocking chair and horseback-riding as ways to nurture this new-found, motion-activated vision. Then he contacted Brain and Mind Institute Director Melvyn Goodale to see if his world-renowned neuroscientists could provide some answers

During the next several years, Canning underwent extensive testing at Western – through a team led by Culham, a specialist in how the brain transmits signals that guide a person’s movements. 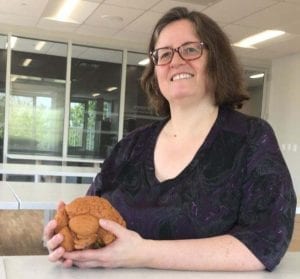 Brain and Mind Institute (BMI) neuropsychologist Jody Culham and her team are unlocking new understanding into the plasticity of the human brain, and how visual pathways can adapt even to catastrophic injury © UWO

Canning’s case is not considered ‘blindsight’, in which some blind people have a rare ability to see a form without being consciously aware they see it. Instead, the team determined Canning has a phenomenon that’s even more unusual – Riddoch syndrome, in which a blind person can consciously see an object moving but can’t see the form itself. Since it was first identified a century ago, only a few cases have been identified. None have been studied so extensively as this.

“Now we have the ability to use modern techniques – particularly magnetic resonance imaging and a variant of that called functional MRI – where we can look at the structure of the brain and, even more interestingly, the function of the brain,” Culham said.

In Canning, anatomical MRIs showed, “she’s really had a profound knockout to a huge critical portion of the visual system. She was missing a piece of brain tissue about the size of an apple at the back of her brain. And it was almost her entire occipital lobes, which process vision,” Culham explained.

In normally sighted people, visual information travels along a pathway from the eyes to the middle of the brain and then to the back of the brain, where the occipital lobes are, she added.

“In Milena’s case, we think this ‘superhighway’ for the visual system reached a dead end. But rather than shutting down her whole visual system, she developed some ‘back roads’ that could bypass the superhighway to bring some vision – especially motion – to other parts of the brain.”

That’s how, when Culham’s team soundlessly rolled a white ball across a white table, Canning’s brain recognized the motion and the size of the ball and responded by telling her hand to open and intercept it at just the right time. When Culham tossed a ball to her, she caught it.

Yet Canning was successful only about half the time when asked to identify if someone’s hand in front of her showed thumb-up or thumb-down, or whether the person in front of her was wearing glasses.

“It’s strange some of the tests that they do, but I suppose that’s science for you,” Canning said with a laugh.

Even she finds it difficult to describe what she perceives in these fuzzy-edged bursts of light. “I can’t see like normal people see or like I used to see. The things I’m seeing are really strange.

“Every time, I question ‘why am I seeing this, why am I not seeing that?’ There must be something happening and something trying to rewire itself or trying a different pathway.”

Culham said the research suggests terms such as perception, awareness, consciousness and vision may have fuzzier edges than previously thought. “Our language isn’t always rich enough to capture the nuances or the possibilities. Patients like Milena help us realize vision isn’t an all-or-none thing. There are different aspects of vision, different aspects of awareness and there are things we are not aware of.”

During the past 18 years, Canning’s abilities have dramatically improved but still remain frustratingly basic. She can see clothes swirling around through the glass door of the washing machine and steam rising from her morning cup of coffee.

“It’s all these small things I’m seeing, but why can’t I see people’s faces? You can sit right beside me and if we look at each other straight on I see your eyes blinking and I see your mouth moving when you talk. But I don’t get the full, proper face.

“It’s as if I’m seeing silly, wee things. But the best things I want to see, the important things, I just don’t see.”

Still, she holds out hope her brain will continue finding new work-arounds.

She would like to return to Canada for more testing, to understand how her neural pathways may have changed even since her first scans. It’s not a research field available to her in Scotland nor, really, anywhere else in the world.

She is grateful to Dutton for his support and to Culham’s team at BMI for its ongoing expertise. “If not for them, we wouldn’t know anything about my condition. They believed me. It’s a shame I had to go all the way to Canada for somebody to believe me, but I’m glad I did it.”

Meantime, she hopes to be able one day to see the face of her daughter, who is now an adult, or watch a soccer match with her husband and see more than the fleeting flash of a goalie’s jersey.

“At the end of the day I just look at it as I’m here and I’m alive and I shouldn’t have been. With the sight I’ve been left with, I just decided to get on with it.  “

Culham, meanwhile, said Canning’s experience is instructive for brain scientists. “There are so few (Riddoch) cases in general that any additional case helps. And she is a total delight to work with.

Being able to map 30-40 visual areas in the human brain – with research expertise from London (Ont.), Glasgow, Maastricht, Princeton and Durham ­– has been a windfall for brain science and instructive about the brain’s plasticity, she said.

For patients and health professionals, this also raises possibilities that introducing therapies using motion for people with similar traumatic brain injuries may improve function and quality of life, she said.