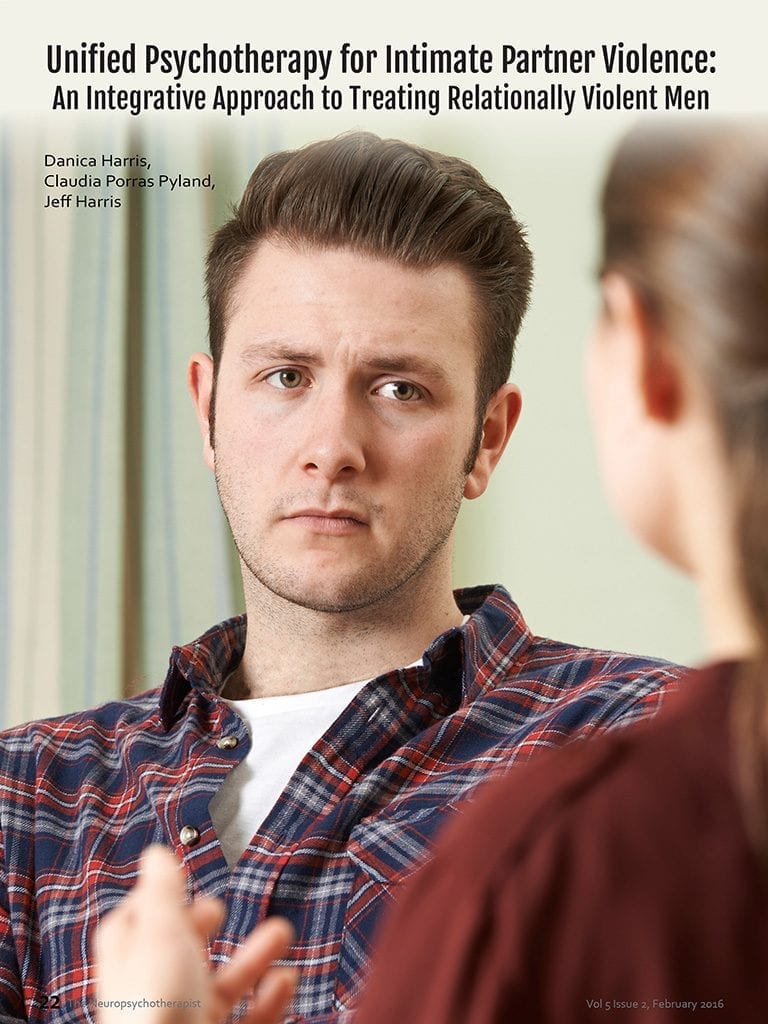 Intimate Partner Violence (IPV) is a complex phenomenon that results from maladaptive thoughts, feelings, and actions that are shaped by interpersonal and sociocultural factors. Therefore, it is important to understand the interaction between (a) cognitive concepts like core beliefs, (b) affective factors like emotional awareness and regulation, (c) behavioral patterns like dominance and control, (d) interpersonal dynamics such as multigenerational violence, and (e) sociocultural influences like gender role socialization. This article will introduce five sets of key strategies that can be used to treat IPV with relationally violent men (RVM).
Traditional treatment for relational violence has been based on a criminal justice model. Currently, the most frequently used interventions for IPV explore thoughts, actions, and culture. The existing models lack a comprehensive map of human behavior and are ineffective at reducing rates of IPV. The treatment approach outlined in this article is intended for use in individual or group psychotherapy with perpetrators of IPV. This article proposes that by utilizing a more comprehensive framework in the treatment of IPV, psychotherapists may be better equipped for working with RVM.

Intimate partner violence (IPV) is a world wide problem that affects the lives of women, men, and children (Breiding et al., 2015). Collective reports indicate that roughly 45 million people worldwide are victims of intimate partner violence at some point in their lifetime (Breiding et al., 2015). IPV is a complex phenomenon that results from maladaptive thoughts, feelings, and actions that are shaped by interpersonal and sociocultural factors. In order to effectively treat IPV, it is important to understand the interaction between (a) cognitive concepts like core beliefs, (b) affective factors like emotional awareness and regulation, (c) behavioral patterns like dominance and control, (d) interpersonal and systemic dynamics such as multigenerational violence, and (e) sociocultural influences like gender role socialization. By looking at these factors together, psychotherapists can treat clients holistically and select interventions based on the unique needs of each client (Adams, 1988; Dutton & Corvo, 2007). While violent behavior in relationships may be mutual, significant research explores the patterns of violence that exist in intimate partner relationships, and the common gender dynamics that lead to power and control. As men tend to commit the majority of intimate partner violence, this proposed comprehensive treatment model will focus on IPV treatment for relationally violent men (RVM; (Breiding et al., 2015; CDC, 2003).

Currently, the most frequently used interventions for IPV are geared towards men and follow a group format. Treatment is generally psychoeducational in nature and the focus is on reducing recidivism over advancing growth and wellness (Babcock, Green, & Robie, 2004). For understandable reasons, such a model aids in presenting batterers with consequences for their behavior but falls short in helping batterers work through the underlying causes for their harmful behavior. The most commonly used treatments are Duluth Model groups which are founded in feminist perspectives and utilize a psychoeducational  format, and Cognitive-Behavioral interventions, including anger-management groups (Babcock, Green, Robie, 2004; Pascual-Leone, Bierman, Arnold & Stasiak, 2011). In the following sections, we will identify the ways in which some of these models effectively treat IPV, as well as some gaps that could be addressed in a comprehensive treatment approach.

The philosophical foundation of the Duluth Model is to improve the lives of women by deconstructing the oppressive nature of gender dynamics within the greater culture (Miller, 2010). A chief goal of this model is to encourage RVM to transition from unhealthy, controlling, and manipulative behaviors into a pattern of non- threatening and nonviolent actions (Miller, 2010). This model advocates that violence is not merely a result of anger, but rather that violence is a systemic problem founded on gender inequality (Miller, 2010). The Duluth Model remains the most widely accepted treatment for men engaging in IPV, although multiple research studies indicate that recidivism rates for individuals who complete programs following the Duluth Model are not significantly lower than they are for individuals who are not referred to, or choose not to attend treatment (Babcock et al., 2004). The Duluth Model for treating RVM has, at times, been criticized for gender shaming and polarizing men and women, rather than working to extinguish problematic behaviors and explore cognitive distortions (Dutton & Corvo, 2007). Further, the Duluth Model lacks concerted attention to the role of interpersonal-systemic dynamics for RVM, and thus interpersonal patterns are not examined in enough depth to provoke significant and lasting change.
CBT treatment for IPV does focus on anger and, in fact, anger management is often a chief objective in perpetrator intervention (Dutton & Corvo, 2007). CBT interventionists also utilize Bowlby’s work on attachment when exploring anger, asserting that RVM experience heightened anger levels due to paternal rejection, inadequate attachment figures in their youth, and as a result of having previously witnessed violence (Dutton & Corvo, 2007). Further, CBT group practice is likely to examine the preoccupation RVM have with their partners’ behavior (Sonkin & Dutton, 2003). This model almost exclusively attends to the cognitive distortions of the client and the unhealthy behaviors that follow as a result (Dutton & Corvo, 2007; Sonkin & Dutton, 2003). While this treatment model may be effective for immediately reducing aggressive behavior, it neglects to fully examine the origin of IPV such that cultural, systemic and interpersonal factors are viewed as an unnecessary treatment focus (Dutton & Corvo, 2007).

Most state-approved perpetrator treatment is provided as a group intervention (Adams & Cayouette, 2002). Although couple’s treatment is not permitted in a number of states, some researchers and practitioners are focusing on the dynamics that exist within the relationship between a perpetrator and his partner (Babcock, et al., 2004). Specifically, couple’s therapy for IPV examines the attachment style of the perpetrator and how that attachment style has influenced his actions within his current romantic relationship (Babcock et al., 2004). Additionally, couple’s therapy for IPV aims to explore the emotional experiences of both the perpetrator and the partner through structured interviews and assessment (Babcock, Jacobson, Gottman, & Yerington, 2000). While this treatment model addresses some of the interpersonal-systemic factors of IPV and attends to emotional awareness within couples’ relationship dynamics, it largely ignores the sociocultural, cognitive, and behavioral aspects of IPV. Further, couple’s therapy for IPV has been criticized for promoting continued control of the partner by the perpetrator as well as, in some cases, creating an environment wherein it is easy for psychotherapists to collude with RVM, thus not effectively promoting change (Carlson & Jones, 2010). Couple’s therapy may be a useful treatment modality to follow comprehensive individual or group treatment for IPV.

Overall, there has been little emphasis on interpersonal-systemic influences and only emerging attention to emotions in IPV treatment. While reducing IPV is a complex issue, with many detailed factors that may be at play in various ways in different relationships, the authors believe that this comprehensive treatment may be a necessary next step in approaching treatment for RVM. This article proposes that by utilizing a more comprehensive framework, psychotherapists may be better equipped for working with RVM who have committed IPV. By examining thoughts, feelings, and actions within a sociocultural and interpersonal-systemic framework, researchers are able to attend to all of the current focuses of IPV treatment, while incorporating some of the neglected elements.

This has been an excerpt from Unified Psychotherapy for Intimate Partner Violence. To read the full article, and more excellent material for the psychotherapist, please subscribe to our monthly magazine.