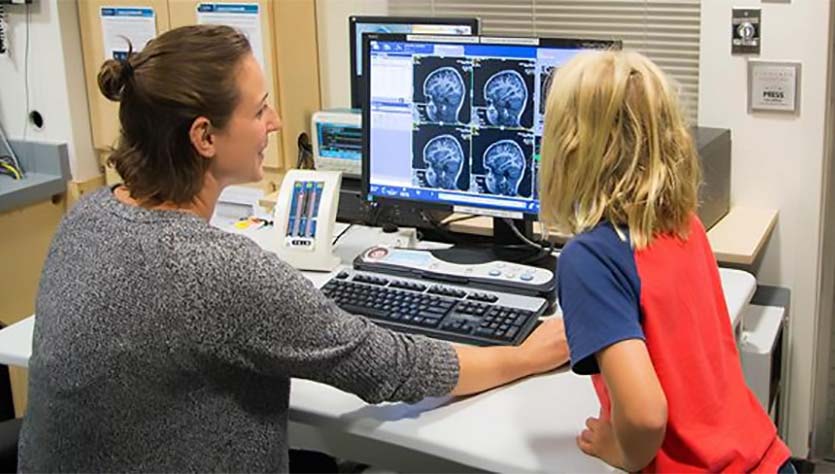 Sarah Reynolds, a research coordinator on Dr. Inna Fishman’s team, and a participant reviewed the child’s brain images after the scan © SDSU

Psychologist Inna Fishman’s research indicates the presence of biological markers in the brain in children with autism.

-AMAZONPOLLY-ONLYWORDS-END-
Think of the brain as a complex transportation hub, a place where neural traffic heads off in any number of directions to make connections while processing something as simple as a mother’s smile.

Now consider the same center in a child with an autism spectrum disorder (ASD). At a time different parts of the brain are supposed to be talking to each other or working together, this traffic—the communication between different regions of the brain—takes unexpected exits and detours for no apparent reason. 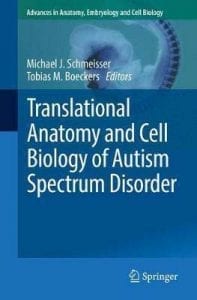 A team of San Diego State University researchers, studying MRI scans of school-age children’s brains, found just such unique patterns of neural communication involving the amygdala, the area of the brain responsible for processing social information. In children with ASDs, the amygdala connections with other parts of the brain proved to be weaker with some regions —and stronger with others—when compared with typically developing children of the same age.

A region of the brain showing marked differences connecting with the amygdala was the occipital cortex, located in the rear of the brain. It is involved in encoding facial expressions, gaze and other facial cues, said SDSU psychologist Inna Fishman, who led research.

The findings point to possible brain “markers” for autism spectrum disorders to further characterize the condition in biological and not just behavioral terms. Fishman said such markers could potentially become a tool in identifying autism in children with this developmental disorder, which can impair social communication and interaction.

“The patterns of amygdala connections are very unique in autism,” said Fishman. “What we found is not necessarily something I would predict. We measured connections of the amygdala with the entire brain, and the findings with the visual cortex kind of surprised me.”