Trauma-Sensitive Schools and Communities: Hearing the Music Through the Static

Trauma-Sensitive Schools and Communities: Hearing the Music Through the Static 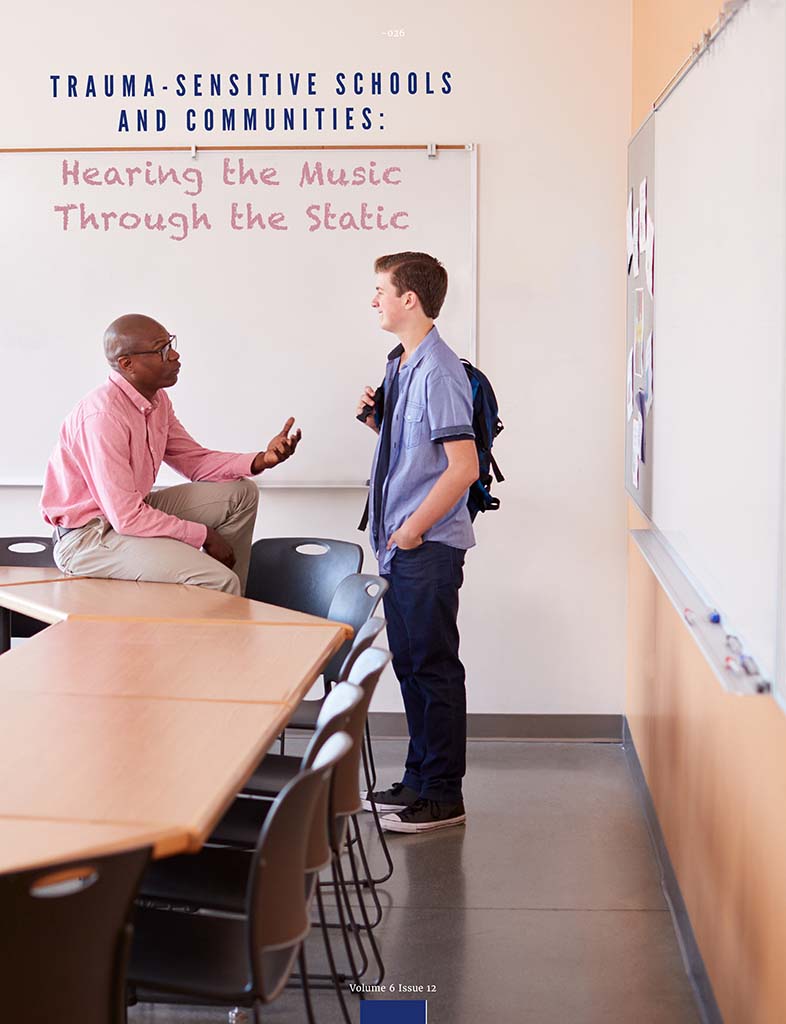 Our time with GAINS has been personally and professionally inspiring. Through GAINS, we have had a front seat to watch the field of interpersonal neurobiology (IPNB) deepen and expand. Between us, we have spent 72 years in education, and during the past two decades we have been learning, teaching, and applying IPNB in educational settings—Greg in higher education and community settings and Kirke mostly with learning-challenged students in K-12 public and private schools. Anecdotal observations in our varied settings have been supported and expanded by research findings from IPNB and studies on adverse childhood experiences, human attachment, and education.

There is currently a great convergence of the research in these areas that is leading to the development of trauma-sensitive schools. For example, the Adverse Childhood Experiences (ACE) Study (Felitti et al., 1998) and its many associated studies have expanded our anecdotal observations beyond anything we expected. Briefly, in the initial study, approximately 13,500 mostly middle-class white adults were sent questionnaires and asked to report if they had experienced any of a list of ten adverse childhood experiences, for example: “Did a parent or other adult in the household often push, grab, slap, or throw something at you?” or “Did you often feel that you didn’t have enough to eat, had to wear dirty clothes, and had no one to protect you?” The study discovered a dose-related response, meaning the more ACEs people reported in their childhood, the more they were likely to experience negative effects in later life. This alone may not be surprising, but what particularly surprised us were the pervasive lifelong negative effects of ACEs on people’s health as adults, ranging from poor academic performance to ischemic heart disease, liver disease, depression, alcoholism, chronic obstructive pulmonary disease, suicide attempts, unintended pregnancies, and many more (Centers for Disease Control and Prevention, 2016).

The first ACE study found that about 63% of the respondents had one or more ACEs; 15.2% of women and 9.2% of men had four or more ACEs, which made them the most vulnerable to negative health effects later in life. It’s important to note that the ACE score is by category, not event, so an individual could report only one ACE but have innumerable experiences of that particular type of adverse experience. Later studies have shown cumulative negative effects of repeated traumas of the same type.

Kirke’s work in K-12 education naturally led him to research on his current students, and he was struck by the prevalence of their on-going trauma. For example, the most recent National Survey of Children’s Exposure to Violence states:

Note that these rates are for just one year. Summed over several years, the statistics indicate that by 16 years of age, around two-thirds of children in the US have experienced a traumatic event (Copeland, Keeler, Angold, & Costello, 2007).

Both of us realize that these numbers are stark, yet we are feeling hopeful because educators are beginning to create trauma-sensitive schools to improve learning for traumatized children. It is critical to remember that teachers have had their own ACEs and these statistics may also apply to them personally; that is to say, many of the people developing trauma-sensitive schools have experienced their own adverse childhood experiences. (Kirke had the staff at his school complete the ACE survey and found that about 30% had 4 or more ACEs.)

Before showing how IPNB informs trauma-sensitive schools, we need some definitions. First trauma. A traumatic event seems deceptively simple to describe—the school shootings in Columbine and Parkland, for example, or the battlefields in Afghanistan and Viet Nam, or the tsunamis in Thailand and Japan—but the description of an event does not account for its impact on individuals. For an individual’s perspective, consider the definition of trauma given by Robert Macy, president of the International Trauma Center, as  “an overwhelming demand placed upon the physiological human system” (cited by Deb Dana, 2018, p. 17). More simply, trauma is exposure to experiences that exceeds one’s ability to cope (Craig, 2017). The second definition is of trauma-sensitive schools, which are designed to be safe zones that protect or buffer students from external forces that threaten their potential, and at the same time foster the skills they need to regulate emotions (Craig, 2017).
[Content protected for subscribers only]

This has been an excerpt from The Neuropsychotherapist Volume 6 Issue 12 – for this complete article and more like it, please subscribe.