Training in Musical Improvisation May Teach Your Brain to Think Differently 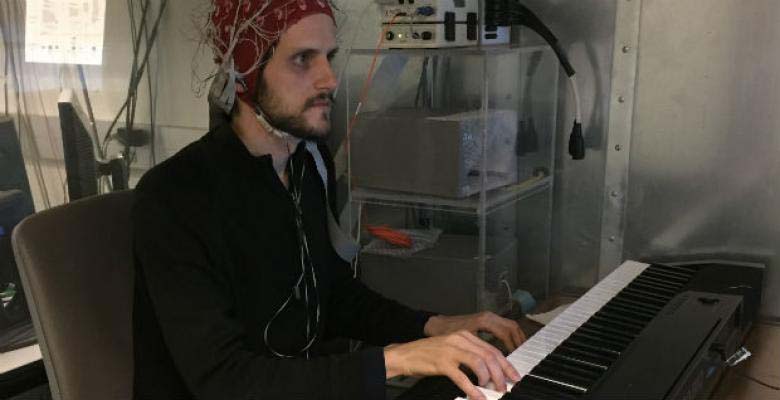 Skilled improvisers were better than musicians with limited improvisational experience at distinguishing between chords that can be used interchangeably in a piece of music and those that cannot, says a new study led by Andrew Goldman, a postdoctoral researcher at Columbia University (pictured).

John Coltrane and Jerry Garcia became improvising legends for their ability to mix musical elements on the fly. How the brain accomplishes such feats of creativity under pressure remains a mystery, though practice is increasingly thought to play a pivotal role.

Now, in a new study in the journal Psychology of Music, Columbia University researchers show that skilled improvisers are better than musicians with limited improvisational experience at distinguishing between chords that can be used interchangeably in a piece of music and chords that cannot. Further, when the improvisers recognized a chord unsuitable for substitution, their brains showed a pattern of electrical activity distinct from non-improvising musicians.

“It turns out that the degree to which we can predict how musicians respond to different types of musical substitution has nothing to do with how much they practice, but the way they practice,” said the study’s senior author, Paul Sajda, a biomedical engineer at Columbia Engineering and a member of Columbia’s Data Science Institute. “Improvisational practice seems to reinforce how the brain represents different types of musical structures.”

“This work shows that far from being ineffable or mysterious, the practice of improvisation can be studied scientifically, yielding new knowledge about the brain and how we all get along in the world.”

The researchers asked 40 musicians to listen to a series of chord progressions randomly interspersed with two types of chord variations: one from the same functional class (say, a similar chord with its notes inverted), and one from outside the class (say, a major chord juxtaposed against a minor chord). The improvisers, most of them trained in jazz, identified the oddball chords unsuitable for substitution faster and more accurately than the mostly classically-trained musicians with limited improvisational practice. How well they performed, the study found, was largely predicted by their level of improvisation experience.

Improvisation is hardly confined to music—it underlies much of daily life. Faced with a delayed train, you might decide to walk or take the bus; a missing ingredient, the closest alternative. With a flexible mindset, a creative solution is often at hand. With music, as with cooking, the trick is knowing the rules of substitution, says the study’s lead author, Andrew Goldman, a postdoctoral researcher at Columbia.

He explains: Having run out of lemons, an improvising chef will reach for a lime knowing that citrus fruit will work better in the recipe than, say, a banana, much as an improvising musician knows that a chord with a similar harmonic function will work better than one with a different function. In Goldman’s experiments, the improvisers were quick to differentiate between the musical equivalent of easy-to-substitute limes and hard-to-substitute bananas.

In a 2015 study of varsity baseball players, Sajda, the biomedical engineer, found that experts categorized pitches in much the same way. The experts were better than non-ball players at making split-second calls distinguishing a fast ball from say, a curve ball, and deciding whether to swing. This insight became the basis for deCervo, a tech startup founded by two former students of Sajda’s who are now using brain-training exercises to improve batting performance.

In a related study with Barnard College dance professor Colleen Thomas, Goldman compared how people with varying levels of training in dance, improvisational dance, and Contact Improvisation—a form of improvised dance with partners—responded as they watched Thomas perform everyday actions and dance moves. In still unpublished results, researchers found that the dancers, despite not moving themselves, showed greater activity in the brain’s motor cortex which controls movement. The effect was strongest in those with Contact Improvisation training. 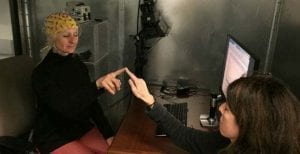 Goldman was drawn to improvisation from his earliest piano lessons as a child growing up in southern California. “I would take the music I learned, transposing, changing the mode from major to minor, or mixing other musical elements together,” he says. Later, as a composer and a concert pianist, Goldman’s interest in the brain led him to the University of Cambridge for a Ph.D. in music cognition, and then to Columbia, where he just finished a three-year fellowship in the Presidential Scholars in Society and Neuroscience program.

When Goldman this spring put on Science! the Musical, a playful commentary about academic life that he wrote and performed in on piano, he was delighted when the lead singer embellished one song, “The Real World,” with extra notes for emotional emphasis.  “She had never done that in rehearsal, he says. “It worked very well.”

This summer, Goldman heads to Western University in Ontario to continue studying the neuroscience of improvisation, a field that has expanded rapidly in recent years. Rather than focus on defining the subjective nature of improvisation, Goldman wants to go after questions with measurable answers. For example, how do different types of training influence musical perception? How do improvisers organize their knowledge of musical structures differently from non-improvisers?

George Lewis, a professor of composition and musicology at Columbia who co-edited the Oxford Handbook of Critical Improvisation Studies, says Goldman is off to a promising start.

“This work shows that far from being ineffable or mysterious, the practice of improvisation can be studied scientifically, yielding new knowledge about the brain and how we all get along in the world,” said Lewis, who was not involved in the study. “This is important all by itself, and relevant to other work in cognitive psychology, neuroscience, and beyond.”

What an interesting study! While being a musician myself, it’s no so much the findings about the cognitive flexibility of the improvisor that I find fascinating, but the wider application to be cognitively flexible improvisors in everyday life, or in our professions.