The Yoga of Creative Consciousness and Cognition in Neuropsychotherapy

The Yoga of Creative Consciousness and  Cognition in Neuropsychotherapy 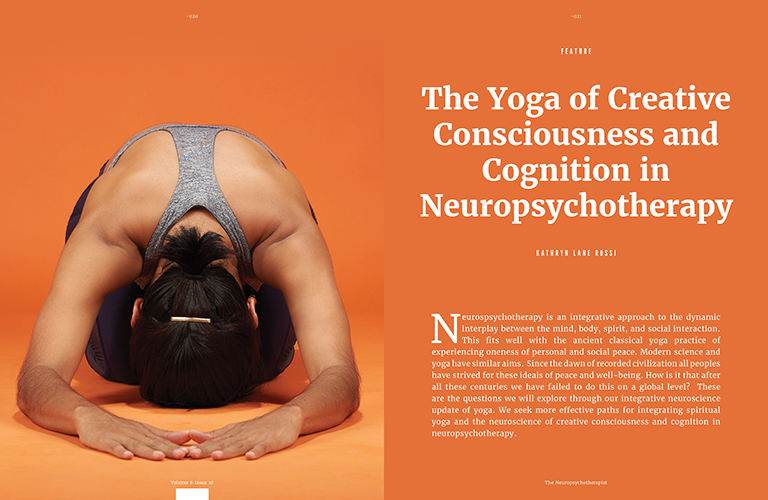 Neuropsychotherapy is an integrative approach to the dynamic interplay between the mind, body, spirit, and social interaction. This fits well with the ancient classical yoga practice of experiencing oneness of personal and social peace. Modern science and yoga have similar aims. Since the dawn of recorded civilization all peoples have strived for these ideals of peace and well-being. How is it that after all these centuries we have failed to do this on a global level? This is the question we will explore through our integrative neuroscience update of yoga. We seek more effective paths for integrating spiritual yoga and the neuroscience of creative consciousness and cognition in neuropsychotherapy.

Neuroscience and Yoga in Neuropsychotherapy

It is the nature of human experience to want to create a cohesive story, a personal narrative for new and more highly adaptive consciousness. A natural course is to integrate ancient, well-established, spiritual practices of consciousness with the developmental views of modern science (White, 1995). In Table 1, we integrate the science, theory, and practice of facilitating the growth of new consciousness and therapeutic cognition in neuropsychotherapy.

Yoga teaches peace for the mind, body and soul. As a reminder, the Om Shanti mantra is often chanted at the end of a practice. It is important to note that the root of the Sanskrit word for peace is sham (śam: be calm) meaning peace, rest, calmness, tranquility, or bliss. Oṃ. śānti, śānti, śāntiḥ is peace for me and the unknown and unseen (aahidairvika), peace for you: the earth and humanity (aadhibhautika), and peace for all: problem-solving (aadhyaamika). We will review the neuroscience that documents how novelty–numinosum–neurogenesis Effect (NNNE) can optimize the growth of neurons and brain plasticity to enjoy life to the fullest when we are peaceful.

We can only imagine and point to the ancient spiritual roots of creative consciousness and therapeutic cognitions.

—Julian Jaynes,
The Origin of Consciousness in the Breakdown of the Bicameral Mind, 1976

In the beginning spiritual practice offered a path for taking “careful regard” of what you are doing (Jung, 1933). Even before the organization of formal religion, sacred rituals of celebrations of life with fire were performed initially to activate awareness and living beyond the perceived limitations of the ordinary physical world. Priests invented stories about God, which then became the central forces and rationale for civilization. Siddhartha Gautama, for example, who became Buddha, was born in luxury between 600 and 400 BCE. He left his comfortable life of luxury and sought to understand why there is suffering. He spent 49 days in deep contemplation sitting under the Bodhi tree and developed a personal practice by honoring God’s Four Noble Truths. How could Buddha teach this to the public? Buddha recognized these truths as guides for optimizing life. He lived along the Silk Road route in the age of great trade between Europe, the Middle East, and Asia. Philosophers and spiritual leaders also traveled the Silk Road to exchange rich knowledge and beliefs with their deeply spiritual colleagues to understand and integrate the best practices and ideologies into their budding religions. Significantly, Buddha’s first public lecture was in Sarnath, India, a few miles from Varanasi, the most spiritual city in India, at the confluence of the sacred Ganges and Varuna Rivers. Clearly, Buddha was influenced by India’s Vedic teachings, specially the Upanishads (Krishna, 2018), the predecessors of Pataňjali’s Eight Limbs of Yoga. Buddha’s personal spiritual discovery story became a bestseller in Hermann Hesse’s Siddhartha (1922/1971). Joseph Campbell came along and studied all the myths of humankind and then synthesized a summary monomyth of six stages of everyone in The Hero’s Journey (1949/1991). Ernest Rossi then reduced these six stages of the hero’s journey to four salient stages of the creative cycle to explain the data of modern neuroscience in psychosocial genomic terms (Rossi, 1968, 2004, 2007, 2012). Even today these deep DNA insights continue developing, with each generation finding its own vocabulary and new scientific stories (Doudna & Sternberg, 2018). Recently we have seen mindfulness, as a psychological theory with spiritual roots in ancient yoga, recommending certain practices of meditation with modern roots in neuroscience. Do neuropsychotherapists have something to add to this eternal dialogue? If so, what is it?

Thirty scientists got together in 1969 to form a Committee of Brain Science to satisfy the emerging need to broaden and advance studies of the brain and nervous system. These original biologists on the committee felt that something was missing in psychology. We need to study how neurons work along with the biochemistry of our nervous systems. They broke out of the limitations and restrictions of the status quo research of the early psychological community in the 1890s (Boring, 1950). Several years later the Society for Neuroscience (https://www.sfn.org/) was founded in the 1970s. No one today doubts that neuroscience is really a magnificent umbrella science. Neuroscience integrated biology with neuropsychology in the study of the structure and function of the brain. Psychosocial genomics, how the psychology interacts with our genes, now is being developed. This opened the door to bringing behavioral psychology into the limelight and ushered modern-day mindfulness into neuroscience.

Ernest Rossi began his academic education with a full four-year scholarship in Pharmacy, which eventually led to a two-year Predoctoral United States Public Health Fellowship (USPH) to become a psychologist. He then received a two-year USPH postdoctoral grant with Franz Alexander, a global expert in psychosomatic medicine. Ernest was at the time deeply moved by Joseph Campbell (1949/1981), who told the story of how religion emerged from the mists of myths in ancient times. Ernest condensed Campbell’s 6-stage monomyth of humankind into Rossi’s 4-stage creative cycle in a 1968 paper entitled, “The Breakout Heuristic” (Rossi, 1968, 2007). Ernest began his professional career by hypothesizing how the 4-stage creative cycle integrates consciousness studies: spiritual, psychological, and neurological. Ultimately, the 4-stage creative cycle is based in chronobiology, the science of time and mind (Lloyd & Rossi, 1992, 2008). He hypothesized that the 4-stage creative cycle of consciousness could be mapped into understanding our natural peaks and valleys of the ultradian 90–120-minute basic rest–activity cycle (BRAC) of biology. This integration of psychology and biology helps us harness nature’s gifts as well as in problem -solving and new cognitions. Richard Hill aptly describes this in the Practioner’s Guide to Mirroring Hands (Hill & Rossi, 2017, p. 80):

The ultradian rhythm is an emergent property of biological and mental integration. The 4-stage creative cycle is a fundamental organizing principle. Creativity is, at its heart, the process of utilizing what is available in this moment to make something new. Creativity involves a sense of personal engagement and self-relevance: the ability to perceive the world in new ways, to find patterns, and make connections between seemingly unrelated phenomena. The 4-stage creative cycle is a universal activity that is evident in just about everything from the activation of gene expression to the emergence of the universe via the growth of new neurons and brain plasticity. In the human experience this is how the four stages play out.

Stage 1: Curiosity/Information/Preparation. The experience of gathering information and data: What is this all about?

Stage 2: Incubation. Working out what the problem is really all about: How does this affect me? What does this mean to me?

Stage 3: Breakthrough and illumination. A flash of insight, resolution, or revelation (an Aha! or Eureka moment) followed by an extensive and creative response to change: Things makes sense now, and I can create something better in my life!

Stage 4: Verification. The whole experience is quietly reviewed, and its benefits integrated into everyday life: I understand, appreciate, and accept what I have learned.

This has been an excerpt from The Neuropsychotherapist Volume 6 Issue 10. For more great science of psychotherapy please consider becoming a member.