The Yoga of Creative Consciousness and Cognition in Neuropsychotherapy (Part 2)

The Yoga of Creative Consciousness and
Cognition in Neuropsychotherapy 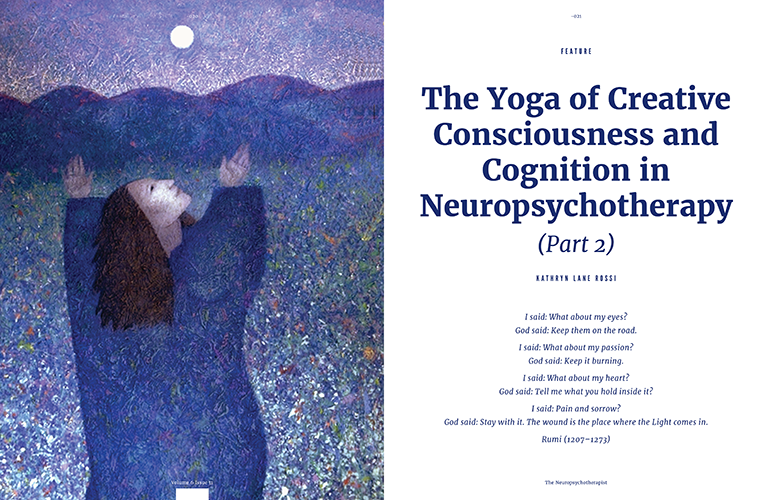 I said: What about my eyes?
God said: Keep them on the road.

I said: What about my passion?
God said: Keep it burning.

I said: What about my heart?
God said: Tell me what you hold inside it?

I said: Pain and sorrow?
God said: Stay with it. The wound is the place where the Light comes in.

Most psychotherapists focus on the mind—What do you think? How do you feel? Yoga Story Therapy (YST) integrates the entire body into a creative psychodrama exploring archetypal myths of everyday life and psychology in word and deed. The richness of YST can facilitate optimal consciousness and cognition with neuropsychotherapy. People can enhance their best self by asking questions, engaging sensitive mind–body (chakra) scans, tuning in to their breath, and practicing meaningful movement through Yoga Story Therapy and the mirroring hands approach of Hill and Rossi (2017).

Part 1 of this series reviewed neuroscience theory and research for integrating mind, body, spirit and society through the classical ancient practice of Patañjali’s 8 Limbs of Yoga with Buddha’s 4 Noble Truths, the basic rest–activity cycle (BRAC), and the 4-stage creative cycle to provide a path for creating new consciousness. Myths, legends and personal stories are illustrated for inspirations to recreate our better and new selves. Readers were encouraged to explore questions about their own autobiography of personal enlightenment. We now turn to the theory and practice of Yoga Story Therapy utilizing all we learned in Part 1 of this neuropsychotherapy series.

Yoga Story Therapy began in 2008 when I went to Panama to learn how to surf and sustained a severe head trauma! A small but strong rogue wave came out of nowhere and slammed my long-board on my head. I looked around in a dazed panic for help. Dave Oliver, an award-winning teacher, came to my aid. He generously taught yoga to anyone who wanted to join his morning and evening practice. Dave was unlike anyone I’d ever met. While he could help me into and out of yoga postures safely, he was more interested in my breathing. At the end of class while in the resting pose (shavasana), he would tell ancient Hindu stories. After five days of yoga practice with Dave I felt great relief from my head trauma. I turned to him and said, “I feel like I am in the top 10% of my intelligence.” Dave replied, “That’s why people practice yoga!” I wanted to know more about “Dave’s yoga”, which was so different from therapies I’d previously practiced (Rossi, Erickson-Klein, & Rossi, 2008–2014). Surprisingly, after my injury no thoughts came into my mind unless I invited one in. My brain was very quiet and peaceful. It was a surreal experience. I became curious as to how I naturally experienced “no mind” that many people work for years in meditation to achieve. I came to an understanding that yoga is not merely physical exercise. In fact, I realized that the practice of the 8 limbs of classical yoga can have profound implications for developing spiritual consciousness and therapeutic cognition.

Trauma-informed therapy is at the forefront of today’s mind–body work. Peter Levine (2010, 2015) and Bessel van der Kolk (2014) have reviewed research detailing how traumatic memories can become frozen in unresolved cycles, causing further trauma. They both specialize on working with severely traumatized people. Levine has designed somatic experiencing, which focuses on the client’s perceived body sensations paired with memory; and van der Kolk has introduced yoga into trauma-informed therapy via research on heart-rate variability (HRV). HRV measures the relative balance between the sympathetic and the parasympathetic nervous systems. A healthy HRV has a balanced in-breath. An inhale stimulates the sympathetic nervous system, which increases heart rate. An exhalation results in the parasympathetic nervous system, decreasing heart rate:

Changing the way one breathes can improve problems with anger, depression, and anxiety. . . . Yoga can positively affect such wide-ranging medical problems as high blood pressure, elevated stress hormone secretion, asthma, and low back pain . . . but could it help with PTSD? (Van der Kolk, 2014, p. 269)

Levine and van der Kolk have surveyed the relationship between mind and body and have a new sensibility of how to bridge the C. P. Snow (1965) gap between science and the humanities. How wonderful it is that they have developed new levels of sensitivity. Can we further extend this sensitivity to develop new personal stories of consciousness and cognition? It may be helpful to return to fundamental evolutionary stories of what created humanity.

In the deep psychobiology of psychotherapy, now called neuropsychotherapy, we can trace the origins of the quantum evolution of body, mind and consciousness from the Big Bang via physics, chemistry, biology and psychology (Bucke, 1901/2010; Rossi, 2001). The primeval oscillations of quanta energy condensed into atoms. Atoms clustered into self-reflection molecules that evolved into self-sustaining dynamic structures that we call life. Life evolved consciousness and cognition from mirrors of self-reflection, creating a new story about its own nature. These stories continue to evolve through the relationship between the physical structure of our neurons and their quantum networks that we call the brain.

A visual summary of Tom Stonier’s (1990) Information and the Internal Structure of the Universe and living systems has been described by Frank Wilczek (1999) as “getting its from bits”. That is, how can “its” (physical structures) evolve out of “bits” (codes of information) from the quantum flux of the Big Bang origin of the universe? Information is the mathematical connection that brings together quantum physics, biology, psychology, consciousness, creativity, and culture. Information organizes the energy and physical dynamics of nature. Information is contained in thoughts, words, feelings, images, stories and imagination. How, therefore, do we facilitate the transduction of information from one modality to another in creative experience and healing in neuropsychotherapy?

This has been an excerpt from The Neuropsychotherapist Volume 6 Issue 11. If you would like to read the rest of this article and more great science, please subscribe.