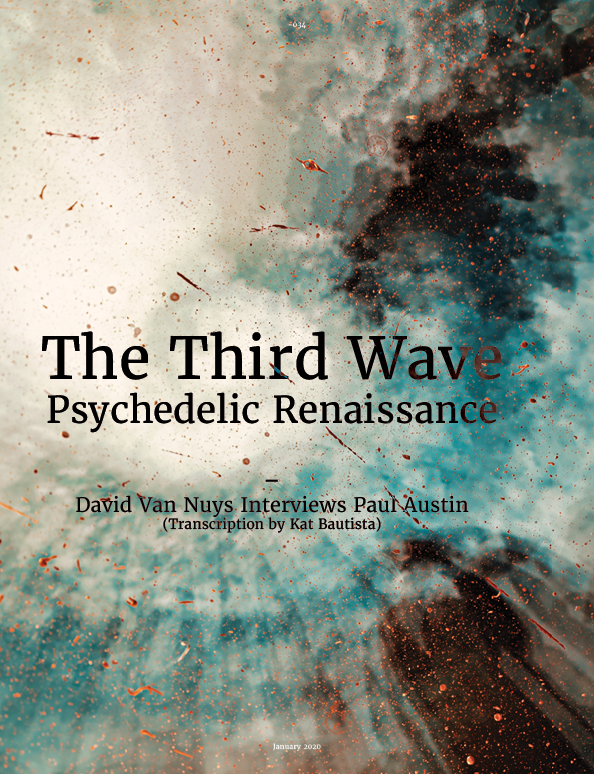 Dr. Dave: Well, I’m so glad to have you here. I’ve been doing some psychedelically oriented interviews and after a search on psychedelics, and boom, your podcast came up. I have to say that I see you as a real visionary and I’m very excited by the work that you’re doing and the way that you’re able to articulate your vision. I know that you’ve credited Jim Fadiman as being the godfather of microdosing. I’m crediting you with being the Johnny Appleseed of microdosing. So, I’ve made reference to your vision and I called you a visionary. Maybe you can break down that vision for us. But, first, can you give us a quick overview of where you grew up, what your major influences were, how you got involved with psychedelics.

Paul Austin: I’m originally from Grand Rapids Michigan, West Michigan, which is a more traditional place, so growing up, I always felt a little out of sorts, a little like “Ugh, I don’t really belong here.” Then when I was in school, aged 19 and 20, I started to work with psychedelics in a more formal capacity and came to certain insights and awarenesses that really gave me the courage to branch out of West Michigan and start to build my network elsewhere. The main insight from those early psychedelic experiences was I realized that while growing up, I’d internalized a lot of shame about who I was and what I was doing because of the community that I grew up in. With those experiences I came to recognize that the issue wasn’t so much with me, but with the system that we were living in. I ended up moving to Turkey and taught English there for a year, and then lived in Thailand where I built my first online business teaching English. I had a little bit of free time, and so I started a side project, a hobby project, called The Third Wave. This was in late 2015. It was just when microdosing was starting to gain some popularity, and by that point in time it was clear that cannabis was becoming medicalized and legalized. It was clear that from a lot of the research coming out of institutions like NYU and Johns Hopkins that psychedelics were effective at treating depression and PTSD. So, in creating The Third Wave as a resource, I wanted to start to build a cultural infrastructure for how we can actually learn scientific facts about psychedelics and how can we start to educate our culture about what are the benefits and some of the risks of psychedelics in a rational, formalized way. I built The Third Wave and since that point in time it’s just been growing in popularity. We’re in the New York Times and Rolling Stone with our message of responsible psychedelic use for intentional purposes, whether that’s creativity or healing or leadership.

Dave: You clearly have a lot of courage. You’ve been standing up, speaking out and being very open. Listening to your podcast I now know all kinds of things about you that in years past would have been secrets! But you are out there in a big way. You also refer to the culture and feeling like the culture was out of step for you. Clearly you are into redesigning culture. The other keyword that I’ve been thinking a lot about since discovering your work is intentionality. That makes it a very different enterprise than when I was coming up in the second wave. Tell us about the three waves, what the three waves are that you’re referring to, and then let’s get into your vision.

Austin: The first wave of psychedelic use was the use of psychedelics by indigenous groups. They have been doing this for thousands of years. The beverage kykeon, was used in Ancient Greece in something called the Eleusinian mysteries, which Plato and Aristotle were a part of. Then you had ayahuasca in the Amazon. You had soma in Ancient India, which was written about in the Bhagavad Gita and the Upanishads. There are various other indigenous societies and groups around the world who have been using these plant medicines for thousands of years to access visionary states. Unfortunately, though, around the time where Christianity became more the mainstream perspective in Western thought, a lot of those visionary plants were put away. It wasn’t until the fifties and sixties when – this is the second wave now – when Gordon Wasson, who was the vice president of JP Morgan and amateur mycologist went down to Oaxaca and discovered the magic mushroom, which he wrote about in Life Magazine. It was the front page in 1957. That’s when these visionary substances, psychedelics, started to re-enter and re-emerge in Western consciousness. That led to Timothy Leary and Richard Alpert. The crescendo came during the sixties where LSD was legal and a lot of people were consuming it, but it got a little out of control. There wasn’t the infrastructure in place to support a lot of the awakening that was happening culturally, so the administration at the time tied psychedelic use to the anti-war movement and shut down all the research that was going on. They shut down the research and made all of the substances illegal and inaccessible. There have always been a place for these substances within Western culture, but when everything was shut down, and psychedelics were prohibited, this was a new time period where we couldn’t explore these states in a responsible way. The third wave is when Bob Jesse reached out to a researcher at Johns Hopkins named Roland Griffiths in 1999. They connected him to Bill Richards, who was one of the early researchers in the sixties with psilocybin, and in 2006 they published a landmark paper about the role of psilocybin in occasioning mystical types of experiences. For me, this marks the beginning of the third wave, when that first research paper was published. Since then, there’s been a continuous growth of interest in psychedelics, particularly for medical purposes. Outside of that we’ve also seen the medicalization and legalization of cannabis, so these substances that were previously deemed illicit, with no medical value by institutions like the US government, were now coming into our consciousness as legitimate. This appears to be going, and this is more or less the vision, as are other modalities that are becoming mainstream like yoga and mindfulness meditation, to become more mainstream. Psychedelics are a part of that. We’re really looking at how we can help people re-contextualize or reevaluate psychedelics not as drugs, but as tools that, if used in a responsible way, can help to facilitate creativity, help facilitate healing, presence, and awareness. Micro-dosing, in particular, is so interesting because it’s acting as that touch point, that initial way that people can start to engage with psychedelic substances that is not really all that threatening, that isn’t all that scary and so they can start to experience and understand some of the benefits that are tied to these substances.

I am interested In learning if there are studies or availability to acquire Or participate in studies of micro doses of LSD I live in Ecuador
Thank you,
Kathleen