The Psychotherapist’s Essential Guide To The Brain – Memory 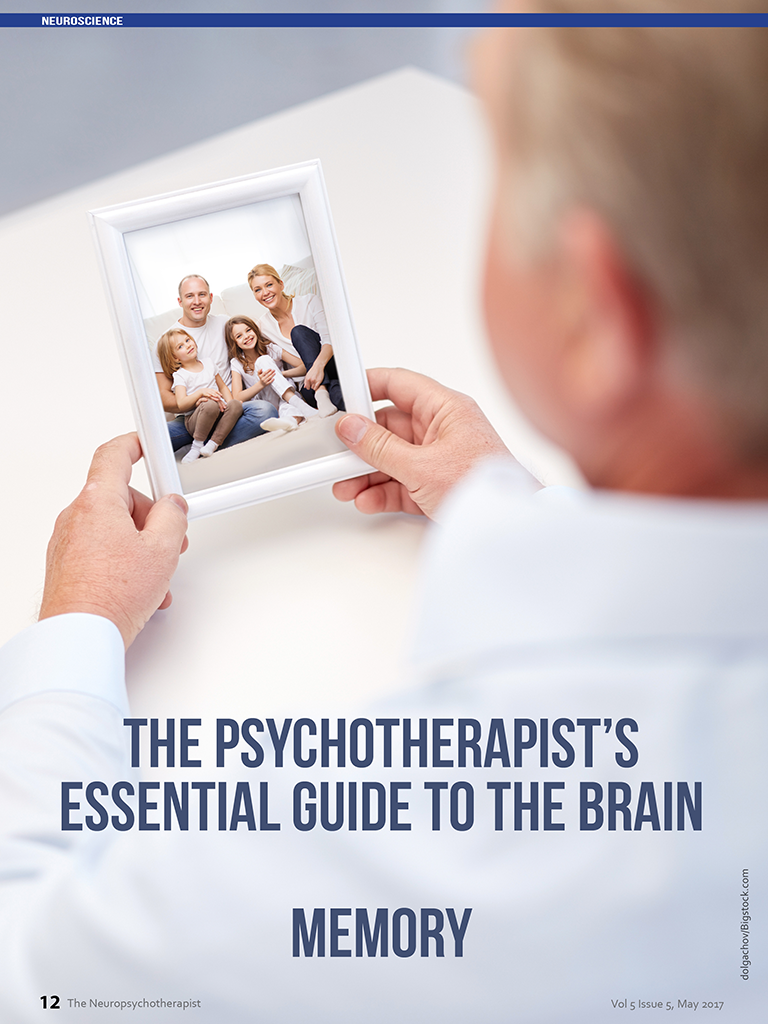 All through our lives we are on an insatiable learning quest that we call memory. We continually store information, either consciously or unconsciously, and draw on that learning to be animated and have a sense of who we are and what the world is. It is a never-ending cycle of encoding, storage, and retrieval (Baddeley, Eysenck, & Anderson, 2009). When you think about it, this process of encoding and storing experience as memory is everything to us. We are born into the world ready to learn, ready to memorize, and in fact have already started the learning quest in the womb (Partanen et al., 2013). Without memory you cannot talk, walk, or move in any meaningful way; you would know no past; you would have no concept of self or place—no concept of who you are, where you are, or what surrounds you. From the unconscious reflexes and motor control that allow you to walk with little conscious effort to the complexities of advanced cognition such as solving equations in theoretical physics, memory is the indispensable operant. Memory links our past with our present and allows us to project into the future—it absolutely influences our next move. Our lives, and the memories our lives are built on, are uniquely crafted by the complex interplay of our individual neural architecture and genetic expression immersed in the experience of our environment.

The epigenetic process—where our experience of the environment alters the way in which genes are expressed—is another fascinating aspect of memory. But it is a complex subject, and too large for our brief study of memory here. (For a study on epigenetics for therapists, see Peckham, 2013.) For now, our focus here are the networks and molecules involved in memory encoding, storage, and retrieval.

Ever since Paul Broca, in 1861, discovered that damage to a particular part of the left frontal lobe (now known as Broca’s area) produced deficits in language, there has been a quest to discover the discrete parts of the brain that mediate specific cognitive functions, including in this quest the prevailing question: “Are there discrete brain systems devoted to memory?” Certainly, in the last few decades, there has been significant progress in our understanding of learning and memory. Eric Kandel, who received the Nobel Prize for his research on memory, and whose outstanding career and discoveries are documented in his book In Search of Memory: The Emergence of a New Science of Mind (Kandel, 2006), is perhaps the foremost of the many researchers who have given us a much more sophisticated understanding of memory processes. Kandel’s work, famously with the elegant sea slug Aplysia californica, has uncovered some of the secrets of learning and memory, most notably the mechanisms of memory consolidation and neural plasticity. Kandel identified two problems: the systems problem of memory (“Where in the brain is memory stored?”) and the molecular problem of memory (“What are the mechanisms of this storage?”).

When addressing the systems problem we can divide memory into two broad categories:

Short-term memory—momentary memory that is processed in the temporal lobe and hippocampus before being transferred into long-term memory or discarded. This transient memory can also be manipulated by the prefrontal cortex—a process known as working memory (a distinction can be made between short-term and working memory, see Aben, Stapert, & Blokland, 2012)—before it is either lost or integrated into long-term memory. Short-term memory can be thought of as a transient representation of goal-relevant knowledge (Kandel, Schwartz, Jessell, Siegelbaum, & Hudspeth, 2013), an important part of our consciousness. We can further divide short-term memory into verbal and visuospatial information that is coordinated by executive control processes that allocate attentional resources to the different memory systems.
Long-term memory—memory that can persist for years and is encoded in the cerebral cortex. Long-term memory is further divided into:

Explicit (declarative) memory—the memory of facts and events, and people, objects, and places, processed in the medial temporal lobe and hippocampus. This sort of memory requires conscious effort to recall. For example, the legendary spatial memory held in the hippocampus of London taxi drivers actually enlarges their hippocampus, full of London street information, ready for conscious recall. Explicit memory is mediated by the processes of encoding, storage, consolidation, and retrieval, and the elements of this form of memory are distributed among many brain regions that can be accessed independently (Kandel et al., 2013).

Implicit (procedural) memory—the memory of skills and habits, the non-associative and associative learning of the neocortex, striatum, amygdala, cerebellum, and reflex pathways that do not require conscious attention to recall. These are the memories that encode the automatic part of our behavior—walking and talking, and all the special skills we have learnt. Implicit memory can be further categorized as:

What then are the mechanisms that allow the storage of memory to occur? Kandel and others have discovered that repetition is one mechanism whereby the information being received is converted from short- to long-term memory through altered gene expression and the growth of new synaptic connections. These changes, which we call experience-dependent neuroplasticity, require protein synthesis to create more permanent synaptic connections between neurons. When there is repeated activation of a neuron, the second messenger system within the cell causes changes in the cell nucleus, where the genes are located, and this works in distinct ways for explicit and implicit memories.

It is also important to note, especially so for the psychotherapist, that one-trial learning (a single exposure to a stimulus) can happen when there is strong emotion involved—as in a traumatic event, for example. As anyone who has been traumatized by a single transient event (such as being held up at gunpoint) can attest, that one event can form a remarkably stable and enduring memory. There may, however, be cognitive processes going on after the event that persist to consolidate the memory of such a trauma.

To take an example, let us look at long-term implicit memory formation (consolidation) that involves changes in chromatin structure and gene expression. The following is a somewhat simplified version, with many details and regulatory factors omitted. (Those wishing to know all the detailed interactions are encouraged to read Chapter 66 of Kandel et al., 2013.) When there is repeated activation of a set of neurons (e.g., practicing scales on the piano), there is a prolonged rise in cAMP (see Glossary) due to repeated application of serotonin. This, in turn, activates protein kinase (PKA) that does two things: first, it translocates into the cell nucleus to turn on CREB-1 to activate gene transcription while activating mitogen-activated protein kinase (MAPK), which turns off the inhibitory gene repressor CREB-2. Then, once activated, CREB-1 influences downstream genes and stimulates the growth of new synaptic connections. These new connections consolidate a memory that is lasting.

In the case of explicit (declarative) memory, repeated stimulation of neuronal circuits establishes a consolidated memory. Like implicit memory, it uses modulatory transmitters and CREB-mediated switches to initiate downstream gene expression to grow new synaptic connections. But, unlike implicit memory, NMDA receptors and the dopaminergic system to activate a cAMP/PKA pathway within the neuron and the cascade of events that result in a more stable connection. (Once again, for the full details of explicit memory consolidation, readers are encouraged to read Chapter 67 of Kandel et al., 2013).

Students have been known to take amphetamines or other dopamine-enhancing drugs when cramming for exams to heighten explicit consolidation by supercharging the front end of that process. It is also conceivable that drugs that short-circuit the cAmp–PKA–CREB pathways may limit the consolidation of traumatic memories if administered in a timely manner. Conversely, like the student using dopamine to enhance memory, there may be negative consequences when taking drugs to enhance the dopaminergic (explicit memory) or serotonergic (implicit memory) systems in the face of trauma. For example, a study investigating the link between chronic stress and PTSD found that stress enables a serotonergic memory consolidation process that was not present in unstressed animal subjects (Baratta et al., 2016). The results of this study showed that chronic stress causes proliferation of 5-HT2C receptors in the amygdala that bind to serotonin, thereby creating a heightened sensitivity to serotonin and stronger memory consolidation. This finding suggests that antidepressants such as  Prozac and other selective serotonin reuptake inhibitors (SSRIs), when given to recently traumatized individuals, may actually promote stronger traumatic memories (Trafton, 2015).

In ageing and loss of memory there may be a compromise in the cAMP process. Kandel suggests there are two ways to boost memory—either increase the dopaminergic input in the case of explicit memory systems, or slow down the degradation of cAMP by introducing a drug (e.g., Rolipram) that inhibits phosphodiesterase, which would normally break down cAMP (Kandel, 2013). For example, Alzheimer’s disease activates inhibitory constraints on the cAMP cycle, and in experiments with mice it has been found that Rolipram restores learning. In the case of Alzheimer’s, however, other strategies available that aim to reduce the toxicity of beta-amyloid to nerve cells (beta-amyloid is a main component of toxic plaques that are believed to play a central role in the development of Alzheimer’s disease pathology), rather than boosting the cAMP system (Kandel, 2013).

This has been an excerpt from The Neuropsychotherapist's Essential Guide to the Brain Part 16. To download the full article, and more excellent material for the psychotherapist, please subscribe to our monthly magazine.