The power of picturing thoughts

Harvard scientists are beginning to provide answers to one of the thorniest questions in psychology: How do we think?

Human thought generally can be divided into two modes, the visual and the verbal. When you think about your next vacation and imagine sitting under a palm tree and sipping a cold drink, you’re probably thinking visually. If you’re thinking what you’ll say when you make a presentation at work, you’re likely thinking in words and sentences, creating inner speech. 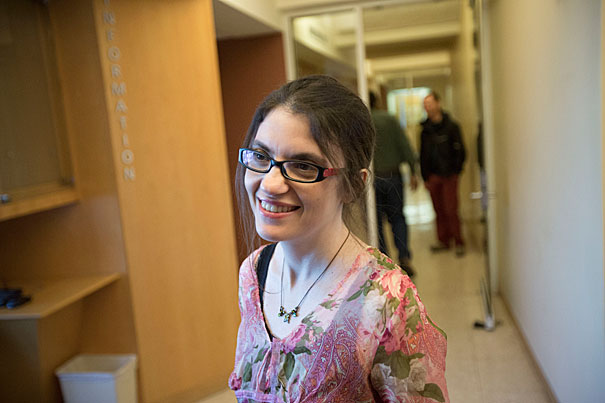 Elinor Amit, College Fellow in Psychology is the senior author of a recent paper that finds that people prefer to communicate prefer to communicate verbally (versus visually) with people who are far (versus close) either socially, geographically or temporally. Amit is seen at William James Hall at Harvard University where she works. Kris Snibbe/Harvard Staff Photographer

But are the two always separate? Can you utilize one without the other popping up? A new Harvard study suggests that the answer depends on which mode of thinking you’re talking about.

Led by Elinor Amit, an affiliate of the Psychology Department, and Evelina Fedorenko of Harvard Medical School, the study found that even when they were prompted to use verbal thinking, people created visual images to accompany their inner speech, suggesting that visual thinking is deeply ingrained in the brain. The study is described in a paper recently published in the journal NeuroImage.

“The question we wanted to answer was: Can you engage in one without the other modality popping up?” Amit said. “Can you use one without invoking the other unintentionally?”

To understand better how humans use each mode of thought, Amit and colleagues designed a series of experiments that began in the lab and later moved to MRI scanners.

In the first experiment, volunteers were asked to create either images or sentences based on pairs of words. The first was always an occupation, such as ballerina, policeman, or teacher. In half of the trials the second word was an object, while in the other half it was a place.

The experiment was run twice, once using volunteers in the lab, and once using online volunteers recruited through the internet labor market Amazon Mechanical Turk. In both cases, Amit said, the results were the same.

“What we found was there was no difference in the vividness of images,” Amit said. “The subjects didn’t care if we asked them to create an image or not; it was vivid regardless of what we asked them to do.” However, the clarity of the sentence was affected by instructions. The inner speech produced by the subjects was clearer when the participants intended to create sentences than when they did not.

While those results were significant, they still relied on participants’ self-reporting on the vividness of images or inner speech. To overcome this limitation, Amit and colleagues turned to functional magnetic resonance imaging, or fMRI, to track subjects’ brain activity.

For the fMRI test, researchers first trained participants using a series of both engaging sentences and images, each of which could be recalled using a “cue.” As they recalled the sentences or images, Amit and colleagues used fMRI to monitor the brain’s language network, as well as brain regions known to be involved in recognizing faces and bodies.

“We found that people generated more robust verbal representations during deliberate inner speech … but they generated visual images regardless of whether their intent was to visualize something or to think verbally.”

Interestingly, Amit said, the fMRI tests also revealed that even when participants consciously tried to think visually, their brains showed relatively low levels of activity in the visual region, leading to questions about exactly what it is that people are visualizing.

“This raises an interesting question,” Amit said. “It suggests that even though we visualize things all the time, it may be that they are relatively impoverished and not like a movie that runs in our heads.”

Going forward, Amit said, the study poses intriguing questions about whether humans must be tied to the here and now.

In earlier research, Amit and colleagues found that people tend to think visually about things that are close to them (temporally, socially, or geographically), but use inner speech when contemplating far-off things.

“So if you think about Harvard Square versus San Francisco, you’re probably visualizing the former, but thinking verbally about the latter,” Amit said. “The same goes for whether you think about yourself or someone else, or in-group versus outgroup, or tomorrow versus 10 years from now.”

Her new study, however, finds that even when people consciously attempt to think verbally, visual thinking nearly always intrudes, suggesting that people are grounded in the present even when they try to use a mode of thinking typically reserved for the future.

“This suggests that we can’t really go beyond the here and now and think in abstract ways about other people, places, or times,” Amit said. “This is the way our brains are wired, and there may be an evolutionary reason for this [because] we haven’t always been verbalizers. For a long time, we understood our world visually, so maybe language is an add-on.

“That has important implications because if we are truly grounded in the here and now, what does that mean about how we develop public policy?” she added. “Do we need to help people overcome their bias to focusing on the here and now? This is something we may need to be aware of.”