The New Science of Consciousness

The New Science of Consciousness: Exploring the Complexity of Brain, Mind, and Self 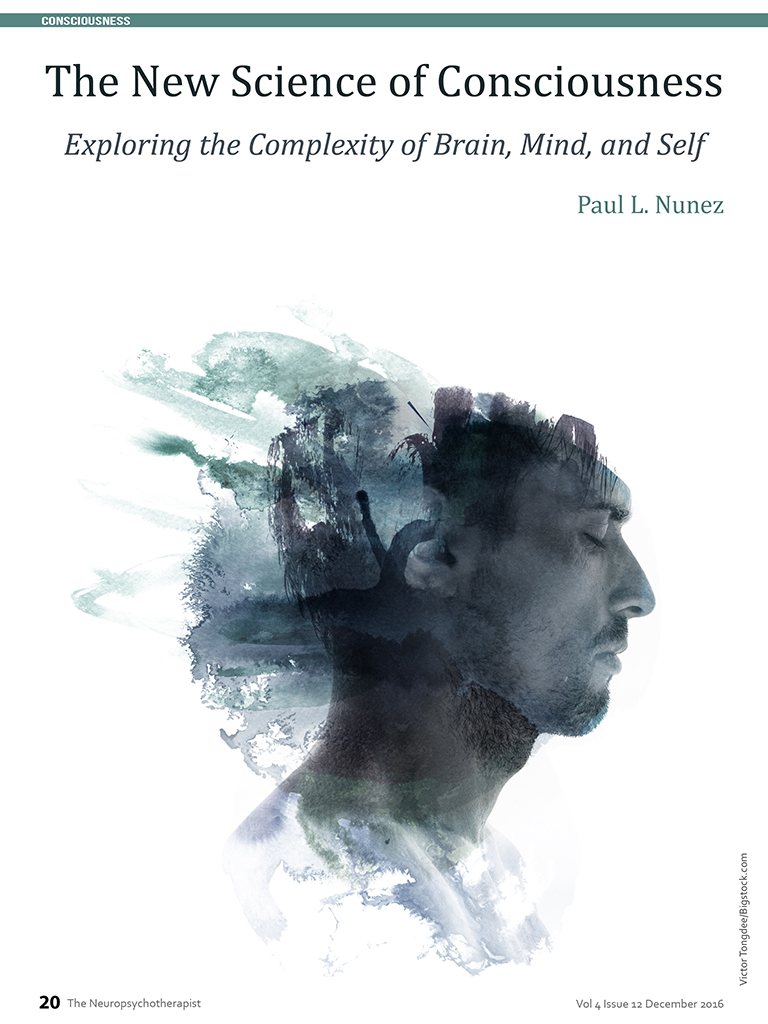 The New Science of Consciousness offers a novel approach to brain science based on collaborations between neuroscientists and complexity scientists. The new partnerships involve subfields of neuroscience, physics, psychology, psychiatry, philosophy, and more. This cross-disciplinary approach reveals fresh insights into the major unsolved challenge of our age: the origins of awareness, especially our self-awareness.

Introduction
Like most neuroscientists, my professional life has been focused on the “easy problem” of consciousness—exploring experimental relationships between brain and mind activity, the consciousness correlates or signatures of consciousness revealed with measures like electroencephalography (EEG) and functional magnetic resonance imaging (fMRI). But, my early career move from theoretical physics to neuroscience was motivated by a long-running fascination with the deep mystery of consciousness, the infamous “hard problem.” This essay provides a brief outline of ideas presented in more detail in The New Science of Consciousness (Nunez, 2016), which is based largely on the following conceptual framework:

The word “self” in this book’s subtitle suggests that even if consciousness emerges from brain complexity as believed by most scientists, the very existence of the phenomenon of self-awareness remains a deep mystery. The title also suggests that self-awareness involves developments beyond mind; some lower animals can have “minds” but apparently lack a sense of “self.” In other words, lower animals probably have “primary consciousness,” an awareness of their current environment. They may, however, lack the “higher consciousness” of higher animals, that is, those with awareness of self and its relation to the past, present, and future (Damasio, 2010).

The Science and Philosophy of Mind
The hard problem concerns the very existence of consciousness and self awareness (Dennett, 1991; Edelman, 1992; Edelman & Tononi, 2000; Blackmore, 2006; Chalmers, 2010; Nunez, 2010; Koch, 2012). While nearly all agree that the easy problem is appropriately approached by mainstream science, attitudes towards the hard problem cover a wide range: (1) There is no problem; the brain creates the mind; end of story.  (2) Yes, there is a problem, but we shouldn’t admit it; such talk only encourages extra-scientific “mystical thinking.”  (3) Yes, there is a problem, but it’s far too hard for today’s science to deal with.  (4) Yes, the problem is very hard, but we can take some small steps towards a better understanding of the hard problem by first addressing the easy problem with our scientific tools. We may then follow implied directions of the new information to address the hard problem. Attitude #4 is adopted throughout this essay.
I here address the following question in several contexts: What do we really know about our brains and what ignorance do we hide with fancy jargon? I will employ one of my favorite words, mokita, from one of the New Guinea languages, meaning “that which we all know to be true, but agree not to talk about.” Just to cite one example—our knowledge of long term memory storage is very limited. Such memory seems to involve protein molecules inside neurons in some way, but it seems unlikely that your grandmother’s face is stored in some protein. So a central question is this—what are the physical representations of memory, the means of memory information storage called memory traces or engrams? Are different kinds of memory stored in networks simultaneously operating at different levels of organization, that is, multiple spatial scales in scientific language? Is it possible that important aspects of memory are stored at smaller scales, say in protein molecules or even at still smaller scales? The answers are largely unknown, but posing such questions in the right context can facilitate our quest to better understand consciousness. 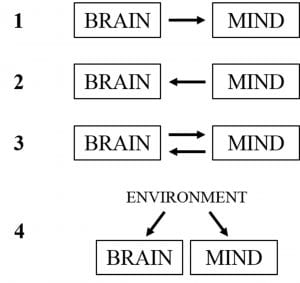 After cutting through some of the fancy jargon adopted by philosophers, the mind-brain problem may be approached relatively simply with assistance from figure 1. We know that brain activity is closely correlated with mind activity. As far as I can see, figure 1 exhausts all the possible choices for mind-brain interactions indicated by the various arrows. In case 1, the brain creates the mind, the conventional scientific view. In case 2, the opposite somehow occurs. In case 3 a two-way interaction links brain to mind. Finally, in case 4, mind and brain are linked largely through unknown external environmental influences. Case 3 is just a combination of cases 1 and 2; cases 3 and 4 can also be combined. Of course, this vastly over-simplified summary avoids the essential hard question, “Just what are the bases for the interactions represented by the arrows?” Case 1 is often considered to be the most “scientific” position—the brain creates the mind, end of story. But, if this is true, how do we account for our apparent freedom to make choices, in philosophy the often discussed problem of free will?

Free will is our apparent ability to choose between different courses of action. Most of us take our ability to choose our own paths for granted, but the free will issue repeatedly surfaces in connection with consciousness. One reason that this “inconvenient” topic keeps reappearing is that it seems impossible to reconcile free will with any strong or even moderate version of scientific determinism, in which future events are supposed to follow directly from the current state of things according to the laws of physics. In the strong deterministic view, I had no choice other than to write this essay, and you are destined to finish reading it (or not) whether you “want to” or not. I like to call this position, “autistic determinism,” so you can clearly see my bias at the outset.

Yes, more than a few intelligent philosophers and scientists actually claim that free will is just an illusion. Perhaps they see themselves stuck between a rock and a hard place—they reject dualism as unscientific; however, if they choose materialism over dualism, perhaps free will must be abandoned. The reasoning seems to go something like this—if we can’t see how free will could possibly arise, maybe it just doesn’t exist. Others avoid this extreme position and attempt to stake out a middle ground; some in materialistic camps claim that future science will somehow show that materialism and free will are compatible. These vexing questions have been around for centuries; at best we can only hope to cast a little light on the mysteries.  Both quantum mechanics and classical chaos have served to toss extreme determinism into history’s trash bin. Still, the modern physical principles just don’t seem to endow us with free will. If even the lofty field of quantum mechanics can’t save us, what can? In short, if we really believe in free will, must we reject some of the most so-called “scientific” interpretations of consciousness?  After all, what is free will other than the influence of the mind on brain and body, as apparently not allowed by conventional science?

This has been an excerpt from The New Science of Consciousness: Exploring the Complexity of Brain, Mind, and Self. To read the full article, and more excellent material for the psychotherapist, please subscribe to our monthly magazine.