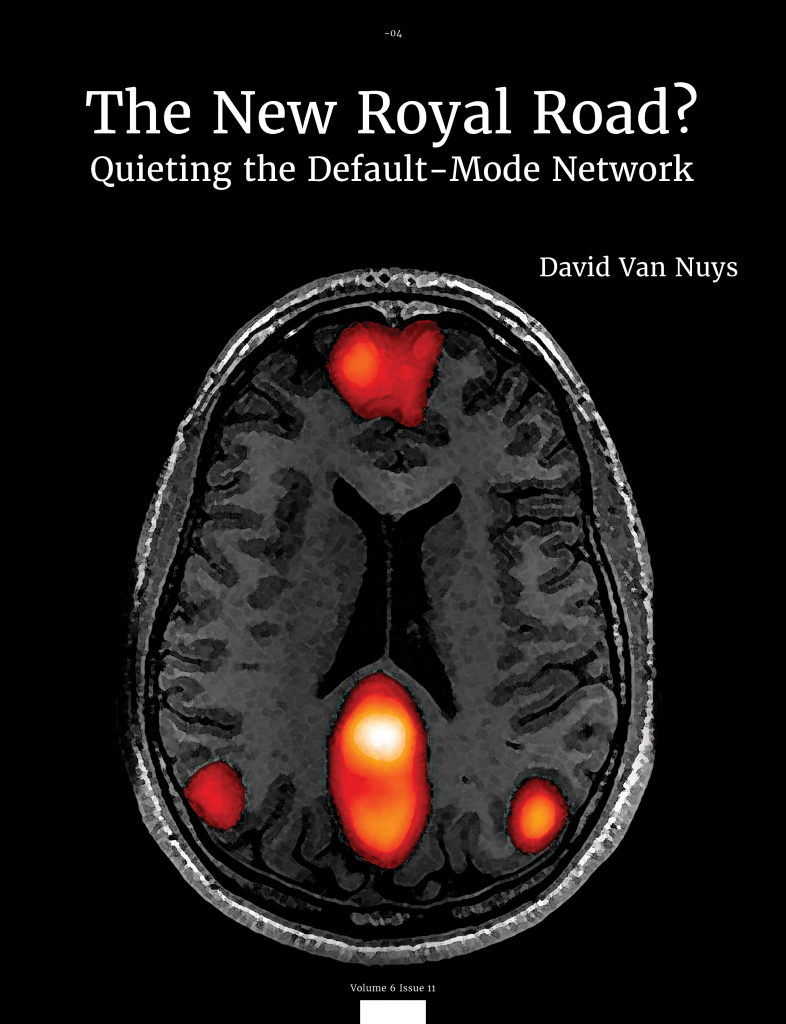 In the late 1960s I changed my mind, along with thousands, maybe millions, of others. The mind change I’m referring to is that brought on by the ingestion of psychedelics.

I recently finished reading Michael Pollan’s latest book, How to Change Your Mind: What the New Science of Psychedelics Teaches Us About Consciousness, Dying, Addiction, Depression, and Transcendence (2018). I strongly recommend it to one and all. It’s the best book I’ve ever read on the subject. Pollan comes to the topic not as a starry-eyed psychonaut but as a self-described rationalist, materialist, and religious/spiritual agnostic. Actually, though, in the process of writing the book, he decides to dip his toe into the water and ends up taking three psychedelic journeys. These do seem to put a bit of a dent in his skepticism about spirituality, with him becoming something of a meditator.

The beauty of the book is that he approaches the topic in such a thorough, open-minded, and self-revealing way. He ends up reviewing the surprisingly voluminous, pre-Leary, literature on the possible benefits of psychedelics in addition to interviewing all the leading researchers in the current revival of psychedelic research.

Having lived through and participated in the psychedelic heyday of the ’60s and ’70s, I thought I pretty much knew it all. Believe me, I learned so much from Pollard’s book that I didn’t know before, and I suspect you will, too. So many nuggets of insight there.

The nugget I want to focus on here is the theory that quieting the default-mode network (DMN) of the brain may be key to throwing open the doors of perception, to use Huxley’s phrase.

As I understand it, the DMN is a sort of resting state of the brain—which is not to say a quiescent one. Rather, there is ongoing electrical activity that keeps key circuits toned up, ready for rapid response to demands from the internal or external environment. I imagine this to be something like a car at idle; the engine isn’t off and it can leap forward as soon as the driver steps on the gas. Further imagine that the car radio is on so softly that it can’t be detected unless the car’s engine is turned off. Similarly, when the DMN is quieted, a hidden world becomes accessible.

One of the researchers Pollan interviewed is Robin Carhart-Harris, who has written extensively about the DMN. Carhart-Harris is one of those neuroscientists who believe that many of Freud’s fundamental ideas can be found to have neural correlates. I’ve always been impressed by Freud’s distinction of primary process vs. secondary process thinking. Primary process thinking is visual, amoral, associative, concrete. In other words, it’s the language of the unconscious. I also think of it as “baby thinking”. Secondary process thinking is the adult form of cognition you are probably using at this very moment; and this tends to be verbal, chronological, rational, logical, capable of abstraction, and so on. It’s easy to see why Carhart-Harris finds these processes congruent with the DMN. In a 2010 article entitled “The Default-Mode, Ego-Functions and Free-Energy: A Neurobiological Account of Freudian Ideas” published in the journal Brain, he writes:

We substantiate this synthesis by showing that Freud’s descriptions of the primary process are consistent with the phenomenology and neurophysiology of rapid eye movement sleep, the early and acute psychotic state, the aura of temporal lobe epilepsy and hallucinogenic drug states. (Carhart-Harris & Friston, 2010, p. 1265)

He goes on to say:

Specifically, we note that the psychoanalytic distinction between the primary and secondary processes (as functions of the id and ego respectively) fit comfortably with modern notions of functional brain architecture, at both a computational and neurophysiological level. Although this may seem a rather abstract and ambitious synthesis, there is in fact an enormous amount of empirical evidence from neuropsychology, neuroimaging and psychopharmacology to support it. (p. 1265)

Metaphorically, the DMN’s job is to keep the various systems in the brain in a kind of homeostatic balance. Pollan notes that this sounds a lot like the ego whose job is to keep our self-image intact and maintain a rather fixed version of reality in our mind. Both psychedelics and other consciousness-changing agencies disrupt the ego’s firm grasp on “reality” and can lead to experiences of the connectedness of everything, loss of one’s sense of a separate personal identity, and so on.

Elsewhere, in a 2012 Proceedings of The National Academy of Sciences article, Carhart-Harris and his team note:

These results may have implications beyond explaining how psilocybin works in the brain by implying that the DMN is crucial for the maintenance of cognitive integration and constraint under normal conditions. This finding is consistent with Aldous Huxley’s ‘reducing valve’ metaphor and Karl Friston’s ‘free-energy principle’, which propose that the mind/brain works to constrain its experience of the world. (Carhart-Harris et al., 2012, p. 2142)

Here we used an advanced and comprehensive fMRI protocol to image the brain effects of psilocybin. These studies offer the most detailed account to date on how the psychedelic state is produced in the brain. The results suggest decreased activity and connectivity in the brain’s connector hubs, permitting an unconstrained style of cognition.” (p. 2142)

So, when the authors of this study refer to the “brain’s connector hubs”, they are primarily referencing the DMN, and though this particular study involved psilocybin, similar results have been obtained for LSD, ayahuasca, and other psychedelics.

What is it like to be a baby? What’s it like to be a child? Our emotions go up and down. We might be in a sort of happy, sort of ecstatic state one minute, giggling, finding everything funny and silly—similar things happen on psychedelics—and then the next minute there’s a sudden shift and we’re bawling our eyes out, you know? Similar kinds of emotional sensitivities and hyper-imaginative processes occur with a psychedelic.

Also, something quite intriguing is that sense of wonder, that sense of awe that you certainly see with psychedelics. Sometimes it’s framed in a sort of mystical or spiritual way. But it’s interesting if you look at some literature, particularly someone like William Wordsworth who talks about the infant state as being a kind of heavenly state where we’re sort of closer to what you would call God, in a way.

According to Michael Pollan, Carhart-Harris and his colleague, Alison Gopnik, a University of California at Berkeley developmental psychologist, both seem to agree on the importance of baby consciousness in understanding the impact of psychedelics on adults…[wlm_private “1 Year Subscription|2 Year Subscription|3 Year Subscription|Staff|Basic AutoRenew|Standard AutoRenew|Premium AutoRenew|NPT Basic|NPT Standard|NPT Premium”]

This point has great resonance for me because it underscores my own primary insight resulting from my first LSD experience while I was a graduate clinical psychology student at the University of Michigan. When after a time the drug began to come on with some force, I had a sudden, powerful recognition: “Oh, I’ve been here before! I know this place! This is how the world was when I was little!” It was an experience of total recognition—not so young as a baby, probably more of a toddler stage, but perhaps preverbal. I remember crawling on the floor into the kitchen of the apartment where I and two of my peers had taken the acid and there I encountered a non-tripping roommate who was making himself a sandwich. I stared up at him from the floor with awe and wonder. He looked down and saw me gazing intently at him, and he bent down and held half the sandwich toward me, offering it as one might to a young child. Later, one of my fellow-tripees proposed going outside. That sent me into a panic because I thought we had an understanding that we would all stay together inside. He left anyway and I remember my nose pressed to the window as he left the house and my sense of abandonment. I was like a small child or dog who was being left behind. Although that experience was around 50 years ago, it’s still powerfully with me.

Freud declared dreams to be the “royal road” to the unconscious. Not everyone has a dream they can remember, however. Free association turned out to be a more reliable road for many patients. I think we can expand our understanding of the royal road beyond dreaming to altered states of consciousness more generally. In fact, when used as a therapeutic adjunct, psychedelics may even prove to be the super highway to the unconscious, as well as to recovery and healing. And, at the neurological level, this may mean quieting the default mode network (DMN) by whatever means available.

Pollan, M. (2018). How to change your mind: What the new science of psychedelics teaches us about consciousness, dying, addiction, depression, and transcendence. New York, NY: Penguin.

This has been an excerpt from The Neuropsychotherapist Volume 6 Issue 11 – If you would like to read all of this article and more great science from our magazine please consider becoming a member.