The Neurodevelopmental Impact of Stress, Adversity, and Trauma (part 2)

The Neurodevelopmental Impact of Stress, Adversity, and Trauma: 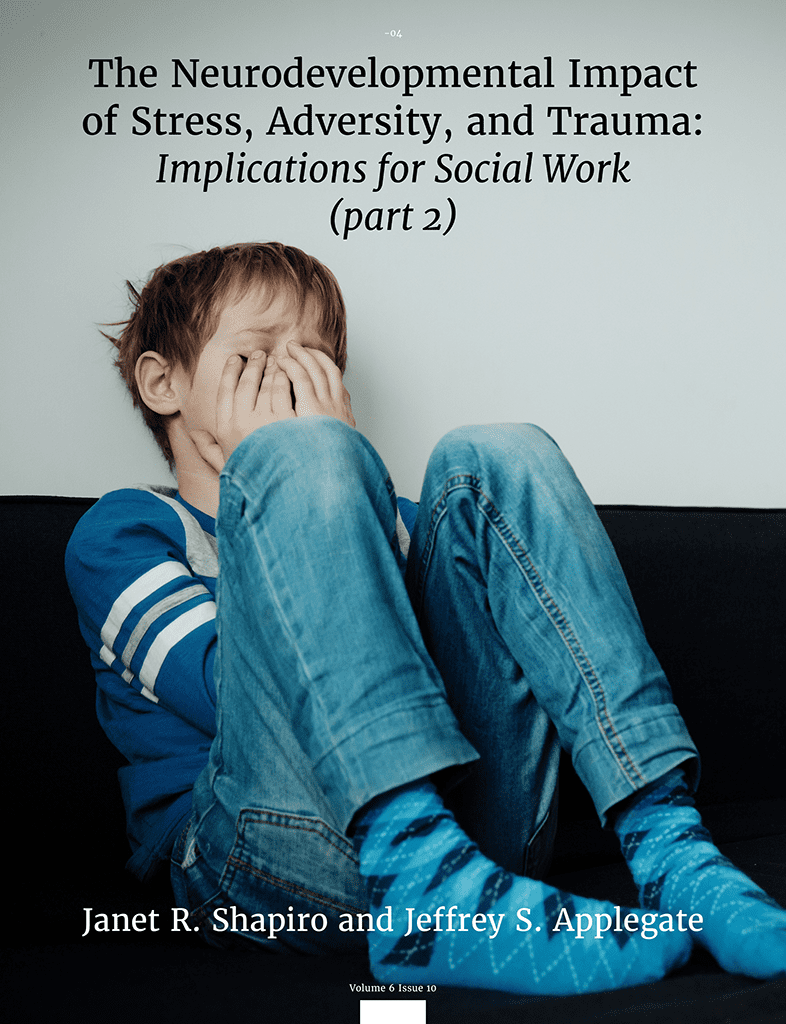 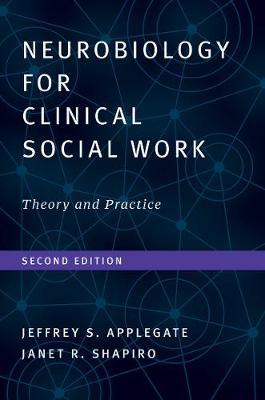 Excerpted from Neurobiology for Clinical Social Work, Second Edition, © 2018 by Janet R. Shapiro and Jeffrey S. Applegate. The following is from Chapter 5: “The Neurodevelopmental Impact of Stress, Adversity, and Trauma: Implications for Social Work.” Used with the permission of the publisher, W. W. Norton & Company.

In this section, we consider two at-risk groups of parents and children: children whose primary caregiver is depressed, as in the case of maternal depression, and the impact of parental substance use on the developing child. Considered at risk for many social, psychological, physical, and developmental reasons, these groups can each be examined in terms of a variety of risk factors that can affect the parent-child relationship in ways that impair the quality of attachment and important developmental outcomes. Familiar from a psychosocial perspective, we seek to apply the research reviewed earlier in this text that discusses the connections between caregiver-child interaction patterns, the quality of attachment that emerges, and the related neurobiological development of children in early life.

MATERNAL DEPRESSION
As reported by the National Scientific Council on the Developing Child (2009) at Harvard University, an estimated 10–20% of mothers will experience depression during the first year of their child’s life, and the incidence rate is higher for women experiencing a range of other psychosocial stressors. Thus, assessment and intervention with mothers experiencing depression either prenatally or postpartum are important areas of practice, in particular for psychosocially vulnerable families. A developmentally informed approach to the impact of maternal depression requires an understanding of the factors that can lead to experiences of depression among mothers and the ways in which the consequences of maternal depression can disrupt the formation of stable attachment bonds and related indexes of developmental well-being in infancy and early childhood. Relational disruption and loss, both related to experiences of maternal depression, can constitute experiences of deprivation in infants and young children (Shapiro, 2015).

Affective disturbances, such as maternal depression, have been shown to increase vulnerability in the developing child (Tronick & Reck, 2009). Sustained periods of maternal depression, particularly during infancy and early childhood, create a context of developmental risk (Dawson, Hessl, & Frey, 1994). Children of depressed mothers have higher rates of developmental vulnerability as indexed by impairment in the regulation of behavior and attention, increased rates of childhood depression, and higher rates of other externalizing and internalizing disorders (National Scientific Council on the Developing Child, 2009). Longitudinal studies have also shown that children of depressed mothers have lower rates of secure attachment, less well-developed social skills, and more difficulties with school readiness and peer relationships (Ashman, Dawson, & Panatogiotides, 2008).

Researchers have documented the developmental risks to the child associated with maternal depression at various developmental phases. Prenatally, infants of depressed mothers are exposed to a higher level of stress chemicals, and alterations in the infants’ immunological systems and prenatal growth patterns have been observed.

Maternal depression can create an environment in which the infant does not experience a sense of being psychologically held. Winnicott (1965) introduced the concept of the holding environment to describe the context of care that surrounds the developing child. A good-enough holding environment is characterized not by a perfect level of sensitivity and attunement, but by caregiving that is overall consistent and infused with an understanding of the infant’s emotional life, needs, and development. When the attachment relationship develops in a good-enough holding environment, the caregiver is able to successfully support the infant’s ability to modulate states of psychophysiological arousal and ultimately support the developing child’s capacity for self-soothing. When such a supportive environment does not exist, or is only partially available, the developing child may not feel psychologically held and may develop a range of responses for coping with states of psychophysiological arousal that result from being either understimulated (e.g., neglect), overstimulated by intrusive care, or disorganized because of a chaotic care environment (Fonagy & Target, 1998).

Primary developmental goals of infancy and early childhood involve learning, in the context of important attachment relationships, (1) how to identify one’s own feelings, (2) how to identify the feelings of others, (3) how to acquire the capacity to regulate affect sufficiently to maintain homeostasis, and (4) how to invest in the object world of people and exploration. Children of depressed mothers are less likely to receive the empathically attuned and contingently responsive care that would contribute to their ability to understand cause-and-effect relationships, most saliently, the relationship between their own internal states and the development of language to describe affective experience. Research has shown that children of depressed mothers, particularly those whose mothers were depressed during the child’s infancy and early childhood, are more likely to vigilantly observe their mothers’ mood states and to be highly sensitive to relatively small changes in those states (National Scientific Council on the Developing Child, 2009). Even though maternal mood may be responsive to the advent of treatment, the child’s early learning environment regarding the nature and regulation of affect may have resulted in styles of interaction, or attachment, and affect regulation that persist beyond the initial alleviation of the parental depression. Certainly, research on brain development in early life has highlighted the finding that the affectively charged relational environment of infancy is closely tied to those aspects of brain development that are primarily responsible for the experience and regulation of affect (Schore & Schore, 2010).

Infants and young children are uniquely dependent on primary caregivers for a relational environment that augments positive feelings of warmth, security, and joy, and mediates against prolonged states of negative affective arousal (e.g., sadness, anxiety). Children of depressed mothers may come to be at risk, in part, because the depressed caregiver may show either a flatness of affect or a disproportionate amount of negative affect. In either case, the caregiver may be emotionally unavailable and unable to respond contingently to the infant’s cues. Moreover, a depressed caregiver is less likely to engage in shared states of positive affect, thereby providing less opportunity for the infant’s brain to be engaged in a manner that supports the development of positively charged or positively wired connections. This theory relates to the use-dependency or experientially dependent concept of early brain development in which the synapses more often become more firmly wired into the neural architecture of the child’s brain.

Maya is a 5-month-old infant, born full term into an economically struggling family. Maya’s mother and father recently immigrated to the United States and are struggling to resettle in their new country. Maya’s mother works two jobs and often leaves Maya in the care of family members or, when necessary, neighbors. A community-based pediatrician referred Maya for a social services assessment because, though full term, she is small for her age and seems not to seek out interaction. The pediatrician was unable to coax her into a social smile or sustained eye contact and she noticed that Maya’s mother didn’t seem to expect any social recognition from Maya. A medical workup found no physical cause for Maya’s withdrawal or lack of interest in people. The social worker noticed that Maya’s mother also seemed exhausted and made very few efforts to communicate with either Maya or the worker. The worker did have at least one conversation with Maya’s mother about how hard the transition to the United States had been, and how much she missed her home country. Maya’s mother did comment that she was “glad” that Maya didn’t really “need to play” and that “she seemed ne all on her own.” Most worrisome to the pediatrician, Maya’s growth was starting to fall below expectations, and Maya’s mother reported that she was “the only baby she’d seen who didn’t really like to eat.” When the worker asked to hold Maya, Maya’s mother agreed, but then said, “See . . . she’ll settle right down with you. What difference does it make if I’m here too?” She further added, “This is like when I try to feed her. . . She just goes to sleep so . . . if she’s not hungry, I’m not going to push it.”

This vignette describes a pattern of possible maternal depression in which the mother, although trying to care for her infant, has little energy for interaction. From a brain development perspective, this is a concern because research describes the importance of affectively attuned, positively charged verbal interactions that help the developing child to augment positive experience and cope with negative states of affective arousal (Jones Harden et al., 2016). In addition, this research highlights the ways in which such patterns of interaction are key to the development of those systems involved in the regulation of affect and attention, and in the development of language that, over time, can be used by the child to represent and mediate internal states of mind and experiences (Siegel, 2012). In Maya’s case, her mother is almost grateful for her lethargy because it matches mom’s available energy. One hypothesis for exploration would be whether Maya had come to find interactions with her mother lacking sensitivity and mirroring, and perhaps even anxiety producing, leading to her withdrawal. Maya’s mother seemed particularly sensitive to Maya’s interest in the social worker. She interpreted this as proof that her own presence was not necessary, potentially a reflection of a low sense of agency that may also be associated with depression. Overall, Maya’s case shows how cycles of misread and misunderstood interactions between infant and caregiver can be related to patterns of depressive symptoms and pose risks to the development of secure attachment and to those aspects of early social-emotional development related to early interactive experience. Moreover, Maya could be at risk for nonorganic failure to thrive. Her lack of enjoyment in the feeding process (as evidenced by her falling asleep during feedings) could be a signal of poorly attuned interactions that Maya responds to by turning away, shutting down, and even falling asleep.

This was an excerpt from The Neuropsychotherapist Volume 6 Issue 10. To access this and more great content please become a member.

Read the full article as part of a trauma article download bundle here: [wlm_private “NPT Basic|3 Year Subscription|Standard Membership|Staff|NPT Premium|Standard Monthly”] Members use this link to get the download for free. [/wlm_private]