The Neglected Neurobiology of Maternal Anxiety and Depression 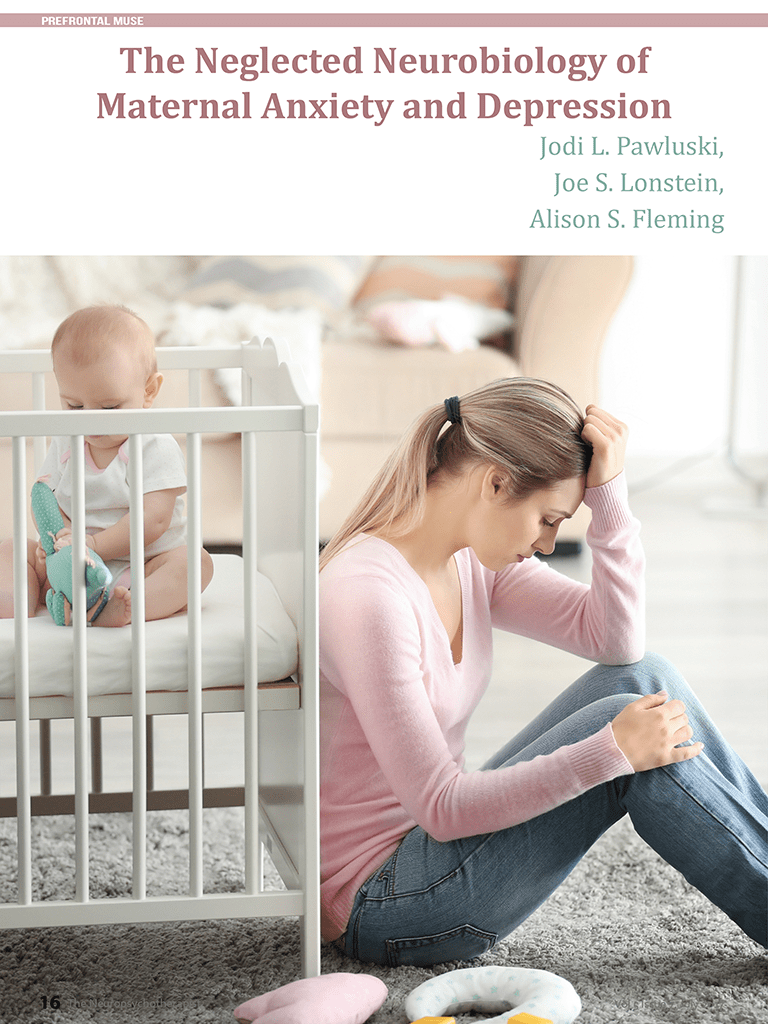 The perinatal period is a time when a significant number of women struggle with clinical levels of anxiety and depression: Estimates indicate 10–20% of 4 million peripartum women in the United States (with similar rates in Canada, Australia and Europe) have these forms of mental illness. This is in contrast to the more normative low levels of anxiety and depression that characterize many other new mothers. These maternal mental illnesses can have pervasive effects on the mother, child and family.

Given the prevalence of clinical levels of perinatal anxiety and depression and the considerable effects these illnesses can have on the child, it is quite shocking that we know so little about the neurobiology of perinatal anxiety and depression. Shouldn’t our focus as scientists, policy makers and health-care providers be to understand, treat and ultimately prevent maternal mental illnesses—illnesses that can affect 1 in 5 mothers? Why then is our understanding of the neural bases of peripartum mental illness relying on less than 25 functional magnetic resonance imaging (fMRI) studies in postpartum women? Why have we neglected the neurobiology of maternal mental illness? Is it because these illnesses are so common that they are considered normative and hence have not received adequate attention from the scientific community? Or is the reason for this neglect that these disorders are largely restricted to women, who for a long time tended not to be the focus of scientific inquiry or interest? Or is it because maternal mental illnesses are not considered different from these illnesses when they occur outside of the peripartum period? Perhaps the answer is a bit of all of these points.

Our recent review of the literature and work from of the team of Dr. Alison Fleming shows that maternal mental illnesses, although understudied, do appear to differ neurobiologically from when these illnesses occur at other times in a woman’s life. For example, women with perinatal depression (PPD: DSM-5; American Psychiatric Association, 2013) have decreased activation of the amygdala and striatum in response to non-infant related emotional words, whereas individuals with major depressive disorder (MDD) show increased activation in these same brain areas. Therefore, extrapolating conclusions from neuroimaging studies of MDD to PPD is not wise. The same concept likely applies to perinatal anxiety disorders; however, no clinical research has yet examined how anxiety disorders affect neural activation profiles in the maternal brain.

In addition, the literature points to an intricate interplay between maternal mental health, the mother–infant dyad, and the neurobiological mechanisms mediating their interactions. What we do know is that the neural systems affected by postpartum anxiety and depression overlap and interact with the brain’s maternal caregiving network. Thus mother–infant interactions are highly susceptible to disruption by maternal mental illness. Indeed, anxious and depressed mothers are prone to being irritated by their infant, and respond less sensitively, less contingently and more negatively to their infants compared with unaffected mothers. Research primarily in laboratory rodents has shed light on the important neural links between maternal affective state, maternal caregiving behaviors, and the mother–infant dyad. Research on women is just beginning to show these links as well.

The most common treatments for maternal anxiety and depressive disorders during the peripartum period are the selective serotonin reuptake inhibitor medications (SSRIs). SSRI prescription rates to pregnant women in industrialized countries (including, but not limited to Canada, USA, Australia, Iceland, Denmark, Sweden, UK, Italy, The Netherlands, and France) are on the rise; this is despite the fact that the benefits and risks of using these medications on mother and developing child are unclear. Nonetheless, SSRIs seem to alleviate peripartum depression and anxiety in many women, and remain the recommended first-line treatment for postpartum affective disorders. They are also considered more effective if coupled with psychotherapy. Psychotherapy alone, problem-solving education and other interventions can also be very beneficial in treating maternal anxiety and depression. The key is to find an effective treatment, as untreated maternal depression and anxiety is detrimental to both mother and child.

To date, there has been no clinical research exploring the effects of SSRI medications on the neurobiology of the maternal brain. However, recent work in animal models of PPD from the research of Dr. Jodi Pawluski shows that SSRIs may act on the maternal brain to reverse the effects of repeated stress (which leads to anxiety and depression) by affecting neuroplasticity in brain areas such as the prefrontal cortex and the hippocampus. This work also shows that SSRIs can act independently of maternal stress to affect the maternal brain and maternal caregiving behaviors.

A particularly intriguing nonpharmacological treatment for postpartum depression and anxiety is increased physical contact with one’s infant, regardless of breast-feeding. These tactile inputs from the infant regulate many maternal behavioral and physiological processes, including anxiety and depression: anxious or depressed mothers already touch their infants less often and less affectionately which, in turn, exacerbates their anxiety and depression. Studies on laboratory rodents, from the team of Dr. Joe Lonstein, have expanded this work to show that infant touch alone modifies the neurobiology of the maternal brain, while at the same time the mother’s touch alters infant brain development, thus modulating affective behaviors on both sides of the dyad.

What next? It is abundantly clear that maternal health has a substantial impact on the mother, child and family. To date, the neurobiology of maternal mental illness has been largely neglected. Our focus as scientists, health-care providers, policy makers and funding agencies, as well as mothers, fathers and grandparents, should be to promote research on maternal mental health and well-being; only then will we be able to effectively treat and prevent these disorders.