The limbic system (also known as the paleomammalian brain) is a collection of brain structures located in the middle of the brain. It was first defined by Paul Broca in the nineteenth century as the structures between the cerebral hemisphere and the brainstem (i.e., the limbus, or border of the brain). The limbic system is not a discrete system itself but rather a collection of structures—anatomically related but varying greatly in function. The term has been in use for about 70 years and does suggest a functionally unified system, but as this is not the case some neuroscientists believe it should be abandoned. Regardless of terminology, collectively we can think of the limbic system as the centre for emotional responsiveness, motivation, memory formation and integration, olfaction, and the mechanisms to keep ourselves safe. These are broad strokes to be sure, which is not to suggest that the neo-cortex is not involved in these functions, but these are the focal activities of the limbic system. The amygdala, hippocampus, and hypothalamus are considered the main limbic structures of clinical relevance to the practising psychotherapist. There is also the very important hub of information transfer, the thalamus, which feeds the limbic system with sensory input.

The basal ganglia, a set of subcortical structures located near the thalamus and hypothalamus, are also included in the limbic system and are involved in intentional movements. It is important to note that inadequate dopamine supply to the basal ganglia may affect posture and movement, leading to the symptoms of Parkinson’s disease. The limbic system is closely connected to the prefrontal cortex, and it is this prefrontal–limbic connection that is strengthened when practising mindfulness. The functional relevance of the limbic system to psychotherapy is obvious—as affect, memory, sensory processing, time perception, attention, consciousness, autonomic control, motor behaviour, and more are all mediated in and through this collection of structures.

This diagram below shows some of the complexity of the limbic system. Note how the olfactory bulbs feed directly into the amygdala, giving smell a particularly important role in emotional memory and evaluation of circumstances—we can smell danger faster than our “smart brain” will recognise a problem, and we can automatically recall the emotions of a past love at the smell of the perfume they used to wear. It is also striking that the size of these structures has little correlation to their power and importance in this amazing system. 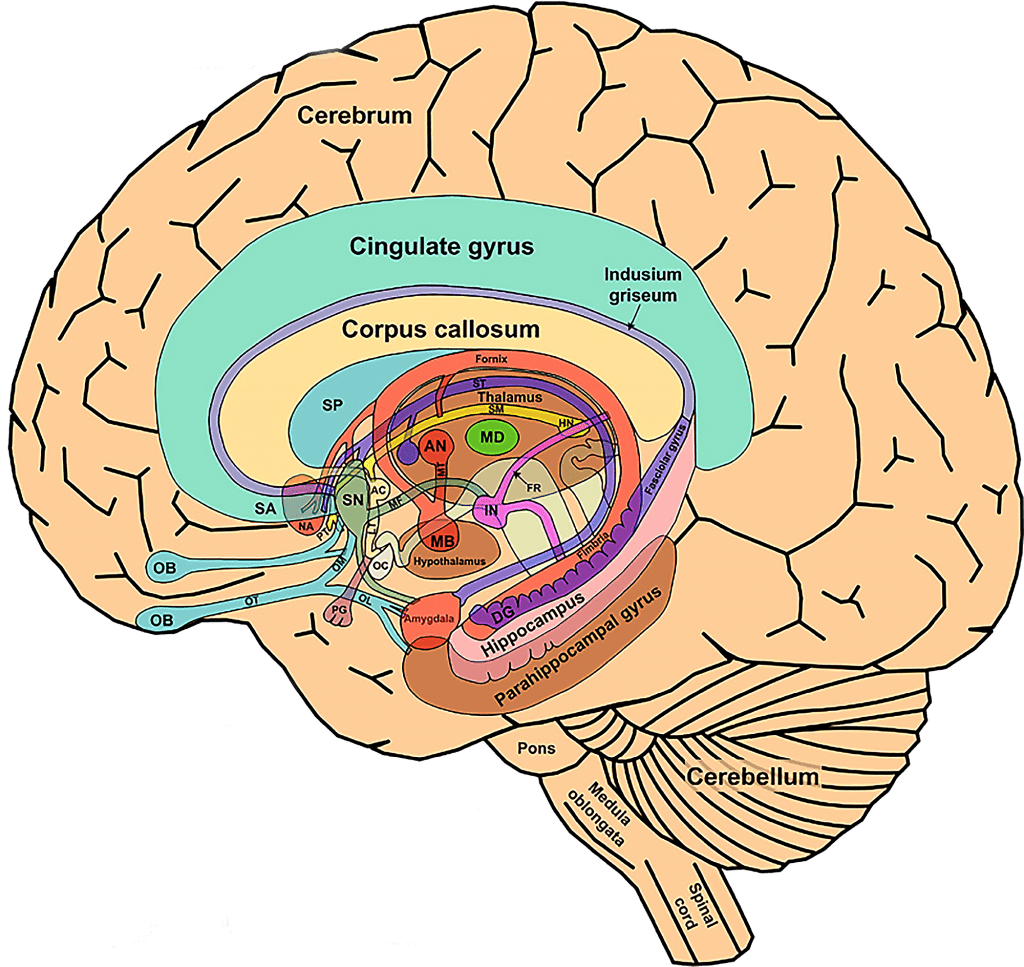 It is absolutely amazing how the limbic system works. Thank you for your detailed description. It features strongly in my book on consciousness. The more I learn the more I know I don’t know. Kind regards, Beverley Kirk PhD

Thank you Dr. Kirk. We totally agree that the more we learn the more obvious it becomes that we are just scratching the surface! Would love to learn more about your book. Maybe you would like to share something of what you have learnt for our readership? Let us know if you do.

Thanks Dr Kirk.
What an excellent description and graphic. So clear and concise!

I’ve had the right hand side of my frontal lobe removed in 2002 and my main problem is memory tho the past 4 yrs I’ve been sweating bad in my sleep which has given me chronograph fatigue only sleeping 4 hrs at night. My specialist said automatic dis function but don’t know how to spare entry me from sweating. It causing problems with my personality and memory is getting worse.

Thank you SO much for this VERY simple description of the limbic system! It was extremely helpful for this re-entry RN student mama!! Best to you.

[…] parts of the brain in particular are two blame, prefrontal cortex and the limbic system. In depression, something is off between how these two regions act and communicate with each […]

Emotion and Memory in the Brain: A Look Into the Limbic System – International Youth Science Journal