The Importance of Breaking Rules 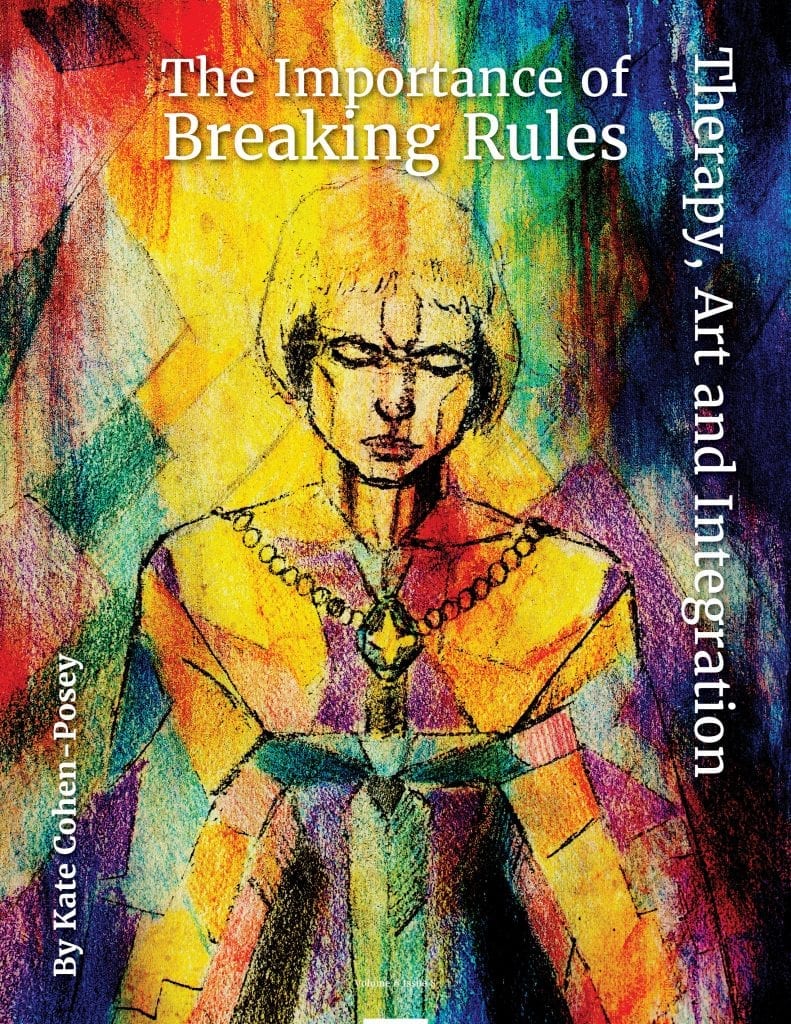 The Importance of Breaking Rules—Therapy, Art and Integration

It has been more than fifteen years since I began integrating art with ego–state work. Evocative images can personify distressing thoughts and emotions, or become a projective device for discovering strengths, abilities, and inner resources. My approach has gradually evolved to include mindfulness, somatic, and brainspotting strategies. I currently use Brain Change Cards (BCCs) that illustrate hurt, fearful, angry, critical, pushy, pleaser, avoiding/tempting, and also uplifting images, in a set of image-cards. One of my rules when using BCCs is not to tell clients the origin of a picture except when I obviously should. How does this work?

It is a bright June morning. My first client of the day, “Julie”, had missed her two previous appointments due to labor contractions from an over-stressed womb that was all too eager to release the fetus it holds. But now the baby is viable, and labor is set to be induced in five days. Meanwhile, Julie is grieving the separation from her 10-year-old daughter, Myshell, who is visiting her grandmother in a Central American country. But, now her daughter doesn’t want to return to America. If she stays longer than three months, she will not be able to return for five years, and her mother will not be able to visit her for several months due to green card issues and the convoluted immigration laws. Julie had warned and implored her daughter of this consequence to no avail. Now she talks to Myshell on the phone, but avoids feelings. Any questions that might evoke loss, regret, and distress generated by ex-in-law or pre-teen dramas are forboden.

Lately, Myshell has been tip-toeing on the edges of emotions: she misses her dog; she sends her mother pictures she took of herself and her new stepfather, with whom she had just bonded before she left; and she has her new school friends call her mother to sing Happy Birthday. But, Julie explains, “I cannot encourage these feelings. There’s nothing I can do to help her at a distance of thousands of miles.”

Did you notice the entrée into therapy that Julie provided? Accepting her “invitation”, I say to Julie, “It sounds like a part of you is saying: You cannot help her. Which of these eight ‘inner-critic’ pictures might represent that part?” She picks a thumbs-down card squishing a tiny person and elaborates that this part of her is stating she is not strong enough to be helpful. She can feel hot pressure in her chest and her heart rate zooms. I wonder if there is an eye position (i.e., a brainspot) that will amplify those sensations even more. Julie is precise: when she looks to her left and down, heat rises; however, her activation of sensations returns to neutral pretty quickly by being mindful of body sensations and focusing on her brainspot. She smiles, but looking again at the belittling image and thinking of her circumstances brings back the previous sensations, full force.

We take time to look through 24 uplifting images. She feels totally connected to a woman wielding a sword, loves the calm spirituality of two trees lit by a setting sun, and says the butterfly perched on the turtle’s nose is a rare moment that needs to be cherished. It soon becomes apparent that the woman with the sword is friends with the thumbs-down card. Julie had always felt so strong and believed she could do anything she set out to accomplish, but she cannot navigate the daunting immigration maze. So now she is weak. I ask Julie to silently ask the thumbs-down card if it realizes that there are limits to what Julie can achieve. There is no reply. Angst crashes back like a tsunami.

I know what a resilient woman Julie is and that focusing on her images of calm spirituality and cherishing the moment will quickly soothe her body. Indeed, a sense of peace returns as she gazes at the uplifting images that (I know) are activating her left prefrontal cortex (PFC), inhibiting her amygdalae (anger/fear centers), and activating a release of motivating, focusing, energizing dopamine that always accompanies other rewarding neurochemicals. This time she is at peace when there is no answer to her silent query: Do you realize Julie has limits?

End of session, right? Wrong! I cannot resist. I tell Julie that butterflies alighting on the tips of turtles is a common occurrence in another Central American country, Ecuador. The butterflies are having their afternoon tea, in a process known as “tear-feeding”, which the slow-moving reptiles seem so willing to provide. I tell Julie, “This is how you can help Myshell: lightly drink in any tears she might provide, but this can only be done if you encourage her to share her regret and loss from self-inflicted exile.” Then I say, “The woman with the sword is indeed strong, but she will be burned at the stake for the task she has taken on—she is Joan of Arc. Being strong has its downside.” By giving the name of one pictures and the origins of another, I’ve just broken my first rule of incorporating art into psychotherapy: Do not tamper with clients’ personifications and projections.

According to the Institute for Integrative Psychotherapy (http://www.integrativetherapy.com/en/integrative-psychotherapy.php), an organization approved by the American Psychological Association to offer continuing education, integrative approaches combine two or more methods in ways that each therapy enhances the other. Clearly, my session with Julie is an integration of ego–state, mindfulness, brainspotting, and somatic therapies. But is it something more?

Ego–state therapy is readily apparent when the therapist says, “It sounds like a part of you is saying, You cannot help (your daughter). I think of ego–state therapy as a divide-and-conquer strategy. Julie is now less identified with her thought, I cannot help Myshell, and there is a hypnotic implication that something else within her might believe otherwise. Assagioli (1965/2000) called it disidentification in his psychosynthesis approach. Many years later the originators of acceptance and commitment therapy called this phenomenon cognitive defusion—that is, people are less “fused” with their thoughts via observing, reframing, or externalizing them (Hayes, Strosahl, & Wilson, 1999). Around the same time, Eugene Gendlin (1997) took ego states one step further, stating that we are the sum of many interacting processes. Julie’s thought has been reframed as a part, creating distance between it and something else that makes room for presence. Ann Weiser Cornell (2005) describes this presence as a state of being that is able to be and interact with anything with openness, compassion, and patience.

After reframing Julie’s thought as a part, I ask her to choose one of eight pictures that could personify this subpersonality. The picture of a thumb squishing a tiny person yields more information: Julie is not strong enough to be helpful.

Not only are pictures excellent tools for externalizing inner voices, they help people to elaborate their thoughts and feelings through free association. Now distance can really be created. People may keep a personified thought close to them or place it far away. I could have asked Julie where she would like to put the thumbs-down picture. One of the eight inner-critic pictures in my set of cards is so piercing that, when chosen, clients often recoil and ask that it be sent to a far corner of the room. [Content protected for subscribers only]

A member and don’t see the full article? You may need to log in.

Read this magazine as a 2 hour course. [Content protected for subscribers only]