The immune link between a leaky blood-brain barrier and schizophrenia

Research from the School of Veterinary Medicine, Perelman School of Medicine, and Children’s Hospital of Philadelphia points to the involvement of the brain vasculature as a contributor to mental disorders such as schizophrenia.

Like a stern bodyguard for the central nervous system, the blood-brain barrier keeps out anything that could lead to disease and dangerous inflammation—at least when all is functioning normally.

That may not be the case in people with schizophrenia and other mental disorders, suggest new findings from a team led by researchers from the School of Veterinary Medicine, Perelman School of Medicine, and Children’s Hospital of Philadelphia (CHOP). In these individuals, a more permissive barrier appears to allow the immune system to get improperly involved in the central nervous system, the researchers showed. The inflammation that arises likely contributes to the clinical manifestations of neuropsychiatric conditions.

“Our hypothesis was that, if the immune function of the blood-brain barrier is compromised, the resulting inflammation will have an impact on the central nervous system,” says Jorge Iván Alvarez, an assistant professor at Penn Vet and senior author on the work, published in the journal Brain. “With that in mind, we think these findings could also be used to understand how the blood-brain barrier and neurological processes impact not only schizophrenia but mental disorders at large.” 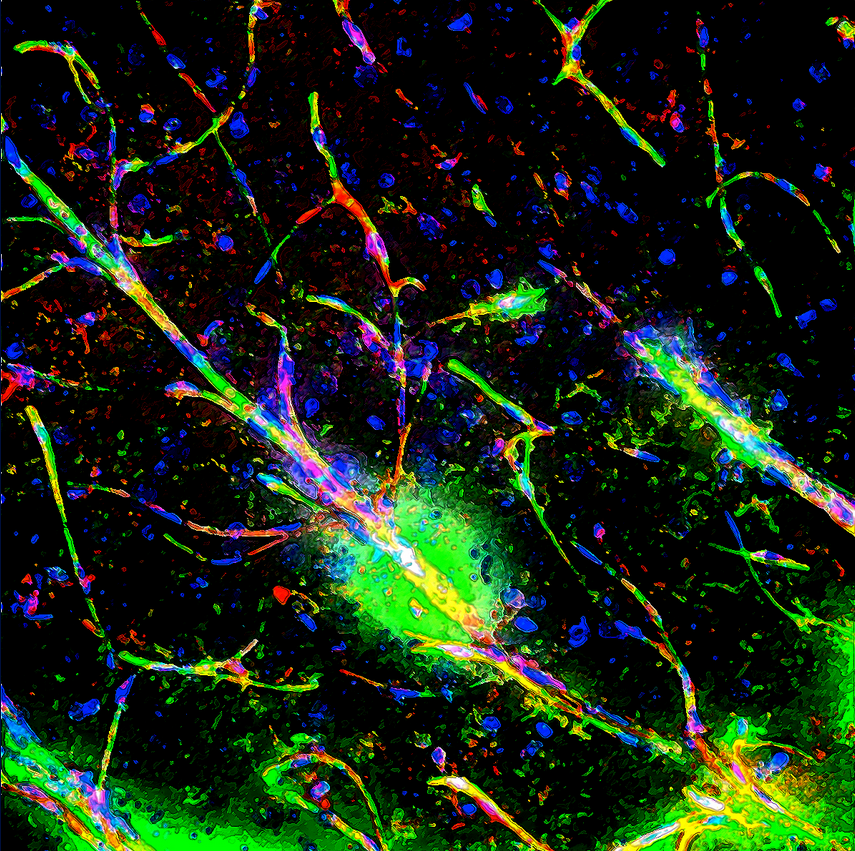 A genetic condition known as 22q.11.2 deletion syndrome is associated with an increased risk of schizophrenia. A Penn Vet-led team found that a leaky blood-brain barrier, allowing inappropriate immune involvement in the central nervous system, may contribute to this or perhaps other neuropsychiatric conditions. (Image: Courtesy of Jorge Iván Alvarez)

The research team pursued the study focused on a rare condition called 22q11.2 deletion syndrome (22qDS), in which people are born missing a small portion of DNA from chromosome 22. Roughly a quarter of people with this syndrome go on to develop schizophrenia. Penn and CHOP have a community of researchers who study the condition, often as a way of probing deeper into the mysteries of schizophrenia.

This disorder had not been a focus for the Alvarez lab, however, until he gave a talk at CHOP on his area of expertise—the blood-brain barrier—and was approached by an attendee afterward.

“We started talking about the fact that, in this deletion syndrome, one of the missing genes is very important for blood-brain barrier function,” Alvarez says.

That attendee, Stewart Anderson of CHOP, had been studying 22qDS, and together he and Alvarez began collaborating to evaluate whether the blood-brain barrier and its effect on the immune system were playing a role in the condition.

As a first step, the group used a technique whereby stem cells from 22qDS patients diagnosed with schizophrenia, as well as healthy controls, are coaxed to develop into blood-brain barrier endothelial cells, the cells that form a tightly regulated “wall.” In experiments led by Vet School doctoral student Alexis Crockett, they found that the barrier function in cells derived from 22qDS patients was more impaired than those derived from the healthy controls, which were more restrictive. They confirmed these findings in mice bred to have a version of 22qDS, finding that their blood-brain barrier was likewise leaky compared to normal mice.

The brain is typically considered “immune privileged,” meaning that the surveillance carried out by immune cells and immune mediators on the central nervous system is not only regulated by the physical blockade of the blood-brain barrier but also by endothelial cells making the barrier express lower levels of immune signaling molecules.

To see if 22qDS compromised this immune privilege, the researchers again looked to patient stem cells induced to grow into blood-brain barrier cells and to their mouse model. In both cases, they observed impairments in the immune privilege properties of the barrier, with more immune cells and pro-inflammatory molecules able to cross it.

As a final validation of their findings, the researchers examined post-mortem brain tissue from three 22qDS patients and three controls. Similar to their work in cultured cells and the mouse model, they found evidence of impairment in the blood-brain barrier’s physical and immune protective functions.

“This was the corroboration process, replicating all of these observations in human tissues,” Alvarez says.

“Because 25% of 22q patients develop schizophrenia, it may be possible that these mechanisms taking place in 22q are applicable to idiopathic schizophrenia,” Alvarez says. “And when 22q patients are studied in detail, up to 80% are found to have some form of mental disorder, so these findings may well extend to other disorders as well,” including perhaps depression or autism, he says.

In future work, Alvarez and colleagues will be exploring the role of the blood-brain barrier further, narrowing in on what processes are involved in the barrier’s increased permeability, including a look at astrocytes, cells that normally enhance barrier function.

Further insights into the connection between inflammation and neuropsychiatric disease, Alvarez says, may one day lead to therapies that address inflammation by manipulating the immune response.