The Heart: King of Organs 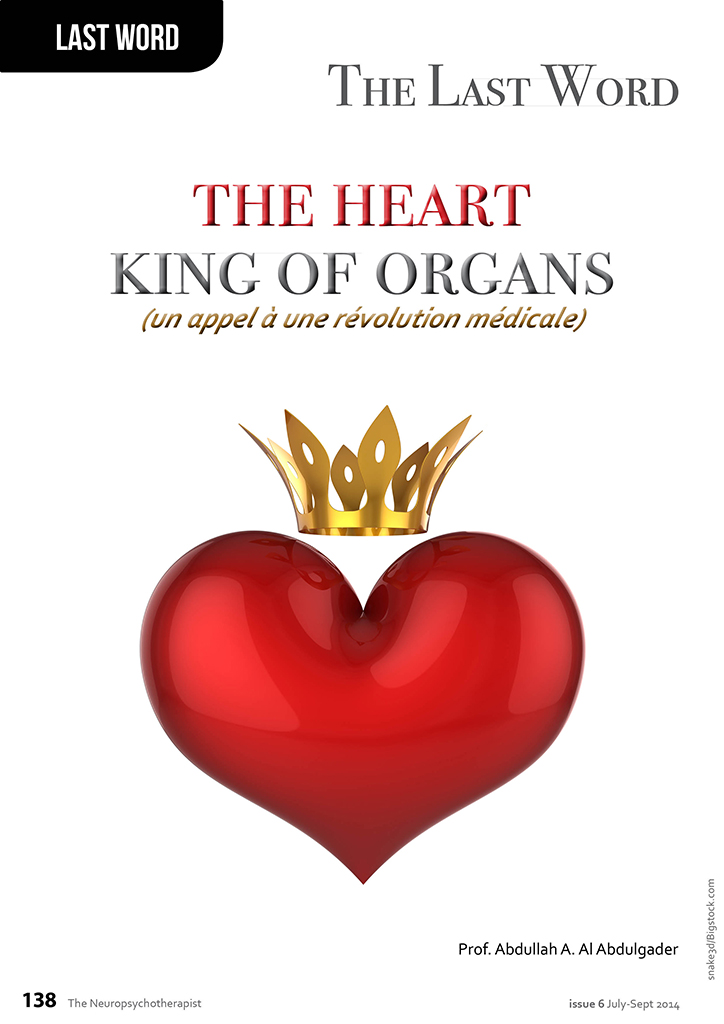 The explosive technical advances of the 20th century were not without significant drawbacks in our interpretation of scientific knowledge. A prominent example of this was the sense of the human heart as merely a pump. In contrast to the understanding of the heart previously recognized by the most important civilizations in human history, the cardiac sciences in the 20th century deprived the heart of its pivotal role as the seat of the emotions in learning, decision-making, and intuition, which had been the implicit understanding of ancient civilizations. The heart is a sensory organ, and it acts as a sophisticated information encoding and processing center that enables it to learn, remember and make independent functional decisions. In 2014, therefore, it is somewhat embarrassing to practice in the cardiac sciences without acknowledging the electromagnetic, neuro-cardiac, biophysical, and energetic interactions of the human heart with the surrounding environment. Our new perspective is to see the human heart as the center of a spectrum of sciences ranging from genes to galaxies.

The weight of scientific evidence supporting the view that the human heart has different mechanistic interactions with its surroundings is increasing—interactions as near to the heart as other body organs and as far away as the planetary orbits and solar flares. The human heart is a sensitive detector, which is reactive to geological, geophysical, and astrophysical changes. This fact is unavoidable if we are prepared to discover the mysteries of the human heart in health and disease.

In the language of mainstream cardiology today, cardiac memory refers to T-wave changes induced by ventricular pacing, or arrhythmia, which accumulates in magnitude and duration with repeated episodes of abnormal activity. Cardiac memory can also be interpreted in terms of ventricular action potential. Our current vision of neuro-cardiology and modern psychophysiological research requires new theories in order to encompass a wider understanding of cardiac memory as the principal memory involved in information processing and human behavior. This new perspective is a good reason to focus not only retrospectively but also prospectively on the mostly neglected scenarios of psychobehavioral changes in heart transplant recipients.

Chronobiologically interpreted, ambulatory blood pressure and heart rate monitoring is a new visionary practice with true potential to revolutionize risk aversion strategies in treating heart disease. It renders the diagnosis of hypertension more reliable and detects otherwise undiagnosed severe diseases such as exaggerated diurnal over swing that can occur with or without an elevation of mean blood pressure. The implementation of this new philosophy assumes that, in the near future, the administration of medications to treat heart disease should be optimized along the circadian scale. Even social diseases like war, terrorism, and crime, and natural cataclysms like earthquakes can be analyzed and forecast utilizing sensitive physiological parameters such as systolic blood pressure and heart rate variability.

The persistent false perception of the human heart as merely a pump in isolation from the surrounding environment creates major gaps in our knowledge towards better understanding the etiology and patho-mechanisms of cardiac disease. Cardiovascular disease is still at the top of the list as a major killer worldwide, yet it is hardly surprising that meta-analysis reviews looking at the outcomes of modern interventions in the treatment of heart disease in the last 30 years have not shown any significant improvements in long-term morbidity and mortality rates.

Our new understanding of the science of heart rate variability and its spectrum of frequencies that have significant correlations to solar activity is breaking news in the history of science, and this needs to be translated into clinical practice to minimize, or destroy, the burden of heart disease in nations and individuals. For example, the efficient application of heart rate modulation techniques, such as electro-stimulation and prescribing frequencies that utilize the power of modifying the heart’s rhythm to treat heart disease, herald a new era in medical history to treat the body by the body and by the physics of nature. Our success in treating systemic hypertension in the short term by utilizing this concept of cardiac coherence should encourage the world’s medical communities to adopt these new and safe therapeutic modalities. Furthermore, shifting people and individuals to a more frequent cardiac coherent state should increase our intuitive intelligence and collective consciousness and consequently activate our innate emotions to spread love, compassion, and mercy.

Even the pumping functions of the heart should be exposed to a scientific critique. The failure of the heart’s pumping function in congestive heart failure is currently creating major health and economic problems in individuals as well as all nations, but research in a few medical centers around the world to develop more efficient ventricular assistive devices will not be able to provide an efficient alternative to the human heart without incorporating this new understanding of the heart as a major sensory organ. Indeed, it is impossible to provide the sole power for the 100,000 km of the human circulation journey merely according to the rules of mechanical physics for assessing myocardial wall stress.

The human circulatory system is unique in that, in an upright position, the heart is located 130-160 cm above the ground while the brain, which needs to be constantly perfused by blood, is 30-40 cm higher. Blood tends to accumulate in the organs that lie below the heart and needs to be transported back to the heart against the forces of gravity for normal diastolic functions. The extreme paucity of research in diastolic dysfunction—and its correlation to the philosophy of quantum gravity—is another major obstacle to a proper understanding of the pathophysiology of congestive heart failure, which needs to be immediately addressed. The changing physiology of the human heart in microgravity, and increased gravity in the environment, may contribute to our knowledge in this direction. The role of the heart’s electromagnetic field, and the quantum physics driving the gravito-electromagnetic forces that enable the heart to control circulation with extraordinary ease and a delicate equilibrium, should be explored by scientists as a top priority.

The consequences of these new discoveries of the heart as the master of the psychophysiology of the human body and its external interactions are tremendous. One of the major consequences is its contribution to decisions on the termination of human life in the case of individuals who are claimed to be brain dead. Major discussions on this issue occurred at high-ranking religious and legislative levels in different countries following the recommendations of the King of Organs Conferences in Saudi Arabia in 2006, 2008, 2010 and 2012. The practice of considering the absence of cortical function as true death, in the presence of a functioning cardiovascular system, should be submitted to immediate revision in all countries, in view of the newly recognized role of the human heart. This new understanding should herald new hopes of mercy on the horizon, to alleviate an agony extending back to 1969.

The fact that the human heart is the largest and most dominant generator of the electromagnetic field in the body has potential major implications in regenerative medicine. Heart sound and magnetic field may work together to establish what we call an information, or morphogenetic field, which is driving the fate of our organs during organogenesis. Physical stimuli, including magnetic field and sound frequencies as nano-mechanical energy,  affect cell behavior including stem cell commitment and terminal differentiation quite remarkably, without the intervention of chemical agonists or viral vector mediated gene delivery.

We assume that the human heart as the principal biological generator of the pulsating electromagnetic field with its associated frequencies should make a significant contribution to the superposed quantum states of different space–time geometry and quantum gravity, giving rise to individual as well as global consciousness. This understanding is stressed by the fact that consciousness-shift occurs immediately after the cessation of heart beats.

This new philosophy in the cardiac sciences should bring both cardiologist and physicist closer to the ancient wisdom—that the human heart is the master of the emotions, and behavior, and the seat of the soul. There is no true reason to prevent the existence of a new hybrid knowledge between modern science and ancient wisdom, which is expected to generate a visionary future in the practice of cardiology. Immam Algazaly (1058-1111 BC) in his famous book, Wonders of the Heart, highlights astonishing insights into the true role of the human heart. The modern and state-of-the-art cardiac sciences, which we are calling for, are just now at the threshold of what Imam Algazaly wrote, around one thousand years ago.

Miraculous and paranormal definitions, which were considered taboo in all religions and cultures in the past, and which included the spirit, the soul, and its true interactions with the human heart, should be closer to our understanding. The coherent narrative stream of the rule of the heart and its connections to the underlying universe, which we perceive through our consciousness, is a deeper call for higher wisdom. This is not a simple alert to change but a serious call for revolution.