The Gut As A Key Player In Neuroscience

The Gut As A Key Player In Neuroscience 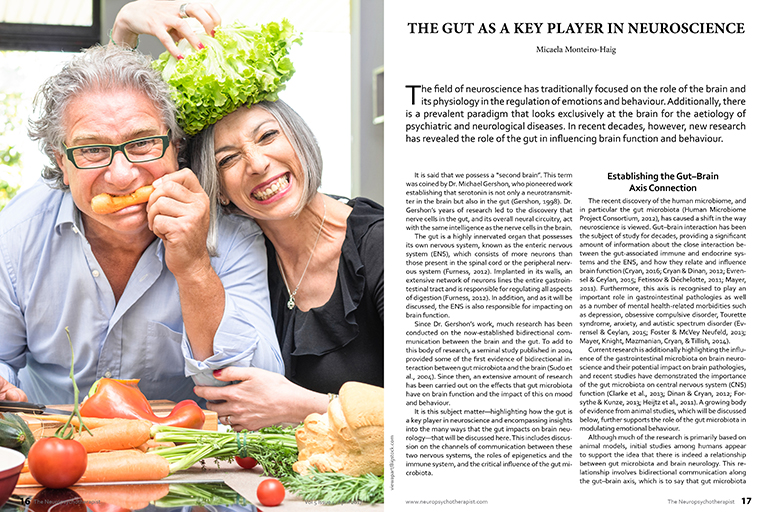 The field of neuroscience has traditionally focused on the role of the brain and its physiology in the regulation of emotions and behaviour. Additionally, there is a prevalent paradigm that looks exclusively at the brain for the aetiology of psychiatric and neurological diseases. In recent decades, however, new research has revealed the role of the gut in influencing brain function and behaviour.

It is said that we possess a “second brain”. This term was coined by Dr. Michael Gershon, who pioneered work establishing that serotonin is not only a neurotransmitter in the brain but also in the gut (Gershon, 1998). Dr. Gershon’s years of research led to the discovery that nerve cells in the gut, and its overall neural circuitry, act with the same intelligence as the nerve cells in the brain.
The gut is a highly innervated organ that possesses its own nervous system, known as the enteric nervous system (ENS), which consists of more neurons than those present in the spinal cord or the peripheral nervous system (Furness, 2012). Implanted in its walls, an extensive network of neurons lines the entire gastrointestinal tract and is responsible for regulating all aspects of digestion (Furness, 2012). In addition, and as it will be discussed, the ENS is also responsible for impacting on brain function. 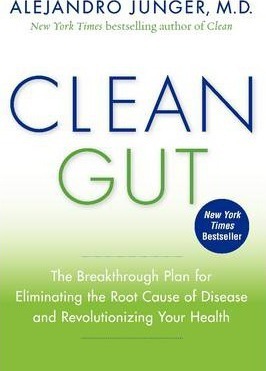 Clean Gut - get it at BookDepository

Since Dr. Gershon’s work, much research has been conducted on the now-established bidirectional communication between the brain and the gut. To add to this body of research, a seminal study published in 2004 provided some of the first evidence of bidirectional interaction between gut microbiota and the brain (Sudo et al., 2004). Since then, an extensive amount of research has been carried out on the effects that gut microbiota have on brain function and the impact of this on mood and behaviour.

It is this subject matter—highlighting how the gut is a key player in neuroscience and encompassing insights into the many ways that the gut impacts on brain neurology—that will be discussed here. This includes discussion on the channels of communication between these two nervous systems, the roles of epigenetics and the immune system, and the critical influence of the gut microbiota.

Establishing the Gut–Brain Axis Connection
The recent discovery of the human microbiome, and in particular the gut microbiota (Human Microbiome Project Consortium, 2012), has caused a shift in the way neuroscience is viewed. Gut–brain interaction has been the subject of study for decades, providing a significant amount of information about the close interaction between the gut-associated immune and endocrine systems and the ENS, and how they relate and influence brain function (Cryan, 2016; Cryan & Dinan, 2012; Evrensel & Ceylan, 2015; Fetissov & Déchelotte, 2011; Mayer, 2011). Furthermore, this axis is recognised to play an important role in gastrointestinal pathologies as well as a number of mental health-related morbidities such as depression, obsessive compulsive disorder, Tourette syndrome, anxiety, and autistic spectrum disorder (Evrensel & Ceylan, 2015; Foster & McVey Neufeld, 2013; Mayer, Knight, Mazmanian, Cryan, & Tillisch, 2014).

Current research is additionally highlighting the influence of the gastrointestinal microbiota on brain neuroscience and their potential impact on brain pathologies, and recent studies have demonstrated the importance of the gut microbiota on central nervous system (CNS) function (Clarke et al., 2013; Dinan & Cryan, 2012; Forsythe & Kunze, 2013; Heijtz et al., 2011). A growing body of evidence from animal studies, which will be discussed below, further supports the role of the gut microbiota in modulating emotional behaviour.

Although much of the research is primarily based on animal models, initial studies among humans appear to support the idea that there is indeed a relationship between gut microbiota and brain neurology. This relationship involves bidirectional communication along the gut–brain axis, which is to say that gut microbiota influence CNS function and that the CNS influences the gut microbiota composition through its effects on the gastrointestinal tract (Evrensel & Ceylan, 2015; Mayer, Tillish, & Gupta, 2015).

The gut–brain axis is a term to collectively describe the interrelationship and biochemical signalling between the brain and the gut (Stilling, Dinan, & Cryan, 2014). It encompasses two nervous systems—the CNS, comprised of the brain and spinal cord, and the nervous system of the gastrointestinal tract, the ENS (Stilling et al., 2014). These two nervous systems are formed at the same time during foetal development and are created from the same tissues (Tortora & Derrickson, 2006). There are several ways in which they connect and communicate: the circulatory system acts as a vehicle for the endocrine and immune systems of the gut to relay messages to the brain via hormones and chemical messengers (Cryan & Dinan, 2012); the vagus nerve (the tenth cranial nerve) conducts bidirectional neural communication through vagal nerve stimulation (Cryan & Dinan, 2012); and, recently, with the discovery of lymphatic vessels in the brain (Louveau et al., 2015), a third route of gut–brain communication suggests that gut-derived signals could conceivably enter the brain directly from the lymph.

The term microbiota–gut–brain axis has also been suggested to include the gut microbiota in the interplay as a communication channel that coordinates the behaviour of healthy gut bacteria with brain activity (Dinan & Cryan, 2012). So far, it has been estimated that there are 300 trillion bacteria in the large intestine (Theoharides, 2015). The compilation of some one thousand species of microbes includes one thousand times more cells than exist in the brain and spinal cord, and ten times more than the number of human cells in the entire body (Theoharides, 2015). This has led some to refer to the gut microbiota as an organ that rivals the brain in complexity (Theoharides, 2015).

Resident microbiota colonise the human large intestine shortly after birth and remain throughout life (Foster & McVey Neufeld, 2013). This colonisation by bacteria exerts a major role in the development and maturation of the human endocrine and immune systems, both of which influence CNS function (Cryan & O’Mahony, 2011). In addition, the microbiota–gut–brain axis has a significant impact on brain development and behaviour—the primary route used by gut bacteria to transmit messages to the brain being via activation of the vagus nerve (Bercik, Denou, et al., 2011; Bravo et al., 2011; de Lartigue, de la Serre, & Raybould, 2001). 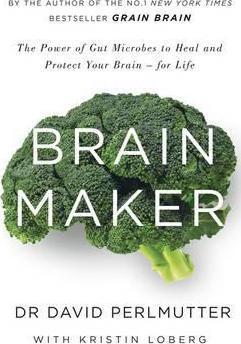 Brain Maker : The Power of Gut Microbes to Heal and Protect Your Brain - for Life. Purchase from BookDepository

The gut microbiota are influenced by several factors, including genetics, diet, metabolism, age, antibiotic treatment, and stress (Foster & McVey Neufeld, 2013). Many metabolites synthesised by the gut bacteria have been found to act as epigenetic modulators, with research suggesting that microbiota and its metabolites influence genomic reprogramming (Kumar et al., 2014; Stilling et al., 2014). Epigenetics encompasses modifications of gene expression that are due to environmental factors and do not affect the genetic code (Kumar et al., 2014). Recently, there has been a growing appreciation of the role of epigenetics in brain function, as well as psychiatric disorders such as depression, drug addiction, developmental disorders, and schizophrenia arising from neurological changes in gene expression and transporter systems, receptor signalling, and neurotransmitter production (Gómez-Pinilla, 2008; Nikolova et al., 2014; Tsankova, Renthal, Kumar, & Nestler, 2007).
Other functions of intestinal microbiota include: synthesis of vitamins; the maintenance of gastrointestinal barrier integrity (to keep out harmful bacteria, viruses and parasites); assistance with digestion; absorption of nutrients and detoxification; prevention of infections and secretion of potent antibiotic substances such as bacteriocins; influence on local and systemic antioxidant status; decreased production of inflammatory cytokines (immune system cell-signalling proteins); and modulation of cortisol and adrenaline, the stress hormones implicated in affective disorders such as major depression (Bested, Logan, & Selhub, 2013; Brogan, 2016; Dinan & Cryan, 2012).

Many of the beneficial effects of the microbiota in the gut are dependent on vagal activation affecting brain function. While the molecular mechanisms underlying how gut bacteria affect vagal signalling is yet to be fully elucidated, direct neural routes of communication between the ENS and CNS are in part attributed to sensory neurons of the myenteric plexus in the ENS, where they offer the first point of contact for the intestinal microbiota in the gut lumen. These sensory neurons are in close synaptic communication with vagal nerve endings (Foster & McVey Neufeld, 2013; Gershon, 1998).
The brain also obtains information from the gut via the luminal epithelial chemoreceptors, specialised cells that respond and relay information regarding bacterial metabolites, such as neuroactive compounds that are contained within the gastrointestinal lumen and have the potential to be interpreted and acted upon by parts of the brain (Breer, Eberle, Frick, Haid, & Widmayer, 2012). These neuroactive compounds include short-chain fatty acids, and a variety of amino acids, neurotransmitters, and neuromodulators such as gamma-aminobutyric acid (GABA), tryptophan, noradrenaline, serotonin, dopamine, acetylcholine, and cytokines (Cryan & Dinan, 2012). 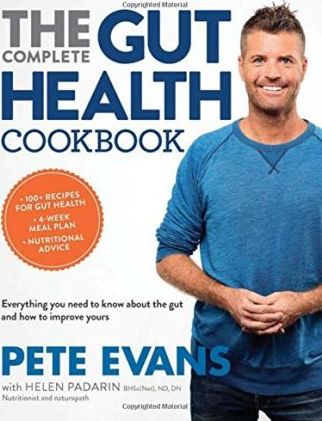 The Complete Gut Health Cookbook : Everything You Need to Know about the Gut and How to Improve Yours - from the BookDepository

There is increasing evidence that gut microbiota directly interact with and produce effects on CNS neurophysiology that ultimately influences host behaviour. The ability of gut microbiota to influence behaviour may be due to their ability to produce and recognise neurochemicals that are analogous in structure to those produced by the host’s nervous system (Lyte, 2013). Secreted neurotransmitters by gut bacteria in the intestinal lumen may induce the release of certain molecules that, in turn, modulate neural signalling within the ENS and consequently influence brain function signalling and behaviour of the host (Wall et al., 2014).

The amino acid tryptophan, an essential amino acid, which must be obtained from diet and which is also synthesised by gut bacteria, is transported in the blood stream to the CNS, where it is used to synthesise serotonin. Approximately 5% of the body’s serotonin is synthesised in the brain (Kim & Camilleri, 2000). Serotonin’s effects in the brain are both behavioural, such as the regulation of emotion, visceral pain, appetite, stress response, addiction, and sexuality, and neurological, such as circadian rhythm, motor control, body temperature, CNS vascular tone, and cerebellar regulation (O’Mahony, Clarke, Borre, Dinan, & Cryan, 2015). Some serotonin is also used by platelets in haemodynamics, and in the gastrointestinal tract, where 90% of serotonin resides (Keszthelyi, Troost, & Masclee, 2009). This neurotransmitter exerts its effects on gastric secretion, pancreatic secretion, gastrointestinal motility and colonic tone (O’Mahony et al., 2015). Serotonin is not able to cross the blood–brain barrier due to its molecular size, therefore any mood-related effects can most likely be attributed to the serotonin produced in the brain (Birdsall, 1998). Nevertheless, given the gut’s substantial serotonin stores located close to the vagal nerve pathways that link directly to the brain’s affective control centres (Crowell, 2004), the serotonin synthesised in the gut may plausibly affect the brain’s emotional centres, although this has not as yet been determined.

This has been an excerpt from The Gut As A Key Player In Neuroscience. To download the full article, and more excellent material for the psychotherapist, please subscribe to our monthly magazine.