The Good, Bad, and Ugly of the Body’s Stress Response System

The Good, Bad, and Ugly of the Body’s Stress Response System 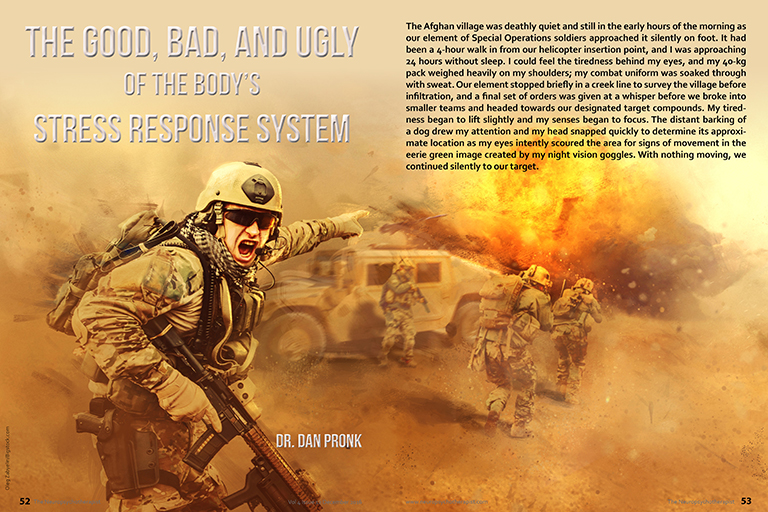 The Afghan village was deathly quiet and still in the early hours of the morning as our element of Special Operations soldiers approached it silently on foot. It had been a 4-hour walk in from our helicopter insertion point, and I was approaching 24 hours without sleep. I could feel the tiredness behind my eyes, and my 40-kg pack weighed heavily on my shoulders; my combat uniform was soaked through with sweat. Our element stopped briefly in a creek line to survey the village before infiltration, and a final set of orders was given at a whisper before we broke into smaller teams and headed towards our designated target compounds. My tiredness began to lift slightly and my senses began to focus. The distant barking of a dog drew my attention and my head snapped quickly to determine its approximate location as my eyes intently scoured the area for signs of movement in the eerie green image created by my night vision goggles. With nothing moving, we continued silently to our target.

Less than 100 metres from our target compound, my attention was suddenly drawn to a blinding flash of light to my immediate left that temporarily caused my goggles to whiteout and fail. A fraction of a second later a deafening explosion ripped through the silence of the morning, causing every member of my team to stop dead in their tracks and focus on the fireball erupting from the blast. The improvised explosive device (IED) risk for the target had been assessed as extreme,  and it was likely that one of our teams had just hit one. I felt a surge of warm adrenaline initiate in the middle of my back and proceed to cloak my shoulders and head, causing my scalp to tingle and goose bumps to form on my arms. My heart began to thump hard in my chest and I felt invigorated; my pack, which had weighed heavily on my shoulders during insertion, now seemed weightless, and my vision and hearing sharpened; every fibre of my body stood ready for whatever would come next.
Seconds later, the village erupted with gunfire, galvanising my team into action. We sprinted to the nearest mud brick compound, our lead operator effortlessly kicking the door off its hinges without breaking stride. Upon entry, we fell spontaneously into our room clearance drills then, once the compound was secured, we positioned ourselves to join the fight. The chemicals surging through my veins made me once again feel high on my drug of choice—combat.
The startle, or stress response, that I experienced was the result of a complex series of events within the body that prime us to respond in a threat situation. This response is not unique to humans, and its origins are thought to date back tens of millions of years to the most basic forms of life on earth. The stress response evolved out of necessity for basic life forms to be able to identify threat from predators and ideally to avoid becoming prey. The fundamentals of the response system are therefore hardwired into the most primitive parts of the human brain and can be triggered in fractions of a second by certain stimuli.
The stress response is initially triggered by a threat stimulus of some description—usually a loud noise, sharp pain, or a visual stimulus that is considered threatening. This stimulus is registered by the sensory cortex and sensory thalamus of the brain that, in a fraction of a second, transmits the signal to the hub of the stress response, the amygdala (Lang, Bradley, & Cuthbert, 1998; Milad, Rauch, Pitman, & Quirk, 2006). Once stimulated, the amygdala rapidly disperses signals to several other centres of the brain to simultaneously activate the physiological responses we associate with fear.
The initial response to a threat stimulus is known as a startle reflex, which causes us to immediately freeze in place, as well as involuntarily blink and become hyperalert (Davis, 1998; Lang, Davis, & Ohman, 2000). When looking at the evolutionary significance of this startle response, movement is a key factor that allows a predator to identify prey, so by freezing at the first sign of threat, the potential prey minimises its chances of being detected. The rapid blinking of the eyes is thought to be a protective reflex to shield the eyes from any immediate danger that may be associated with the threat stimulus.
Whilst still frozen in the startle reflex phase of the stress response, the amygdala furiously fires signals to another area of the brain known as the hypothalamus, the area responsible for regulating the hormones of the body’s sympathetic nervous system. These hormones stimulate what is commonly known as the fight-or-flight response and include noradrenaline, dopamine, and serotonin, amongst others (Stockhorst & Antov, 2016). The physiological effects of these hormones occur within seconds of a stress stimulus and act to prime the body for action. The pupils of the eyes dilate to let in more light and sharpen visual acuity; breathing and heart rate increase to pump more oxygenated blood around the system; blood vessels in the gut constrict, and blood is shunted to the muscles in anticipation of use; sweat glands are stimulated to aid in cooling the body; and a protein called renin is released from the kidneys, tightening the body’s blood vessels and boosting blood pressure. The body is then in an optimal state to stay and fight the threat, if required, or to turn and flee from it at maximum speed. This initial stress response, which happens within seconds, is followed within minutes by the release of a second wave of chemicals (Milad, 2006). These include the hormone glucagon, which liberates stored sugar reserves from within the body, increasing blood-sugar levels in order to provide a source of fuel to fight or flee. Also released in this second phase are the body’s natural opiates that cause the euphoric feeling associated with extreme sports—and keep the so-called adrenaline junkies going back for one more base jump.
It has been shown that a large percentage of humans, being diurnal (awake during the day), have a heightened state of anxiety and increased stress response to stimuli in the dark (Davis, 1998). This explains why many of us fear the dark, and why events that otherwise wouldn’t startle us during the day do so at night. It also explains why horror movies seem far scarier when seen at night than they do during the day. Horror movie producers also use the stress response to their advantage by playing sudden loud noises in synchrony with scary scenes that triggers an acoustic startle reflex and a subsequent stress response in viewers (Davis, 1998).

This has been an excerpt from The Good, Bad, and Ugly of the Body's Stress Response System. To read the full article, and more excellent material for the psychotherapist, please subscribe to our monthly magazine.