The Future of Mental Health Screening

The future of mental health screening: 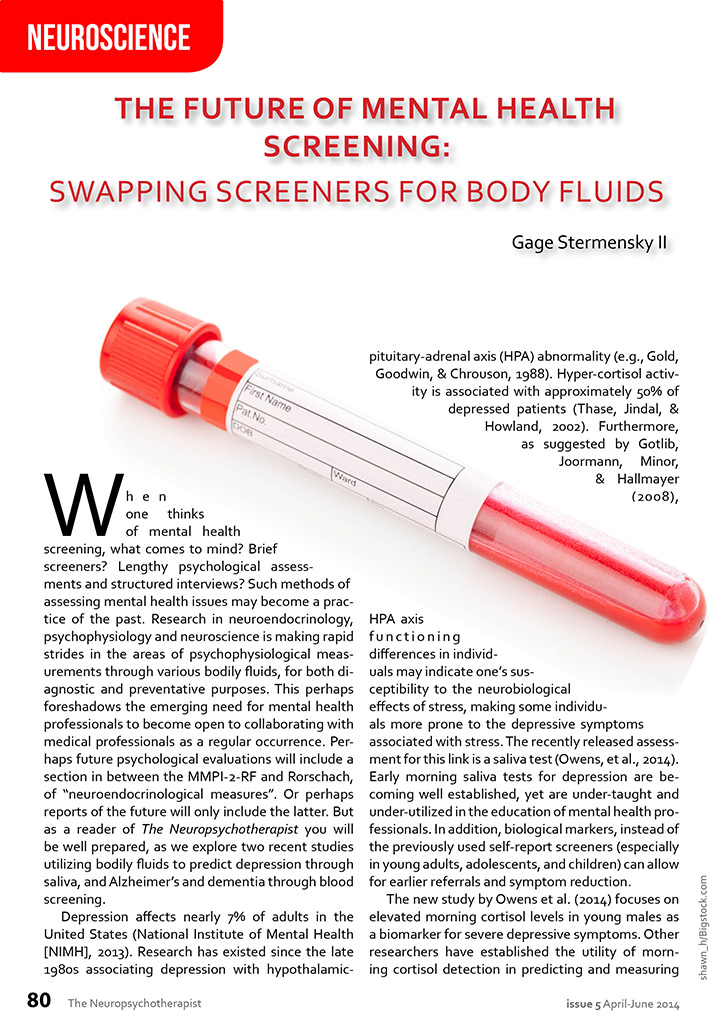 When one thinks of mental health screening, what comes to mind? Brief screeners? Lengthy psychological assessments and structured interviews? Such methods of assessing mental health issues may become a practice of the past. Research in neuroendocrinology, psychophysiology and neuroscience is making rapid strides in the areas of psychophysiological measurements through various bodily fluids, for both diagnostic and preventative purposes. This perhaps foreshadows the emerging need for mental health professionals to become open to collaborating with medical professionals as a regular occurrence. Perhaps future psychological evaluations will include a section in between the MMPI-2-RF and Rorschach, of “neuroendocrinological measures”. Or perhaps reports of the future will only include the latter. But as a reader of The Neuropsychotherapist you will be well prepared, as we explore two recent studies utilizing bodily fluids to predict depression through saliva, and Alzheimer’s and dementia through blood screening.

Depression affects nearly 7% of adults in the United States (National Institute of Mental Health [NIMH], 2013). Research has existed since the late 1980s associating depression with hypothalamic-pituitary-adrenal axis (HPA) abnormality (e.g., Gold, Goodwin, & Chrouson, 1988). Hyper-cortisol activity is associated with approximately 50% of depressed patients (Thase, Jindal, & Howland, 2002). Furthermore, as suggested by Gotlib, Joormann, Minor, & Hallmayer (2008), HPA axis functioning differences in individuals may indicate one’s susceptibility to the neurobiological effects of stress, making some individuals more prone to the depressive symptoms associated with stress. The recently released assessment for this link is a saliva test (Owens, et al., 2014). Early morning saliva tests for depression are becoming well established, yet are under-taught and under-utilized in the education of mental health professionals. In addition, biological markers, instead of the previously used self-report screeners (especially in young adults, adolescents, and children) can allow for earlier referrals and symptom reduction.

The new study by Owens et al. (2014) focuses on elevated morning cortisol levels in young males as a biomarker for severe depressive symptoms. Other researchers have established the utility of morning cortisol detection in predicting and measuring depression. According to Dougherty et al. (2009) anhedonia and early morning depression serve as a predictor for later life major depressive disorder episodes. In addition, maternal history of depression and child temperament were identified as potential predictors of depression (Dougherty et al., 2009). The two systems activated by stress in the brain are the autonomic nervous system (ANS) and the HPA axis. Following activation, the current stress and past stressful events are compared, creating stimulation, awareness, and the perceived need to respond. The first sub-cortical structures activated are the amygdala and hypothalamus, and eventually other areas of the brain and spinal cord via neurotransmission (Schwabe, Wolf, & Oitzl, 2010).

The major areas of the brain affected by stress are the prefrontal cortex, amygdala, hippocampus, HPA axis, and sympathetic-adrenal-medullary (SAM) system. One of the primary biological indicators of depression is elevated cortisol levels in the blood. Experts in the field have proposed that serotonin, the neurotransmitter most commonly associated with depression, is not, in fact, the cause of depression (Schatzberg et al., 2014). Instead, it has been argued that depression is primarily caused by neurochemical and anatomical changes related to the stress response (Schatzberg et al., 2014). Throughout mental health and counseling training programs, however, the “go to” assessments are often the Beck Depression Inventory, PHQ-9, or even scales on longer assessment instruments (MMPI-2, MMPI-2-RF, etc.). With the new, medically based assessments of depression, will mental health screening become based upon bodily fluid screening and blood draws? Instead of acquiring multiple credentials in various mental health disciplines, would investment of time and energy in phlebotomy or as a medical technician assure security in the mental health assessment market? More and more disorders are identifiable through simple, inexpensive tests, and appear to be the future of mental health assessment.

Another area of mental health assessment through bodily fluid screening recently demonstrated at nearly 90% accuracy covers dementia and Alzheimer’s disease. Described by the World Health Organization (WHO) as a public health priority, Alzheimer’s and dementia effect over 35.6 million people worldwide, and is expected to more than double by 2030, and triple by 2050 (WHO, 2012). In a recent study, Mapstone et al. (2014) report the ability to detect Alzheimer’s disease through plasma phospholipids with up to 90% accuracy. The researchers developed a ten lipids panel as a biomarker panel capable of detecting neurodegeneration (Mapstone et al., 2014). The researchers observed 500 participants (all aged 70 or older) over a five-year period. Assessment of mental functioning (such as memory) was completed along with blood tests. Of the total sample, 53 displayed Alzheimer’s or mild cognitive impairment. The blood of these individuals was compared using mass spectrometry to determine chemical signatures that demonstrate deterioration of cell membrane integrity. While 10% admittedly remain unaccounted for, will similar studies surface for other mental health disorders? Will this become the future of the field? How will this change training of mental health professionals and counselors? This is truly an exciting time to be in the mental health field.