The Fear of New Technology 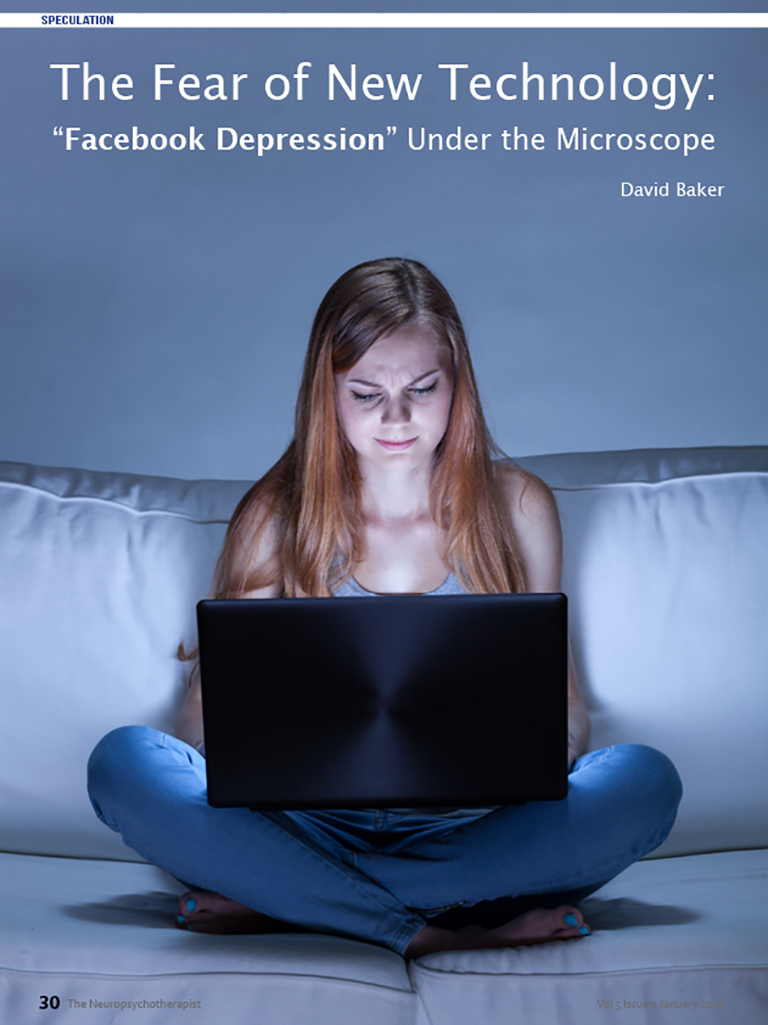 In 16th-century Europe, a strange new psychiatric disorder emerged: people started to believe that they were made of glass. A famous early sufferer of the “glass delusion” was King Charles VI of France who, following a series of stressful events, began to fear that any reckless movements by himself or others in his vicinity would cause him to shatter, like a pane of fragile glass (Speak, 1990). Similar accounts were widespread and well-known during the 15th and 16th centuries, appearing in novels and poems of the time, and the condition was highlighted by the philosopher René Descartes (1641/1996) as an example of mental illness. Following this relatively brief period, however, accounts all but disappeared. Professor Edward Shorter, a historian of psychiatry from the University of Toronto, attributed the phenomenon to the fact that it occurred around the time when clear glass was a relatively new material, and as such provided a fertile ground for the inventive unconscious mind to hang its delusions (“The people who think they are made of glass”, 2015).
Fast-forward 500 years or so, and fears around new technologies remain strong, albeit taking different and arguably more advanced forms. Towards the end of the 20th century and start of the 21st century, anxieties emerged in relation to the rapid spread of microcomputers, which have become increasingly ubiquitous in our lives since the 1980s. In more recent times, one of the most fiercely debated of these concerns relates to the impact of computer video games on the brains and behaviours of children, with critics and mainstream media outlets citing fears of inactivity, addiction, underdevelopment, and violence (e.g., Collins, 2011; Manger, 2015; Reilly, 2014), although in many cases their assertions are underpinned by an uncertain and often contradictory evidence base.
Concerns relating to new technology are clearly nothing new, and it has been argued that fears of such advancements may arise from a lack of meaning surrounding their evolution, with frightening stories filling the gap and becoming a way of providing this meaningful context (Mordini, 2007). In recent years, the Internet—propelled by the widespread availability of powerful smartphones and tablets—has arguably become the most pervasive technology to reach the lives of everyday people. Perhaps the most significant advancement in this field has been that of online social networking sites, the most popular of which include Facebook, Twitter, and Instagram. The former has had such widespread appeal that its founder, Mark Zuckerberg, now claims that his company has over 1.7 billion monthly active users (Facebook, 2016). That’s around 1 in every 4 people.
It is perhaps no surprise, then, that there are growing concerns that spending long periods of time using sites like Facebook may be affecting our mental health. In light of this, in 2011, the American Academy of Pediatrics coined the phrase “Facebook Depression” to describe a phenomenon that develops “when preteens and teens spend a great deal of time on social media sites such as Facebook and then begin to exhibit classic symptoms of depression” (O’Keeffe & Clarke–Pearson, 2011, p. 802). Several studies have observed a significant association between experiences of depression and the personal use of technology such as addictive Internet use for nonacademic or nonemployment purposes (Young & Rogers, 1998), the use of information communication technology including online chat, email, and short message service (Thomée, Eklöf, Gustafsson, Nilsson, & Hagberg, 2007), and the use of mobile phones (Thomée, Härenstam, & Hagberg, 2011).
So, should we worry about the psychological impact that using social networking sites like Facebook can have on us, our friends, and our families? Are we really fragile to the dangers of an unknown online world, as it may seem, or is this apparent susceptibility no more than a modern-day glass delusion? To answer this question, Baker and Algorta (2016) examined all the available quantitative research into the relationship between the use of online social networking sites and depression. This review, the only one of its type to date, included 30 predominantly cross-sectional studies, deriving data from over 33,000 participants in 14 countries.
The findings of this review suggest there exists a complex combination of important factors in the relationship between depression and social networking (Baker & Algorta, 2016). Whilst some studies found a positive correlation between online social networking and depression (Giota & Kleftaras, 2013; Labrague, 2014; Lin et al., 2015; Pantic et al., 2012; Wright et al., 2013), effect sizes were relatively small, and the overall trend in research suggests that simply using social networking sites is unlikely to make us feel depressed (Afsar, 2013; Banjanin, Banjanin, Dimitrijevic, & Pantic, 2015; Datu, Valdez, & Datu, 2012; Jelenchick, Eikhoff, & Moreno, 2013; Masedu et al., 2014; Morin–Major et al., 2016). Longer time spent online, it appears, does not necessarily equal greater depression.

On the other hand, there is evidence that what we do while we are online can have a significant impact on how likely we are to become depressed. It is not Facebook in itself that makes us feel down, but rather how we use it: with so many people using the site, it is hard to avoid reaching the conclusion that someone somewhere is having a better time than us. As humans we are primed to make social comparisons (Festinger, 1954), but whereas once we would have compared ourselves with the neighbours, we can now compare ourselves with millions of other people across the globe from the comfort of our living rooms, with just the swipe of a finger. Research suggests that men may be more likely to engage in social comparison online (Steers, Wickham, & Acitelli, 2014), and if we compare ourselves to others in a way that leads to feelings of envy, we are more likely to feel depressed (Tandoc, Ferucci, & Duffy, 2015). Feeling depressed may also lead us to engage in greater social comparison (Feinstein et al., 2013; Steers, Wickham, & Acitelli, 2014), so we could find ourselves in a vicious cycle.

This has been an excerpt from The Fear of New Technology:  “Facebook Depression” Under the Microscope. To read the full article, and more excellent material for the psychotherapist, please subscribe to our monthly magazine.