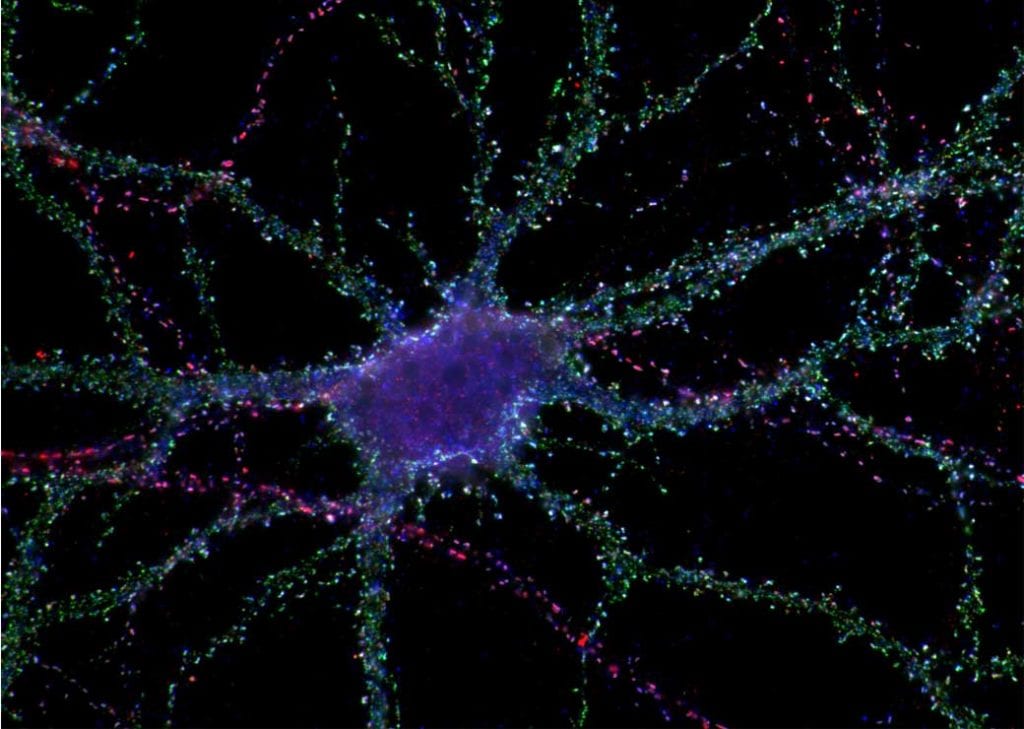 © Staining of receptors and pit for endocytosis, the process by which molecules are transported inside a cell. Jennifer PETERSEN/Daniel CHOQUET/IINS/CNRS Photo library.

Researchers in Bordeaux recently discovered a new mechanism for storing information in synapses and a means of controlling the storage process. The breakthrough moves science closer to unveiling the mystery of the molecular mechanisms of memory and learning processes. The research, carried out primarily by researchers at the Interdisciplinary Institute for Neurosciences (CNRS/Université de Bordeaux) and the Bordeaux Imaging Center (CNRS/Université de Bordeaux/Inserm), appears in the 13 september 2017 edition of Nature.

Communication between neurons passes through over one million billion synapses, tiny structures the tenth of the width of a single hair, in an extremely complex process.  Synaptic plasticity – the ability of synapses to adapt in response to neuronal activity – was discovered nearly 50 years ago, leading the scientific community to identify it as a vital functional component of memorisation and learning.

Neurotransmitter receptors – found at the synapse level – play a key role in the transmission of nerve messages. A few years ago, the team of researchers in Bordeaux discovered that neurotransmitter receptors were not immobile as thought previously, but in a constant state of agitation. They posited that controlling this agitation through neuronal activity could modulate the effectiveness of synaptic transmission by regulating the number of receptors present at a given time in a synapse.

The new research has taken the two teams further in their understanding of the basic mechanisms behind how information is stored in the brain. Scientists combined techniques based on chemistry, electrophysiology and high-resolution imaging to develop a new method to immobilise receptors at synaptic sites. This method successfully stops receptor movement, making it possible to study the impact of the immobilisation on brain activity and learning ability. It provides evidence that receptor movement is essential to synaptic plasticity as a response to intense neuronal activity.

The discovery offers new perspectives on controlling memory. The memorisation protocol tested here activates a particular area of the brain: the hippocampus. The next step for researchers is to determine if the mechanism discovered can also be applied to other forms of learning and, by extension, to other areas of the brain. From a technical standpoint, it will be possible to develop new, reversible and light-sensitive methods of immobilizing receptors in order to better control the process.