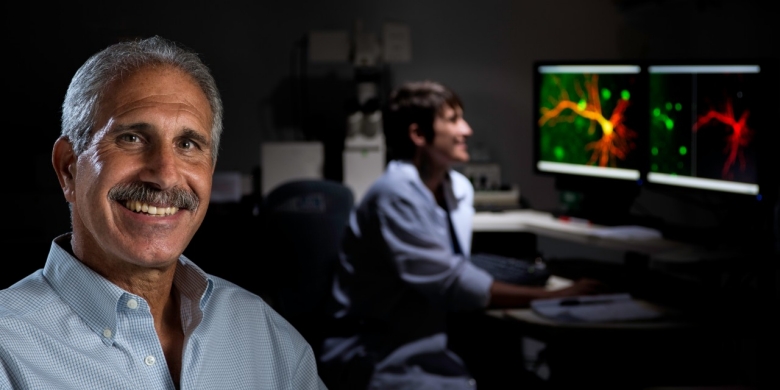 Dr. Robert Malenka and his colleagues identified some of the brain circuitry that provides pleasurable responses to socialization © Steve Fisch

Why is it so much fun to hang out with our friends? Why are some people so sociable while others are loners or seemingly outright allergic to interactions with others?

A study by researchers at the Stanford University School of Medicine begins to provide an answer, pinpointing places and processes in the brain that promote socialization by providing pleasurable sensations when it occurs. The findings point to potential ways of helping people, such as those with autism or schizophrenia, who can be painfully averse to socializing.

The study details the role of a substance called oxytocin in fostering and maintaining sociability. The senior author is Robert Malenka, MD, PhD, professor and associate chair of psychiatry and behavioral science. The lead author is former postdoctoral scholar Lin Hung, PhD.

“Our study reveals new insights about the brain circuitry behind social reward, the positive experience you often get when you run into an old friend or meet somebody you like,” said Malenka, who has focused much of his research on an assembly of interacting nerve tracts in the brain collectively known as the reward circuitry.

“The reward circuitry is crucial to our survival because it rewards us for doing things that have, during our evolutionary history, tended to enhance our survival, our reproduction and the survival of our resulting offspring,” said Malenka, who holds the Nancy Friend Pritzker Professorship in Psychiatry and the Behavioral Sciences. “It tells us what’s good by making us feel good. When you’re hungry, food tastes great. When you’re thirsty, water is refreshing. Sex is great pretty much most of the time. Hanging out with your friends confers a survival advantage, too, by decreasing your chances of getting eaten by predators, increasing your chances of finding a mate and maybe helping you learn where food and water are.”

Because the reward system is so critical, it’s been carefully conserved over evolution and in many respects operates just the same way in mice as it does in humans, making mice good experimental models for studying it.

Far and away the most important component of the brain’s reward circuitry, Malenka said, is a nerve tract that runs from a structure deep in the brain called the ventral tegmental area to a midbrain structure called the nucleus accumbens. The ventral tegmental area houses a cluster of nerve cells, or neurons, whose projections to the nucleus accumbens secrete a substance called dopamine, altering neuronal activity in this region. Dopamine release in the nucleus accumbens can produce a wave of pleasure, telling the brain that the event going on is helpful for survival. Dopamine release in this region, and subsequent changes in activity there and in downstream neurons, also prime the brain to remember the events and the behaviors leading up to the chemical’s release.

This tract, so famous for reinforcing survival-enhancing behaviors such as eating, drinking and mating, has been infamously implicated in our vulnerability to drug addiction—a survival-threatening outcome resulting from drugs’ ability to inappropriately stimulate dopamine secretion in the tract. But understanding exactly how and under what natural conditions the firing of its dopamine-secreting nerves gets tripped off is a work in progress.

It turns out that another chemical—oxytocin—is pulling the strings.

Oxytocin is sometimes called the “love hormone” because it’s thought to be involved in falling in love, mother-child bonding and female sexual arousal, as well as lifetime pair-bonding of sexual mates among some species. The chief source of oxytocin in the brain is the paraventricular nucleus, which resides in a deep-brain structure called the hypothalamus that serves as a manifold master regulator of body temperature, hunger, thirst, sleep, emotional reactions and more.

Research over the last 20 to 40 years has suggested that oxytocin plays a role in promoting not just sexual or nurturing behavior, but also sociability. A 2013 study co-authored by Malenka showed that oxytocin was essential to reinforcing friendly, social behavior in mice. But how that occurred was unclear, as the paraventricular nucleus sends oxytocin-squirting nerve tracts to many areas throughout the brain.

So Malenka and his colleagues designed experiments to nail down oxytocin’s role in social behavior. They confirmed that a tract running from the paraventricular nucleus to the ventral tegmental area carried oxytocin. They showed, for the first time, that activity in this tract’s oxytocin-secreting neurons jumped during mice’s social interactions and that this neuronal activity was required for their normal social behavior. Disrupting this activity inhibited sociability but didn’t impair the mice’s movement or their appetite for pleasurable drugs, such as cocaine.

The findings should help translational researchers develop medications for individuals with neurological disorders, such as autism, depression and schizophrenia, whose conditions compromise their ability to experience pleasure from connecting with other people, Malenka said.

But he also voiced a desire for more widespread applications of the research. “With so much hatred and anger in the world,” he said, “what could possibly be more important than understanding the mechanisms in the brain that make us want to be friendly with other people?”