Research published in Nature could transform structural biology, lead to new treatments for epilepsy
By Erik Robinson May 12, 2021 Portland, Oregon 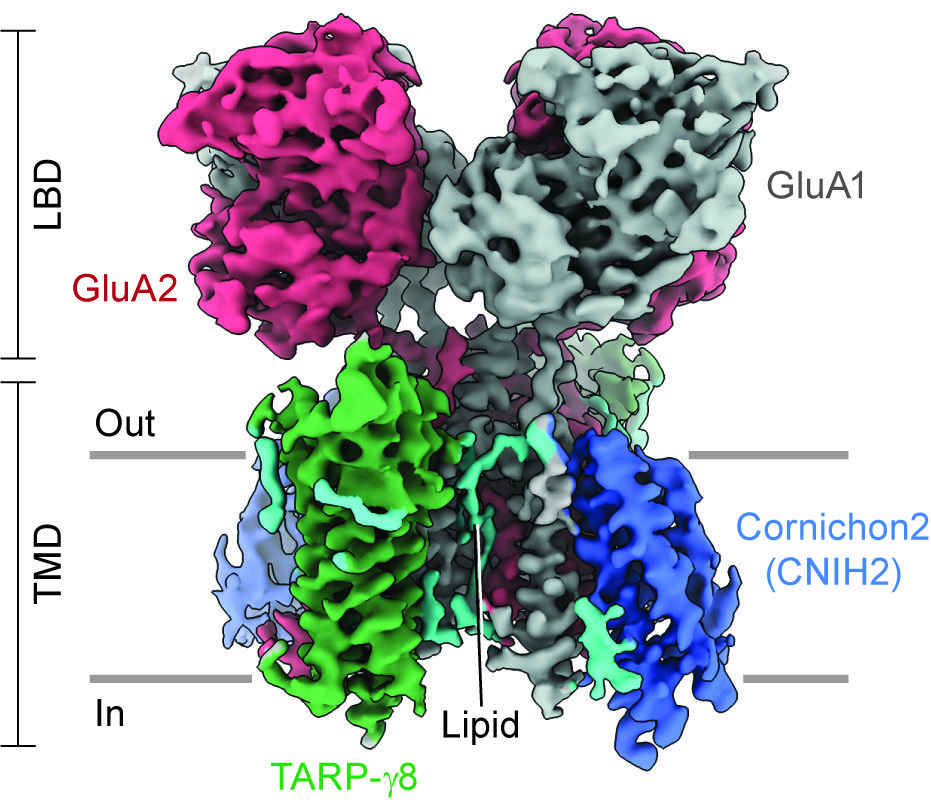 Three-dimensional reconstruction of the hippocampal glutamate receptor ion channels (AMPARs), viewed parallel to the membrane. Auxiliary proteins TARP-8 and CNIH2 surround the receptor transmembrane domain (TMD) at distinct binding sites, poised to modulate receptor activity. The LBD is the region of the receptor that binds glutamate while the TMD forms the transmembrane, ion conducting pore. (OHSU)

Scientists have for the first time revealed the structure surrounding important receptors in the brain’s hippocampus, the seat of memory and learning.

The study, carried out at Oregon Health & Science University, published today in the journal Nature.

The findings may be immediately useful in drug development for conditions such as epilepsy, said senior author Eric Gouaux, Ph.D., senior scientist in the OHSU Vollum Institute, Jennifer and Bernard Lacroute Endowed Chair in Neuroscience Research and an Investigator with the Howard Hughes Medical Institute.

“Epilepsy or seizure disorders can have many causes,” he said. “If one knows the underlying cause for a particular person’s seizure activity, then you may be able to develop small molecules to modulate that activity.”

Working with a mouse model, the OHSU researchers made the breakthrough by developing monoclonal antibodies to isolate the receptor and the complex of subunits surrounding it. They then imaged the entire collection using state-of-the-art cryo-electron microscopy at the Pacific Northwest Cryo-EM Center, housed in OHSU’s South Waterfront campus in Portland.

Previously, scientists had to rely on mimicking the actual receptors by artificially engineering receptors by combining DNA segments in tissue culture. However, that technique has obvious shortcomings.

“It doesn’t work perfectly because the real receptors are surrounded by a constellation of additional, sometimes previously unknown, subunits,” Gouaux said.

The new monoclonal antibody reagents, also developed at OHSU, enabled scientists to isolate actual glutamate receptors from the brain tissue of mice.  These receptors form permeable ion channels that carry signals between cells in the nervous system. Researchers then were able to image the samples in near-atomic detail using cryo-EM, which allowed them to capture the entire assemblage of three types of glutamate receptors along with their auxiliary subunits.

“Previously, it’s been impossible to do this because we had no good way to isolate molecules and no way to see what they looked like,” Gouaux said. “So this is a super exciting development.”

Cryo-electron microscopy is a state-of-the-art technique that produces extremely detailed three-dimensional images of cells, down to near-atomic detail.