Study confirms beauty is in the eye of the beer holder 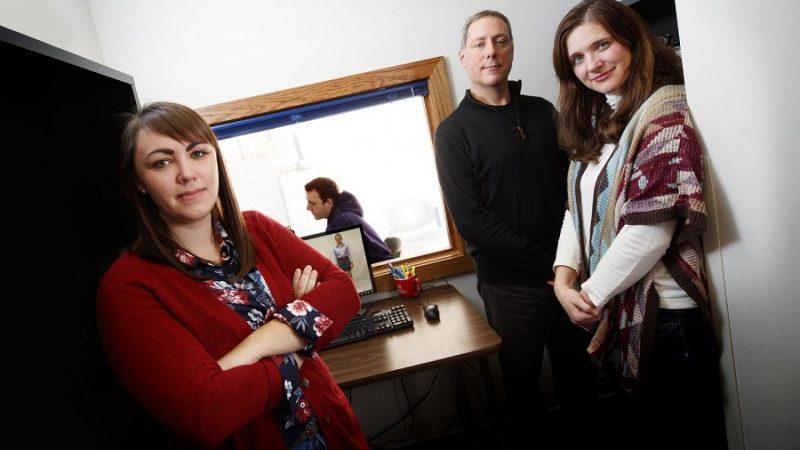 Abbey Riemer, graduate student in Social Psychology, left, has published research: Beauty is in the Eye of the Beer Holder: An Initial Investigation of the Effects of Alcohol, Attractiveness, Warmth, and Competence on the Objectifying Gaze in Men She is photographed with Professors David DiLillo and Sarah Gervais in a Burnett Hall eye tracking lab. Credit: Craig Chandler | University Communication

University of Nebraska-Lincoln psychology researchers used eye-tracking technology to investigate alcohol’s influence on when college-age men drop their gaze from a woman’s face to other parts of her anatomy.

In a newly published study, they confirmed that intoxicated participants do spend significantly less time examining women’s faces compared to sober participants. Their study also showed that intoxicated men were more likely to “check out” the body parts of women they perceived as unfriendly or unintelligent.

“Intoxicated men in the study were less likely to objectify women they perceived as warm and competent and those who were of average attractiveness,” said Abbey Riemer, a doctoral student in psychology and lead author of the study. “Perhaps this is because warmth and competence are humanizing attributes that create a buffer against objectification.”

Although the study was small, involving 49 college-age men, it could offer insights on how to prevent sexually aggressive behavior, particularly in situations where alcohol is being used, said Riemer and her co-authors, Sarah Gervais and David DiLillo, psychology faculty at the University of Nebraska-Lincoln. Party culture often is an element of sexual misconduct issues faced on college campuses – and alcohol use may well have been a factor in many of the sexual harassment and sexual assault incidents recently brought to light as a result of the “Me, Too” social media movement.

The study tested how “alcohol myopia” – a theory that intoxication limits the amount of information people can process, narrowing their perceptions to the most provoking stimuli – interrelates with sexual objectification.

Study participants ranged in age from 21 to 27 years old. More than three-fourths were white. Upon arrival at the laboratory, some participants were randomly assigned to drink a mixture of orange juice and grain alcohol until they reached legal intoxication levels. Other participants were given drinks that smelled and tasted of alcohol, but contained a trivial amount of liquor – too little to make them drunk.

The researchers used eye-tracking equipment to measure whether participants looked at faces or chests or waists as they viewed photographs of 80 college-age women dressed to go out to a party or a bar. The photos previously had been screened by more than 300 men and women who rated the images based upon whether the women appeared attractive, warm or competent. Each image was categorized by high, average and low levels of each attribute.

The researchers stressed that the participants’ responses were based purely upon their perceptions of images — not actual traits or behavior by the women pictured.

“We need to be clear – this is all happening in men’s minds,” Riemer said.

When participants were asked to focus on the pictured women’s appearance, they were more likely to use what researchers call an “objectifying gaze” – spending more time looking at sexual body parts and less time looking at the face.

The study provides objective evidence of previous findings by Gervais and DiLillo, who found that men self-reported that they were more likely to look at women as sexual objects after drinking.

But Gervais said the new study creates a more nuanced view of the notion of “beer goggles.” It wasn’t that participants found more women to be attractive after consuming alcohol.