UCLA-led research has found that students in a college mathematics course experienced a phenomenon similar to repression, the psychological process in which people forget emotional or traumatic events to protect themselves.

In a study published online by the Journal of Educational Psychology, the researchers found that the students who forgot the most content from the class were those who reported a high level of stress during the course. But, paradoxically, the study also found that the strong relationship between stress level and the tendency to forget course material was most prevalent among the students who are most confident in their own mathematical abilities. 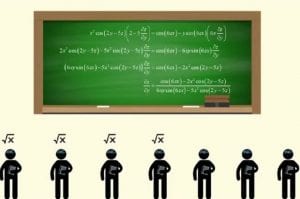 Among students who most considered themselves “math people,” those who experienced a lot of stress performed measurably worse on a follow-up exam than those with lower stress levels.

The phenomenon, which the authors call “motivated forgetting,” may occur because students are subconsciously protecting their own self-image as excellent mathematicians, said Gerardo Ramirez, a UCLA assistant professor of psychology and the study’s lead author.

For the study, researchers analyzed 117 undergraduates in an advanced calculus course at UCLA. The students generally consider themselves to be strong in mathematics and plan to pursue careers that rely on high-level mathematical skills, so the logical assumption would be that they would be likely to remember most of the material from the course.

Researchers asked students a series of questions at the start of the course, including having them assess to what extent they see themselves as “math people.” Each week throughout the course, students were asked to gauge how stressful they thought the course was. Then, the study’s authors examined students’ performance on the course’s final exam and on another similar test two weeks later. On average, students’ grades were 21 percent lower on the follow-up.

Among students who strongly considered themselves to be “math people,” those who experienced a lot of stress performed measurably worse on the follow-up exam than those whose stress levels were lower.

The results were striking because, in the cases of the students whose stress levels were highest, test scores dropped by as much as a full letter grade — from an A-minus to a B-minus, for example. But, according to Ramirez, the findings make sense from a psychological perspective.

“Students who found the course very stressful and difficult might have given in to the motivation to forget as a way to protect their identity as being good at math,” he said. “We tend to forget unpleasant experiences and memories that threaten our self-image as a way to preserve our psychological well-being. And ‘math people’ whose identity is threatened by their previous stressful course experience may actively work to forget what they learned.”

The idea that people are motivated to forget unpleasant experiences — activating a sort of “psychological immune system” — goes back to Sigmund and Anna Freud, the pioneers of psychoanalysis, Ramirez said.

The students who think of themselves as excellent at math and felt high levels of stress were also more likely to report they avoided thinking about the course after it ended more than other students did.

Previous studies by other researchers seem to support the concept of motivated forgetting. For example, a 2011 Harvard University study found that when people were asked to memorize an “honor code” and then pay themselves for solving a series of problems, those who cheated and overpaid themselves remembered less of the honor code at the end of the experiment than those who did not cheat.

“Motivated forgetting, or giving in to the desire to forget what we find threatening, is a defense mechanism people use against threats to the way they like to depict themselves,” Ramirez said. “The students are highly motivated to do well and can’t escape during the course, but as soon as they take their final exam, they can give in to their desire to forget and try to suppress the information.”

Ramirez said there are steps teachers can take to help students retain information. Some of them:

The study’s co-authors are Ian McDonough of the University of Alabama, and Ling Jin, a former UCLA graduate student.