Strait is the Gate…to Mathematics

Strait is the Gate…to Mathematics:

On the Multiple Components of Mathematical Difficulties 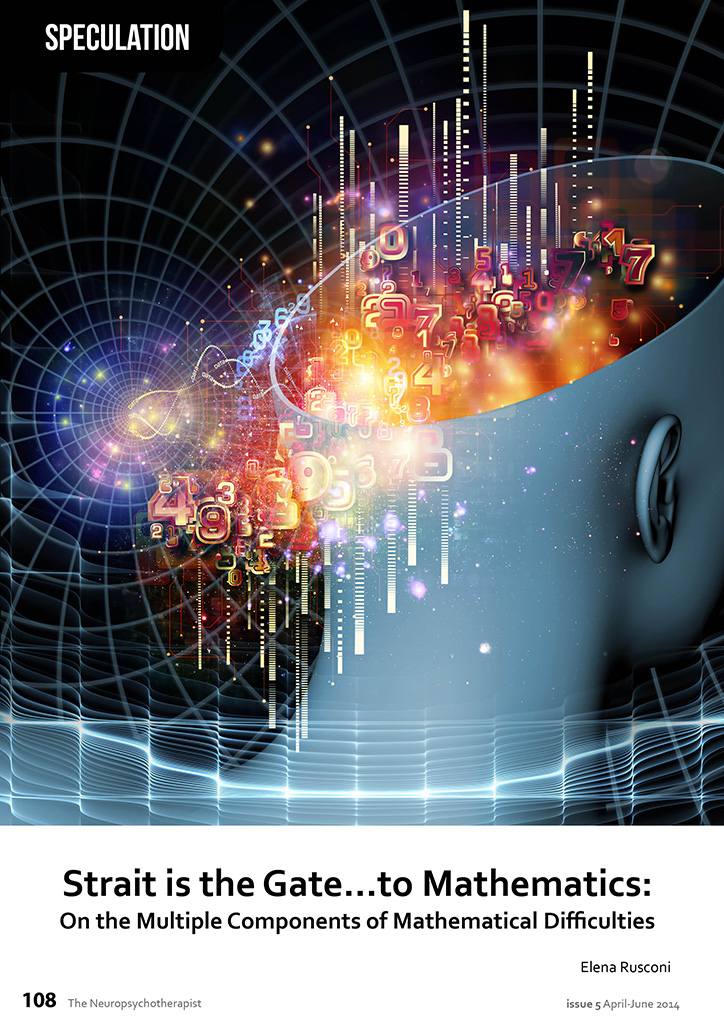 Complex mathematical formulae may trigger emotional and neural responses similar to the greatest works of art (Zeki et al., 2014). Yet whereas the greatest art appeals to the vast majority, mathematics does not.

That the abstract beauty of mathematics can evoke in the expert the same—if not higher—form of awe and aesthetic emotion as the artistic perfection of a great sculpture was already known in Classical Greece (see, e.g., Plato’s Timaeus). A recent study claims that the functional brain correlates of the aesthetic emotion, felt by those who can appreciate mathematical beauty, do not qualitatively differ from the functional brain correlates of the aesthetic emotion evoked by figurative and musical art. Nevertheless, while the latter can be achieved without specific training or expertise, the former is less accessible and will never be experienced in a lifetime by the majority of us. On the contrary, many of us associate negative emotions with mathematics and struggle to acquire and/or maintain basic numeracy skills.

It has been estimated that almost half the adult population of England and Wales shows, at best, the same levels of numeracy as expected of primary school children. Such endemic low numeracy has important implications for the national economy, with an estimated overall cost of £20 billion spread across individuals, employers and government (Pro Bono Economics Report for National Numeracy, 2014). These figures do not include the indirect costs of numeracy-related unemployment and underemployment in health, wellbeing and public services (e.g., NHS and the criminal justice system). According to the Organization for Economic Co-operation and Development (OECD) Survey of Adult Skills 2013, in the UK, younger adults show no greater ability than adults approaching retirement. In the US, younger generations have lower skills than older generations. Taking into account the steady increase in years of schooling, levels of qualification, job market demands, as well as the social and economic rewards that have become available for highly skilled individuals in recent decades, the trend is puzzling.

Similar figures suggesting that average levels of numeracy lag way behind the increased reliance on STEM-related skills in developed countries have been available for several years now. They have helped create awareness and promote scientific research on mathematical cognition, mathematics education and specific learning impairments such as developmental dyscalculia, which literally means “low attainment in arithmetic”. Although originally used to indicate inability to acquire arithmetic skills, developmental dyscalculia is now thought to subtend the primary impairment of even more foundational number skills, as typically characterized by the lack of an intuitive grasp of numbers, and difficulties understanding simple numerical concepts in individuals with otherwise normal IQ (Butterworth, 2010). With an estimated prevalence of 1.3–10.3% (Devine et al., 2013), developmental dyscalculia may be one contributing factor to endemic low numeracy. However, a significant proportion of individuals equipped with intact foundational number skills appear to struggle acquiring and/or maintaining “adequate” numeracy levels. With no empirically-based normative trajectory currently available, and the range of age-appropriate variation in mathematics learning untested (Szucs & Goswami, 2013), what is considered “adequate” is largely dictated by the school curriculum. We have thus recently suggested a broad conceptualization of mathematical difficulties (MD), as a decoupling of expectation (i.e., curricular) and developmental (i.e., individual) trajectories (McLean & Rusconi, 2014). This helps account for the fact that a large proportion of individuals experiencing MD may not necessarily experience impairments at the same point on their learning trajectory and/or in relation to the same aspects of mathematics learning. It also follows that the cognitive profile of individuals with MD will crucially depend on the time of the decoupling between developmental and expected trajectories (McLean & Rusconi, 2014). Detailed knowledge of the expectation trajectory at each age will help predict what cognitive precursors (e.g., core quantity processing, visuospatial skills, embodiment, language) will be called into play by mathematics teaching, and which specific areas may become cause for concern given the unique combinations of individual strengths, predispositions and previous learning experiences. Although it is not yet possible to fully disentangle the causes of low attainment and MD at the individual level (which can range from weak foundational number skills to co-morbidity with dyslexia and ADHD through to poor teaching), several intervention tools have already been devised by cognitive neuroscientists to strengthen specific cognitive skills such as memory for arithmetic facts and visuospatial representations of numerical concepts (though only a few such tools have been made freely available; see McLean & Rusconi, 2014, pp. 11–12 for a brief overview).

Additionally, high levels of mathematical anxiety are often found in MD, and thus cognitive and emotional factors become entangled in a vicious circle via reduced motivation and active avoidance of math-related activities (e.g., Maloney & Beilock, 2012; Wu et al., in press). Mathematical anxiety is typically defined as a feeling of tension and fear that accompanies specifically math-related activities. It is negatively correlated with mathematic achievement and (likely via anticipatory feelings) leads to limited or no engagement with mathematics and with STEM-related careers, even given adequate aptitudes (e.g., Goetz et al., 2013; Wirtz et al., 2003). It has been suggested, in line with the attentional control theory (Eysenck et al., 2007), that one possible mechanism by which mathematical anxiety can negatively impact on achievement is via its cognitive component (i.e., worry). Worry would keep the working memory constantly engaged, thus reducing the resources available for mathematical problem solving and interfering with intellectual performance. Different factors may concur to generate mathematical anxiety such as previous experience of failure in mathematics, individual anxious or worrying predispositions, and both genetic and environmental factors shared with other learning outcomes. Wang et al. (in press) also report independent genetic factors that are specifically associated with mathematics problem solving. Clinical interventions for mathematical anxiety focus on the same treatments used to tackle other types of anxiety, such as breathing exercises with mindfulness meditation to focus attention and relieve tension before a mathematical test, systematic desensitization, and the provision of improved (mathematics) learning experiences (e.g., Brunyé et al., 2013; Geist, 2010; Zettle, 2003). Although these interventions may have some efficacy in reducing mathematical anxiety, they hardly scratch the surface of motivation to engage in mathematics learning and do not necessarily succeed in bringing performance to “adequate” levels, as they do not concomitantly tackle specific impairments in cognitive skills.

In conclusion, the extent of the MD phenomenon and its societal and economic implications makes an urgent case for the development of evidence-based interventions. Successfully tackling MD will require a multidisciplinary approach and a combination of individually tailored neuro-cognitive analysis and targeted clinical intervention to reduce mathematical anxiety.

Butterworth, B. (2010). Foundational numerical capacities and the origins of dyscalculia. Trends in Cognitive Sciences, 14, 534–541.

Wang, Z., Hart S. A., Kovas, Y., Lukowski, S., Soden, B., Thompson, . . . Petrill,  S. A. (in press). Who is afraid of math? Two sources of genetic variance for mathematical anxiety. Journal of Child Psychology and Psychiatry.