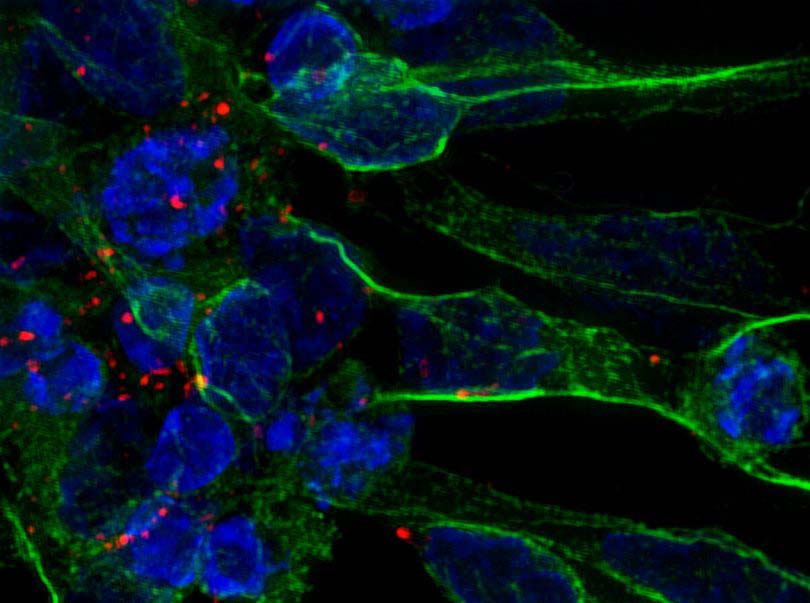 The exosomes, shown as small red punctate clusters, are taken up by neurons, shown as green cell extensions surrounding a blue nucleus © UGA

A team of researchers at the University of Georgia’s Regenerative Bioscience Center and ArunA Biomedical, a UGA startup company, have developed a new treatment for stroke that reduces brain damage and accelerates the brain’s natural healing tendencies in animal models. They published their findings in the journal Translational Stroke Research.

Fully able to cloak itself within the bloodstream, this type of regenerative EV therapy appears to be the most promising in 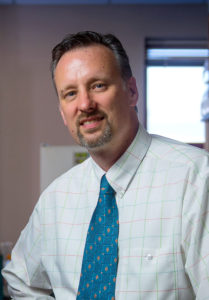 overcoming the limitations of many cell therapies­—with the ability for exosomes to carry and deliver multiple doses—as well as the ability to store and administer treatment. Small in size, the tiny tubular shape of an exosome allows EV therapy to cross barriers that cells cannot.

“This is truly exciting evidence, because exosomes provide a stealth-like characteristic, invisible even to the body’s own defenses,” said Stice, Georgia Research Alliance Eminent Scholar and D.W. Brooks Distinguished Professor in the College of Agricultural and Environmental Sciences. “When packaged with therapeutics, these treatments can actually change cell progression and improve functional recovery.”

Following the administration of AB126, the researchers used MRI scans to measure brain atrophy rates in preclinical, age-matched stroke models, which showed an approximately 35 percent decrease in the size of injury and 50 percent reduction in brain tissue loss—something not observed acutely in previous studies of exosome treatment for stroke.

Outside of rodents, the results were replicated by Franklin West, associate professor of animal and dairy science, and fellow RBC members using a porcine model of stroke—the only one of its kind in the U.S.

Named as part of the ‘stroke belt’ region, Georgia continues to exceed the national average in stroke deaths, which is the third leading cause of death in the U.S., with more than 140,000 Americans dying each year, according to the Centers for Disease Control and Prevention.

“This is truly exciting evidence, because exosomes provide a stealth-like characteristic, invisible even to the body’s own defenses.”

ArunA recently unveiled advances to the company’s proprietary neural cell platform for the production of exosome manufacturing. Today, ArunA’s manufacturing process positions the company to produce AB126 exosomes at a scale to meet early clinical demand. The company has plans to expand this initiative beyond stroke for preclinical studies in epilepsy, traumatic brain and spinal cord injuries later this year.

Researchers also plan to leverage collaborations with other institutions through the National Science Foundation Engineering Research Center for Cell Manufacturing Technologies, based at the Georgia Institute of Technology and supported by $20 million in NSF funding.

Stice, the UGA lead for CMaT, and industry partners like ArunA Biomedical, will develop tools and technologies for the consistent and low-cost production of high-quality living therapeutic cells that could revolutionize treatment for stroke, cancer, heart disease and other disorders.