Social rejection is painful and can lead to violence. A new study suggests that mindfulness may be a solution. 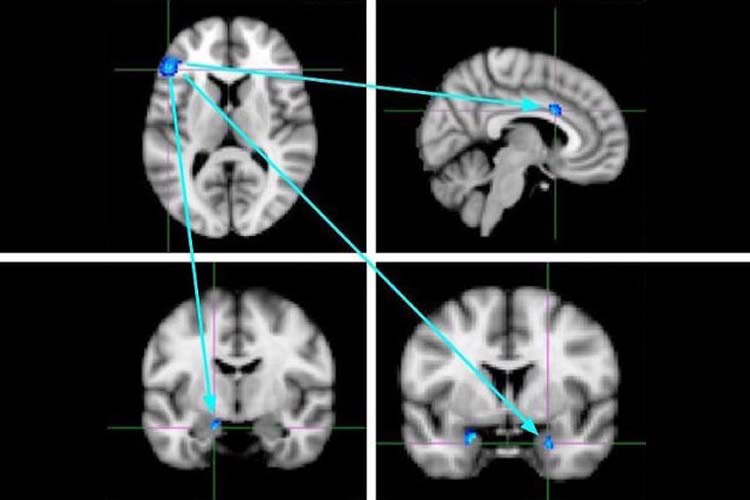 A team of researchers observed functional brain imaging in an MRI scanner while the participants were first socially accepted and then rejected. (Courtesy photo)

Researchers conducted live brain scans of people as they were being rejected by peers, and found that participants with higher levels of mindfulness more easily coped with the pain of rejection.

People who have greater levels of mindfulness — or the tendency to maintain attention on and awareness of the present moment — are better able to cope with the pain of being rejected by others, according to a new study led by a team of Virginia Commonwealth University researchers.

“Social rejection can have a number of negative outcomes both for the rejected person’s own health and well-being, as well as their interpersonal relationships,” said lead author Alexandra Martelli, a doctoral candidate in the Department of Psychology in the College of Humanities and Sciences. “Therefore it is critical that researchers find adaptive ways at responding to social rejection, and mindfulness may be one effective emotion regulation strategy.”

The study, “When Less is More: Mindfulness Predicts Adaptive Affective Responding to Rejection via Reduced Prefrontal Recruitment,” will be published in the journal Social Cognitive and Affective Neuroscience.

“Mindful people are likely using a more ‘bottom-up’ regulatory approach, which makes sense given these individuals’ tendency to focus on the organic origins of their feelings.”

They ran an experiment in which 40 undergraduate students self-reported their levels of mindfulness, and then were placed in an fMRI scanner. The researchers observed live images of the participants’ brain activity as they played a virtual ball-tossing game with what they believed to be two other partners.

For the last third of the game, the participants stopped receiving any ball tosses from the other players, mimicking the conditions of social rejection.

After the scanning session, the participants were interviewed about how distressed they were during the game. Participants with higher levels of mindfulness reported less distress from being excluded.

The link between mindfulness and reduced social distress also was seen in the brain imaging, as researchers found there was less activation in the left ventrolateral prefrontal cortex, which is known to assist in the “top-down” inhibitory regulation of both physical and social forms of pain.

The researchers also examined the communication between the ventrolateral prefrontal cortex and other brain areas during social rejection. They found that more mindful individuals showed less functional connectivity between the ventrolateral prefrontal cortex and two brain regions that help generate the experience of social distress, the amygdala and the dorsal anterior cingulate cortex.

“Our findings suggest that mindful people are not as distressed or pained by social rejection,” the researchers wrote. “The neural results imply that a reason for mindful individuals’ adaptive responses to rejection is that they do not excessively recruit (and therefore tax) ‘top-down’, inhibitory brain regions to inhibit social distress. Instead, mindful individuals may use more ‘bottom-up’ emotion-regulation strategies that prevent rejection from being distressing in the first place. Interventions that seek to help socially-isolated and rejected individuals may benefit from this mechanistic and biologically-informed information.”

Martelli is a researcher in the Social Psychology and Neuroscience Lab at VCU. The lab, led by David Chester, Ph.D., an assistant professor in the Department of Psychology and a co-author on the study, seeks to understand why people try to harm one another after experiences such as rejection. 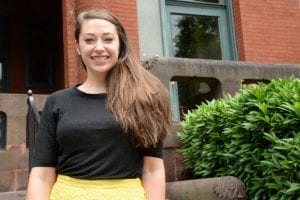 Alexandra Martelli, a doctoral candidate in the Department of Psychology in the College of Humanities and Sciences, is the lead author of the study, “When Less is More: Mindfulness Predicts Adaptive Affective Responding to Rejection via Reduced Prefrontal Recruitment.” (Photo by Brian McNeill, University Relations)

“Mindfulness has beneficial effects for many psychological and behavioral maladies,” Chester said. “Yet in many ways, our understanding of how mindfulness achieves these helpful outcomes is not fully understood. Our findings help shed light on the underlying biological and psychological mechanisms through which mindfulness helps people cope with distressing social experiences, such as rejection and exclusion.”

“This is important because the use of such ‘top-down,’ suppressive emotion regulation has been shown to backfire and is linked with poor emotion-related outcomes such as impulsivity,” he said. “Mindful people are likely using a more ‘bottom-up’ regulatory approach, which makes sense given these individuals’ tendency to focus on the organic origins of their feelings. On a practical level, our findings point to the utility of mindfulness in coping with interpersonal stressors. People dealing with exclusion or rejection may likely benefit from training in mindfulness techniques.”

The study’s findings are relevant to the Social Psychology and Neuroscience Lab’s mission, Martelli said, because they further understanding of the underlying neural mechanisms of aggression and violence within interpersonal relationships.

“An over-reliance on top-down emotion-regulation strategies can result in self-regulatory failure,” Martelli said. “Therefore, more bottom-up strategies, such as mindfulness, may be effective at regulating difficult emotions such as anger or frustration that typically result in violent or aggressive acts.”

This took me back to when I was in training in a charter school in the less affluent areas in Washington DC and I introduced a Mindfulness Program for Children (and Yoga) to them. That was a little seed I hope will flourish on, at least, some of them.