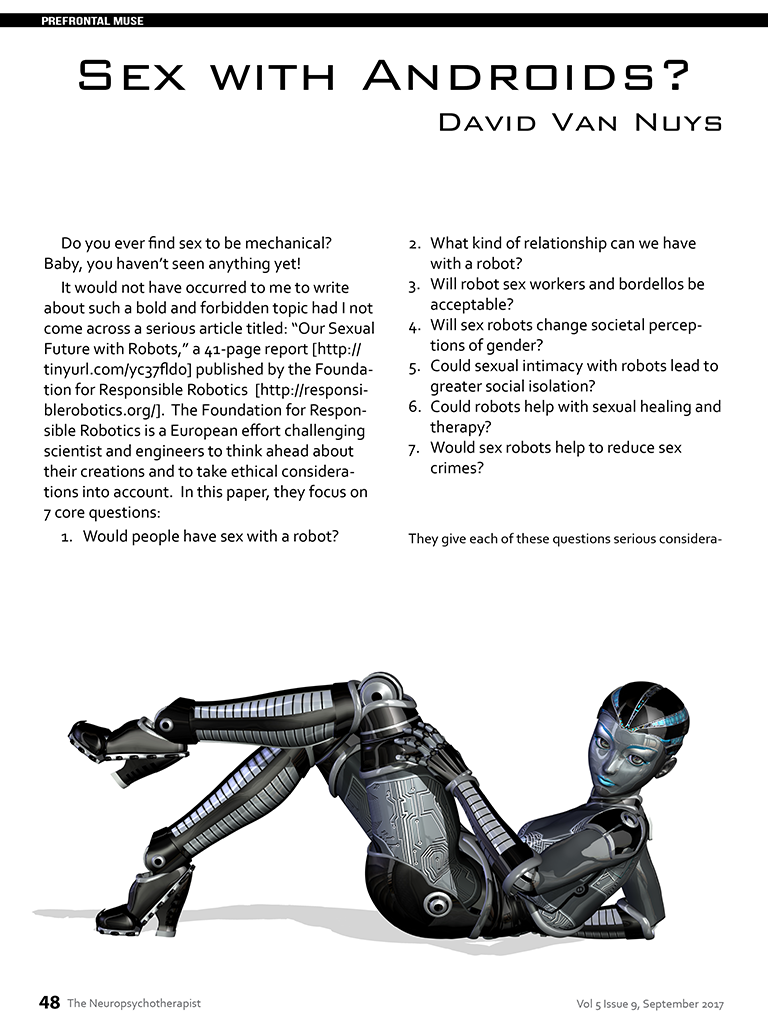 Do you ever find sex to be mechanical? Baby, you haven’t seen anything yet!

It would not have occurred to me to write about such a bold and forbidden topic had I not come across a serious article titled: “Our Sexual Future with Robots,” a 41-page report [http://tinyurl.com/yc37fldo] published by the Foundation for Responsible Robotics [http://responsiblerobotics.org/]. The Foundation for Responsible Robotics is a European effort challenging scientist and engineers to think ahead about their creations and to take ethical considerations into account. In this paper, they focus on 7 core questions:

They give each of these questions serious consideration, citing research where available. Clearly, however, it’s early days and there is much more research that is needed and considerable debate can be expected in the years to come. As the authors observe: “A problem with the public perception of sex robots is that the public is currently not well informed about the actuality of robots in general. Sex robots are new and only a few people have encountered them directly. Information in the public domain mainly comes from science fiction tropes engendered by television and the movies.”

It’s a remarkable document and I recommend it to any readers interested in more detail. That being said, here are a few of the findings (in my own words) that stand out for me:

This is an issue about ethics, responsibility and the emotional, psychological and social impact of sex with robots.

Back about 40 years or so I was finishing up my doctoral degree in clinical psychology at the University of Michigan. As part of that program, I was doing an internship at a Veteran’s Administration hospital outside of Detroit. One day I unexpectedly received a letter at the hospital from a woman I did not know. I don’t know how she got my name or knew to write me at the VA Hospital. Her letter contained a sort of psychic reading on me in which she asserted that back in the age of Atlantis I had been a robot maker. She went on to say that the purpose of this current incarnation is for me to work off that Karma by dealing with people in more humane ways. Well, of course, I pretty much discounted her ideas as nutty. I never wrote back to her or had any contact with her. Nevertheless, I’ve never forgotten this unsolicited wisdom. I have to say it now strikes me that maybe I should have given her more credence. She would have had no way of knowing that I always had strong interest in electronics and, originally, had planned to become an electrical engineer. In fact, I been accepted in to University with a full-scholarship in engineering, only to switch out into creative writing and then again into psychology. So there’s some history there of moving from the mechanical toward understanding and serving people instead of machines. And, now, here I am writing about robots. The return of the repressed, perhaps?

I wrote an article recently about how to design robots that we’d perceive as friendly rather than threatening, and in hind-sight it occurred to me that sexuality would inevitably be part of the formula for some designers. Certainly, friends with benefits has great potential for being seen as amicable.

Not surprisingly, this possibility is one that has been explored in written science fiction and recent sci-fi movies. Blade Runner (1982) is one of my all-time favorites for the futuristic atmosphere it portrays. That film features Pris, the replicant android “basic pleasure model” for sexual gratification of humans until she becomes a cold and brutal killer. For this article, I’ve been re-watching Ex Machina (2015) with the beguiling female android Ava who is fully equipped for giving and receiving sexual pleasure. In the 2015 TV series Humans (2015), Anita is a domestic nanny robot and her married owner yields to the temptation of initiating her sex mode, to the repulsion of his wife and family.

I was surprised to discover the degree to which the sex-with-robots scenario is already upon us. For example:

A variation known as teledildonics allows couples at a distance to sexual stimulate one another. Again, according to the Responsible Robots report, “Companies now offering distance teledildonic devices include Lovense with the male Max and the female Nora, and Kiiroo with the male Pearl and female Onyx. Kiiroo uses capacitive touch technology to allow one user to control the other’s device. This, the company claims, encompasses all senses and allows users to stimulate each other visually, audibly and physically.”

As with so many other examples, the technology is moving faster than the codification of legal, ethical or psychological considerations. So regardless of how you or I might feel about this, the technology is willy-nilly driving us into this brave new world.

In watching the growing isolation and disconnection between humans as all sorts of digital technologies and devices proliferate,I don’t think it’s a far stretch to think sex robots are the next layer in dividing or separating people further, but mainly because replicating something to look and behave in a human way, and to engage in such an intimate human activity, could potentially distort people’s expectations of each other as a human I.e. a robot won’t gain weight, get wrinkles, say no etc. Humans already have enough difficulty learning how to connect with each other as it is; developing and practicing neural pathways further to ‘not’ have to connect or feel empathy is likely to cause issues. Interestingly, if sexual procreation/ urges are regulated by the primitive brain, the discussion in this article about the pornography industry being so prolific and the move towards creating human-like sex robots to continue seeking more ways to sexually gratify that urge, then it speaks volumes about where we may be heading as a species – I’m not too keen to live in a world where our primitive brain runs the show! I’d prefer our neocortex be fully engaged in exploring every angle of invention and creation of technology and try and envision 8 generations ahead of our time, and sense if that creation is going to enhance connection and love between humans, or not.

According to me, sex presented as a commercial-mechanical ’empty my balls’ point of view is not going to help humans to make love with each other, but will encourage more permission to see sexuality as pure mass production devices you order online, like smartphones and Ipads have created the illusion that they are the ultimate game-productivity-communication Graal, which it is certainly not (since you go less outdoor, you are more physically trapped by it, you get less involved in family face-to-face relations, and constantly visually hypnotised by its 4K beautifull big 6” color screen plus social medias instant messaging flow.

A sex-robot and a smartphone are objects that companies can sell and make money with (the main selling point is to give pleasure that requires regular and more intense addiction to keep working), while obviously real-world LOVE and ATTACHMENT cannot generate profits because they can’t be sold online.

Do not expect big companies will ever care about ethic, they never did, as usual only profits will be the core of this new product line.

Sexuality has to be kept human-like, not merchandises with a price tag on it, and lower prices for Christmas sales!