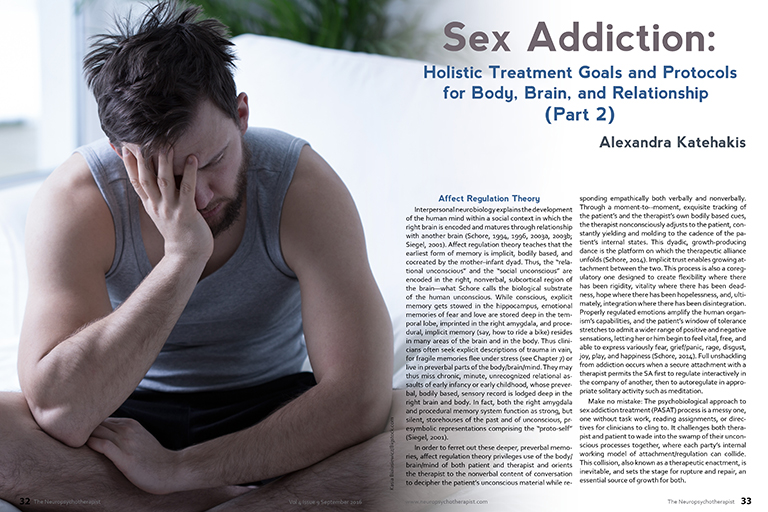 Interpersonal neurobiology explains the development of the human mind within a social context in which the right brain is encoded and matures through relationship with another brain (Schore, 1994, 1996, 2003a, 2003b; Siegel, 2001). Affect regulation theory teaches that the earliest form of memory is implicit, bodily based, and cocreated by the mother–infant dyad. Thus, the “relational unconscious” and the “social unconscious” are encoded in the right, nonverbal, subcortical region of the brain—what Schore calls the biological substrate of the human unconscious. While conscious, explicit memory gets stowed in the hippocampus, emotional memories of fear and love are stored deep in the temporal lobe, imprinted in the right amygdala, and procedural, implicit memory (say, how to ride a bike) resides in many areas of the brain and in the body. Thus clinicians often seek explicit descriptions of trauma in vain, for fragile memories flee under stress (see Chapter 7) or live in preverbal parts of the body/brain/mind. They may thus miss chronic, minute, unrecognized relational assaults of early infancy or early childhood, whose preverbal, bodily based, sensory record is lodged deep in the right brain and body. In fact, both the right amygdala and procedural memory system function as strong, but silent, storehouses of the past and of unconscious, presymbolic representations comprising the “proto-self” (Siegel, 2001).

In order to ferret out these deeper, preverbal memories, affect regulation theory privileges use of the body/brain/mind of both patient and therapist and orients the therapist to the nonverbal content of conversation to decipher the patient’s unconscious material while responding empathically both verbally and nonverbally. Through a moment-to–moment, exquisite tracking of the patient’s and the therapist’s own bodily based cues, the therapist nonconsciously adjusts to the patient, constantly yielding and molding to the cadence of the patient’s internal states. This dyadic, growth-producing dance is the platform on which the therapeutic alliance unfolds (Schore, 2014). Implicit trust enables growing attachment between the two. This process is also a coregulatory one designed to create flexibility where there has been rigidity, vitality where there has been deadness, hope where there has been hopelessness, and, ultimately, integration where there has been disintegration. Properly regulated emotions amplify the human organism’s capabilities, and the patient’s window of tolerance stretches to admit a wider range of positive and negative sensations, letting her or him begin to feel vital, free, and able to express variously fear, grief/panic, rage, disgust, joy, play, and happiness (Schore, 2014). Full unshackling from addiction occurs when a secure attachment with a therapist permits the SA first to regulate interactively in the company of another, then to autoregulate in appropriate solitary activity such as meditation.

Make no mistake: The psychobiological approach to sex addiction treatment (PASAT) process is a messy one, one without task work, reading assignments, or directives for clinicians to cling to. It challenges both therapist and patient to wade into the swamp of their unconscious processes together, where each party’s internal working model of attachment/regulation can collide. This collision, also known as a therapeutic enactment, is inevitable, and sets the stage for rupture and repair, an essential source of growth for both.

Addicts are traumatized individuals whose undernourished prefrontal brain areas support only limited regulatory and executive functions. The more extreme their developmental and early trauma, the more their primitive right amygdala will be hyperactive while their ANS will be chronically hyperactive, hypoactive, or both. Because SA is a problem of affect dysregulation, it is a right-brain, bodily based problem. And a right-brain, bodily based problem cannot be healed with left-brain interventions. In other words, people cannot talk, think, or act themselves out of trauma, whose roots are neither in cognition nor in behavior, but in the affective right brain’s vaster connections down into the body. So accessing affect in the body within a therapeutic context is essential for healing. Neuroaffective science clarifies how, and how much, the mother–infant dyad communicates in rapid concert and below conscious awareness in a “proto-conversation” or “playful duets of agency” (Trevarthan, 2008), and that healing of missing or harmful messages requires just such a relationship and mode of communication. Interpersonal neurobiology also explicates the intersubjective field that emerges as a result of this therapist–patient dyad, and in which interactive regulation can shape the self (Schore, 2014).

The ultimate goal of SA treatment is for patients to resolve their traumas so they no longer have to turn to behaviors outside themselves to relieve their pain. Reconnecting patients to their body/mind by helping them recognize, then tolerate, their bodily sensations—helping them feel what they could not feel long ago—lets them experience coregulation, which alone creates deep and lasting change. Van der Kolk reminds practitioners that “the single most important issue for traumatized people is to find a sense of safety in their own bodies” (Interlandi, 2014, p. 45; van der Kolk, 2014). The therapist, then, must be a “good enough other” who makes a space for the cocreation of an emergent process by bravely letting go of “knowing” or “not knowing” what is going to happen…

This has been an excerpt from Sex Addiction: Holistic Treatment Goals and Protocols for Body, Brain, and Relationship (Part 2). To read the full article, and more excellent material for the psychotherapist, please subscribe to our monthly magazine.

This book will soon be a “Must” read for all professionals dealing with problematic sexual behaviors, and a “Classic” in the Addiction Field. I’m honored to call Alex Katehakis one of my teachers and mentors through The International Institute for Trauma and Addiction Professionals (IITAP.) Her PASAT model for treating problematic sexual behaviors synthesizes the fields of Modern Attachment Theory (Affect Regulation Theory,) Affective Neuroscience, Interpersonal Neurobiology, Polyvagal Theory, Mindfulness, and CBT, DBT, and ACT and it truly cutting edge. Thank you Alex for your contribution to the field.