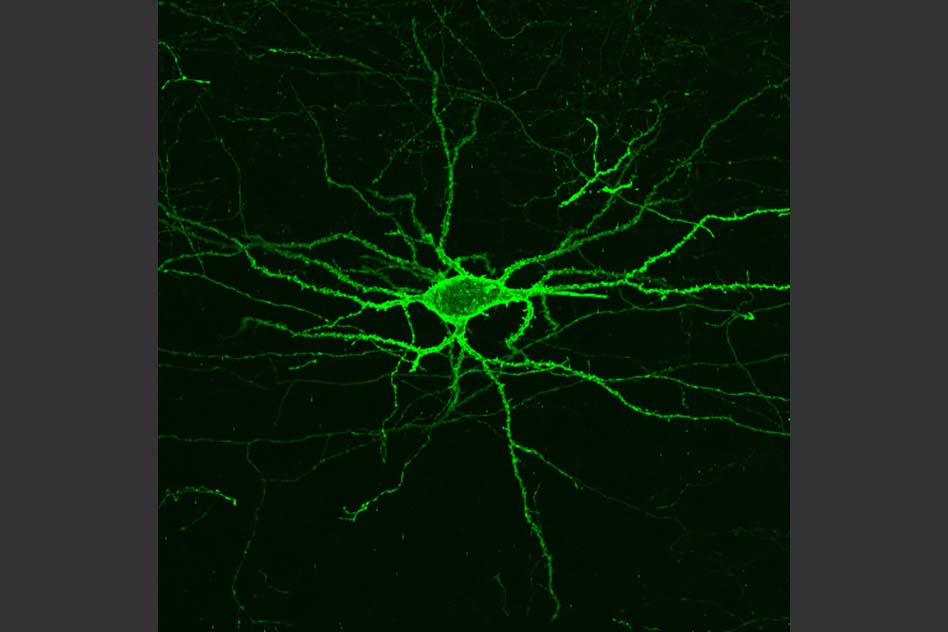 MIT researchers have developed a light-sensitive protein that can be embedded into neuron membranes, where it emits a fluorescent signal that indicates how much voltage a particular cell is experiencing. This could allow scientists to study how neurons behave, millisecond by millisecond, as the brain performs a particular function. Courtesy of the researchers

Neurons in the brain communicate via rapid electrical impulses that allow the brain to coordinate behavior, sensation, thoughts, and emotion. Scientists who want to study this electrical activity usually measure these signals with electrodes inserted into the brain, a task that is notoriously difficult and time-consuming.

MIT researchers have now come up with a completely different approach to measuring electrical activity in the brain, which they believe will prove much easier and more informative. They have developed a light-sensitive protein that can be embedded into neuron membranes, where it emits a fluorescent signal that indicates how much voltage a particular cell is experiencing. This could allow scientists to study how neurons behave, millisecond by millisecond, as the brain performs a particular function.

“If you put an electrode in the brain, it’s like trying to understand a phone conversation by hearing only one person talk,” says Edward Boyden, an associate professor of biological engineering and brain and cognitive sciences at MIT. “Now we can record the neural activity of many cells in a neural circuit and hear them as they talk to each other.”

Boyden, who is also a member of MIT’s Media Lab, McGovern Institute for Brain Research, and Koch Institute for Integrative Cancer Research, and an HHMI-Simons Faculty Scholar, is the senior author of the study, which appears in the Feb. 26 issue of Nature Chemical Biology. The paper’s lead authors are MIT postdocs Kiryl Piatkevich and Erica Jung.

For the past two decades, scientists have sought a way to monitor electrical activity in the brain through imaging instead of recording with electrodes. Finding fluorescent molecules that can be used for this kind of imaging has been difficult; not only do the proteins have to be very sensitive to changes in voltage, they must also respond quickly and be resistant to photobleaching (fading that can be caused by exposure to light).

Boyden and his colleagues came up with a new strategy for finding a molecule that would fulfill everything on this wish list: They built a robot that could screen millions of proteins, generated through a process called directed protein evolution, for the traits they wanted.

“Over the next five years or so we’re going to try to solve some small brain circuits completely. Such results might take a step toward understanding what a thought or a feeling actually is.”

“You take a gene, then you make millions and millions of mutant genes, and finally you pick the ones that work the best,” Boyden says. “That’s the way that evolution works in nature, but now we’re doing it in the lab with robots so we can pick out the genes with the properties we want.”

The researchers made 1.5 million mutated versions of a light-sensitive protein called QuasAr2, which was previously engineered by Adam Cohen’s lab at Harvard University. (That work, in turn, was based on the molecule Arch, which the Boyden lab reported in 2010.) The researchers put each of those genes into mammalian cells (one mutant per cell), then grew the cells in lab dishes and used an automated microscope to take pictures of the cells. The robot was able to identify cells with proteins that met the criteria the researchers were looking for, the most important being the protein’s location within the cell and its brightness.

The research team then selected five of the best candidates and did another round of mutation, generating 8 million new candidates. The robot picked out the seven best of these, which the researchers then narrowed down to one top performer, which they called Archon1.

A key feature of Archon1 is that once the gene is delivered into a cell, the Archon1 protein embeds itself into the cell membrane, which is the best place to obtain an accurate measurement of a cell’s voltage.

Using this protein, the researchers were able to measure electrical activity in mouse brain tissue, as well as in brain cells of zebrafish larvae and the worm Caenorhabditis elegans. The latter two organisms are transparent, so it is easy to expose them to light and image the resulting fluorescence. When the cells are exposed to a certain wavelength of reddish-orange light, the protein sensor emits a longer wavelength of red light, and the brightness of the light corresponds to the voltage of that cell at a given moment in time.

The researchers also showed that Archon1 can be used in conjunction with light-sensitive proteins that are commonly used to silence or stimulate neuron activity — these are known as optogenetic proteins — as long as those proteins respond to colors other than red. In experiments with C. elegans, the researchers demonstrated that they could stimulate one neuron using blue light and then use Archon1 to measure the resulting effect in neurons that receive input from that cell.

Cohen, the Harvard professor who developed the predecessor to Archon1, says the new MIT protein brings scientists closer to the goal of imaging millisecond-timescale electrical activity in live brains.

“Traditionally, it has been excruciatingly labor-intensive to engineer fluorescent voltage indicators, because each mutant had to be cloned individually and then tested through a slow, manual patch-clamp electrophysiology measurement. The Boyden lab developed a very clever high-throughput screening approach to this problem,” says Cohen, who was not involved in this study. “Their new reporter looks really great in fish and worms and in brain slices. I’m eager to try it in my lab.”

The researchers are now working on using this technology to measure brain activity in mice as they perform various tasks, which Boyden believes should allow them to map neural circuits and discover how they produce specific behaviors.

“We will be able to watch a neural computation happen,” he says. “Over the next five years or so we’re going to try to solve some small brain circuits completely. Such results might take a step toward understanding what a thought or a feeling actually is.”