See What You Made Me Do – Power, Control and Domestic Abuse

Investigative journalist Jess Hill puts perpetrators – and the systems that enable them – in the spotlight. Her new book See What You Made Me Do is a deep dive into the abuse so many women and children experience – abuse that is often reinforced by the justice system they trust to protect them. Critically, it shows that we can drastically reduce domestic violence – not in generations to come, but today. Combining forensic research with riveting storytelling, See What You Made Me Do radically rethinks how to confront the national crisis of fear and abuse in our homes.

We talk with Jess and David about this award winning book, the process, the learning, and the very complex problem of domestic violence.

Below is a review by Camilla Nelson, University of Notre Dame Australia

See What You Made Me Do: why it’s time to focus on the perpetrator when tackling domestic violence

You will not sleep if you read Jess Hill’s new book. Nobody should.

Anybody familiar with Hill’s work as an investigative journalist will have seen her Walkley Award-winning reports on family and domestic violence, including blistering interviews with women and child survivors.

Four years of intensive journalistic investigation have produced See What You Made Me Do, a book that vividly conjures the scale of the problem with fresh terror. It brings together stories of domestic violence and survival from all walks of life – from the affluent neighbourhoods of Sydney’s Bible Belt where “the streets are immaculate, and the houses are huge”, to struggling remote and regional communities.

Hill scrutinises the social and psychological causes of domestic abuse, its terrifying consequences, and – most hauntingly – the failure of our legal and social institutions to adequately respond.

At the centre of her book is an idea that shines bright in its clarity. Instead of asking “Why didn’t she leave?” – or embarking on yet another public awareness campaign to change attitudes to gender, which might have an impact in 20 years time – we need to invest more in justice programs that focus squarely on the perpetrators, holding them to account.

Hill argues this requires that we turn our habitual understanding of domestic violence on its head. Instead of allowing a public discourse to flourish that verges on the edge of victim-blaming we need to “think about his actions as much as we think about hers”. If we can do this, she writes, “we can stop perpetrators – not in decades to come, but right now”.

In Australia, Hill reports, a country of almost 25 million, one woman is killed every week by somebody she has been intimate with. She estimates that Australian police are called to a domestic abuse incident every two minutes.

“There are criminal offences committed within domestic abuse, but the worst of it cannot be captured on a charge sheet,” she writes. “A victim’s most frightening experiences may never be recorded by police or understood by a judge.”

It’s not a crime to tell your wife what to wear, writes Hill, or how to clean the house, or what groceries she’s allowed to buy. “It’s not a crime to convince her that’s she’s worthless, or to make her feel that she shouldn’t leave the children alone with you.” It’s not a crime to gaslight or “break her sense of what’s real”.
These are the “red flags” for domestic homicide. But “by the time that crime occurs, it’s too late”.

The effect on children

The stories that Hill tells about children, and her interviews with child survivors, form the most chilling part of this book.

know all the best places to hide, and how to make themselves disappear when the yelling starts. They hold their mother while she cries and they help wash off the blood …

And yet, there is little reliable data on how many children are affected by domestic violence. “It’s simply not officially measured,” writes Hill. An oft-cited Australian Institute of Criminology survey based on a small sample places the figure at 23%. Hill cites other studies that put it potentially higher.

But in media reports of domestic violence, children are barely mentioned. Journalists are not equipped to interview children, rightly fearing they may inflict further trauma. The unintended result is that children often feature as objects, possessions or extensions of their parents. This treatment is repeated in institutions such as the Family Court of Australia where, Hill writes, children’s voices are not heard in any direct way.

In one chapter, Hill returns to interview the child survivors she first spoke to in her landmark 2015 article in The Monthly. She tells the story of “Carly” and her brother “Zac” who were placed in the care of their father and denied contact with their mother “Erin” by court order after “Erin” had fled with the children interstate, fearing violence.

Hill quotes Carly’s 2016 letter to a victim’s rights advocate, Robyn Cotterell-Jones.
“I am extremely unhappy living with my father and I fear for my safety … I’m so frightened that I never fail to lock my door whenever I enter my room …”

Hill argues that the silencing of children like Carly is “patently dangerous”. She writes:

The family law system too often treats kids as little more than parental property, and domestic abuse as an adults-only affair that is resolved once parents separate.“

The adversarial system of the Family Court does not serve domestic violence victims well. Hill writes of those who appear “disorientated and anxious” and “terrified their children will be ordered to see or live with someone they regard as dangerous”. In court, perpetrators more often appear “calm and rational” – thus their version of the story can appear more believable and they are seen as the “better parent”.

Hill’s book draws attention to the suffering of children subject to what she calls the court’s “whims”. She interviews a barrister who stayed in a violent relationship for ten years because she knew “just how unsafe the Family Court could be for victims” and their children.

A recent report of the Australian Law Reform Commission has recommended that the federal system of family courts be abolished and the powers be returned to the states and territories who are better equipped to deal with issues of child protection.

Perpetrators don’t assault women and children because society says it’s okay. Hill argues they more often assault women because they experience a sense of “shame” that conflicts with socially sanctioned models of masculinity that tell them they are entitled to be in control. The media label these attitudes “toxic” – as in the popular phrase “toxic masculinity”, which refers to the dense network of attitudes and beliefs that give rise to gender violence.

But words such as “toxic” carry the unfortunate connotation that such attitudes can be isolated and purged from the system; that another awareness campaign will fix them. Hill argues that while public awareness campaigns play a useful role, continuing to “blame the patriarchy” is an inadequate response.

The problem in public and media discourse is that the perpetrator remains an obscure figure. In media reports the actions of the perpetrator are linguistically and symbolically silenced.

Violence is often claimed to be “bizarre” or “unexplained” or “out of the blue”. Shadowy linguistic forms hide a murderous reality. “Axe slashes a family apart,” reads one headline. Similarly, the myth of the “good bloke” who is “driven” to murder his daughter and grandchildren elicits the headline, “He was in a bad place”.

Sometimes, victims – mostly women – are focused on and their lives and hopes or dreams discussed. Still, the question most articles ask are: “why didn’t she leave”? The behaviour of the perpetrator is rarely questioned.

Hill describes a revealing conversation with a counsellor from the Safe Steps 24-hour family response line.

“You must get so frustrated when you think a woman’s ready to leave and then she decides to go back,” I say.

“No,” replies the counsellor pointedly. “I’m frustrated that even though he promised to stop, he chose to abuse her again.”

Instead of “penning yet another ‘call to action’ – one more on the teetering pile” Hill asks that justice and law enforcement programs place the perpetrator at the centre of their crime fighting efforts.

Hill nominates as an example the interventionist approach of civic authorities in High Point, North Carolina, which successfully halved a domestic homicide rate that had been running at twice the US national average. In Australia, she draws attention to a “justice reinvestment” program in Bourke, NSW, which has seen domestic violence related assaults drop by 39%.

This book traverses terror and ends with a plea. Recording her own struggle as a writer and journalist, Hill describes “grasping for the perfect combination of words that will make you, the reader, feel it so acutely, with such fresh horror, that you will demand – and keep demanding – drastic action.”

Inaction is easy, she writes. All the perpetrator asks is that you say nothing. 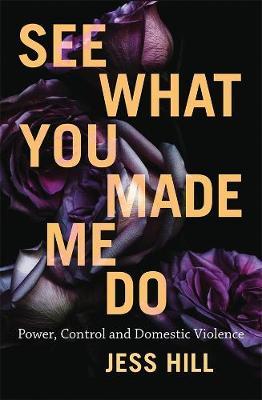 Purchase from the Book Depository

Truly interesting podcast. I ordered the book while I was listening and I cannot wait to read it and learn more. I’ve shared the podcast with friends in the mental health field too. A very important topic that needs exploring.

I’m a therapist in Texas. I really wanted to like this podcast as I deal with a lot of domestic violence cases. Sadly, and predictably the discussion went to Donald Trump. After that you lost all credibility. Your narrative is 180 out of phase. The cities that are burning are Democrat strongholds. It is intellectually lazy to just default blame Trump because you personally dislike him.

This saddens me in that I respect the work y’all do and I use Matt’s book as a daily reference. However I can’t take anyone seriously who uses the abuse of women as a pulpit to bash my president. You should be ashamed.