Scientists square off against gamers in a game of neuron-tracing 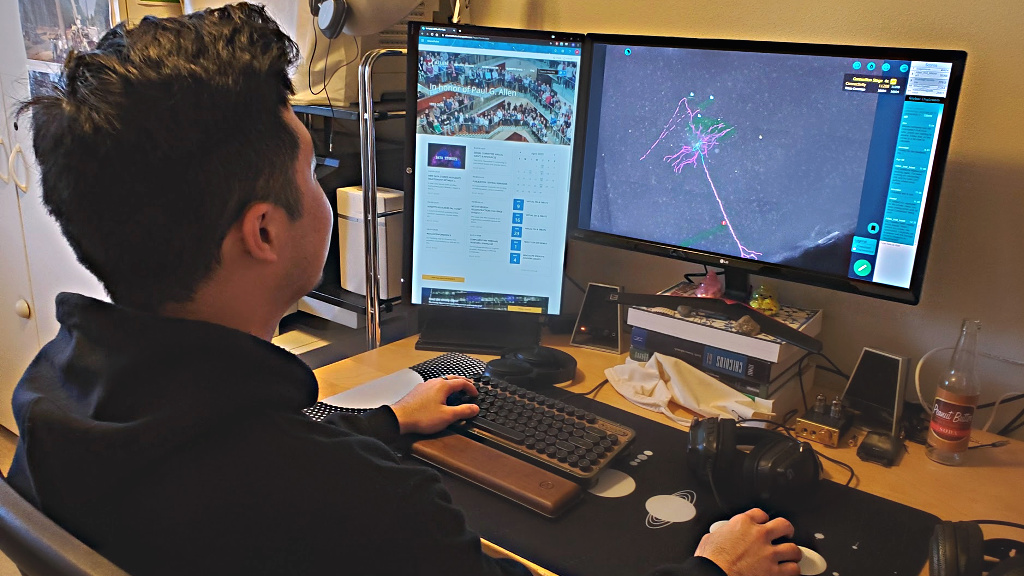 Veteran players of ‘Mozak’ are pitted against Allen Institute researchers — well-versed in neuroscience but new to the online game — in a work-and-game-at-home challenge.

In a time when millions of people are suddenly working from home — as of this writing, 42 states in the U.S. have enacted state-wide stay-at-home policies for the coronavirus pandemic — many of us are now looking for virtual connections in lieu of the real thing.

Herman Tung, a research associate at the Allen Institute, has been spending his workdays making a very specific kind of connection: He’s tracing and connecting the many branching tendrils that make up a single mouse neuron using Mozak, an online neuroscience game developed by the University of Washington’s Center for Game Science and the Allen Institute.

Pre-pandemic, Tung worked mainly at a laboratory bench. But in early March, the Allen Institute building closed to all but a handful of essential employees, to help reduce community spread of COVID-19. Everyone else shifted to working remotely.

“I’m part of the tissue processing team; I provide brain slices to other teams and isolate individual cells. But you can’t really do that at home,” Tung joked. “During this work-from-home period, Mozak was something we could do and still be productive.”

Mozak asks science-minded gamers to capture the 3D shapes of neurons based on sometimes-murky microscopy images of the cells. It’s gaming for a purpose: The data from Mozak, which was debuted in 2017, feeds to the morphology team at the Allen Institute for Brain Science, a division of the Allen Institute. This group is responsible for recreating and understanding neurons’ complex structures, part of a larger effort to understand what differentiates one type of neuron from another.

The team normally spends most of their time doing virtual neuron tracing in the office, using specialized software and computer equipment — which proved too difficult to transport home, and remote connections are too slow for the data-intensive work.

“We started talking about what we were all going to do from home, and one idea we had was to push all our normal work to Mozak,” said Staci Sorensen, Ph.D., an Allen Institute neuroscientist who leads the morphology team. “We realized that there were going to be a lot of lab-based workers who would be working from home, and a lightbulb went off that maybe we can get more of our scientists involved in this effort.”

To make the at-home work a bit more fun, the researchers had the idea to go up against Mozak’s regular cadre of at-home players in a citizens vs. scientists neuron-trace-off. The Mozak developers thought the citizens would be a shoo-in to win, Sorensen said, and suggested that the Allen Institute researchers take a week to warm up first. So the neuroscientists split up into teams based on their usual lab duties and faced each other in the first week-long challenge.

At first, Tung was leading the individual scoreboard for the most neuron-tracing points. He built Mozak into his socially distant work schedule, playing the game at his desk for the first two-to-three hours of the morning.

“It’s a nice way to ease into the day,” Tung said. “I think I was at the top in part because I spent a lot of hours on it. I’ve let up a bit since then.”

When it came time to face off against the game’s regular players, the neuroscientists had already racked up so many points that the shoo-in didn’t look as likely. Instead of banding together as one team of scientists, they decided to stay in their individual lab groups to face each other and the at-home players.

Staci Sorensen’s 8 year old son, Ren, loves playing Mozak and slipped her this note while she was on a conference call.

“We’re so thankful for the ongoing work of the at-home players in helping us reconstruct these cells,” Sorensen said. “But I’m also proud of the Allen Institute teams for really bringing it.”

Taken together, the scientists garnered 10.4 million points in second week-long challenge, and the citizens racked up 4.8 million.

Tom Crites, a retired physicist living in Portland, Oregon, first read about Mozak in a news article about a year ago and has been playing the game almost daily ever since.

“It’s a bit like an Easter egg hunt,” Crites said, describing how players can trace pieces of the neurons and find hidden connections. “You trace and just follow where each piece is going. You can sit there and do it without having to think about anything else. I enjoy it very much.”

The challenges have generated starting-point reconstructions of nearly half a dataset of 100 excitatory mouse neurons, the type of neurons that activate other neurons. The researchers use the virtually traced neurons in computational analyses that bin the brain cells into categories based on their shape. The game’s output in the weeks since the Allen Institute challenges started is five times higher than its usual, the Mozak developers said.

The scientists use data from a few different kinds of experiments to categorize brain cells, but the 3D tracing is by far the most laborious way of understanding the neurons. Mozak was developed in part to crowd-source some of that labor.

“We’re moving through cells faster because we have the players creating that starting point for us,” said Rachel Dalley, a senior research associate at the Allen Institute who oversees much of the Mozak-related data flow. “Instead of starting from scratch, we can now take a cell from the game and it’s 50 or 75% done.”

Next, the Allen Institute teams hope to take on neuroscientists from other research organizations as they push to finish tracing the 100-neuron dataset. But of course, the game is open for anyone to play for free, even once the work-at-home related challenges finish.

“I love that all people need is an internet connection and a computer, and they’re able to help us,” Sorensen said. “And we can still do our science.”