Researchers have identified 35 genes associated with cannabis use. The study reports many of these genes are also associated with personality types, risk taking behavior, alcohol and tobacco use, and some psychiatric conditions.

A large-scale genetic study found that some of the same genes associated with the use of cannabis are also associated with certain personality types and psychiatric conditions. The study, published in Nature Neuroscience, conducted by a team of scientists who are part of the International Cannabis Consortium, is the largest to date genetic study to look at the use of cannabis.

“Our study showed that people with a vulnerability to develop schizophrenia are at increased risk of using cannabis.”

Researchers used data from the UK Biobank, association results from 23andMe customers who consented to participate in research as well as data from individuals in 16 other smaller study cohorts. In all the researchers looked at data from more than 180,000 people for this study. The researchers found that people with schizophrenia are also more likely to use cannabis

The study identified 35 different genes associated with cannabis use with the strongest associations in the gene CADM2. “CADM2 has already been associated with risky behaviour, personality and alcohol use,” said Jacqueline Vink of Radboud University, and the study’s lead author.

For this study, Vink and the researchers were able to look across more than a million genetic variants that together helped to explain approximately 11 percent of the differences in cannabis use between people. The study found a genetic overlap between cannabis use and the use of tobacco and alcohol. 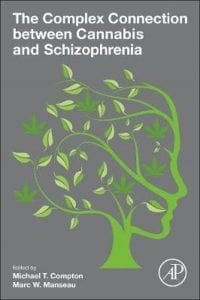 The Complex Connection between Cannabis and Schizophrenia

There was a similar overlap between cannabis use and personality types that were prone to more risky behaviour or were more extraverted. This means that genetic variants impacting cannabis use partially impact other psychological or psychiatric features as well.

The study is carried oud by a team of researchers collaborating in the International Cannabis Consortium, their next project is to explore which genes play a role in the frequency of cannabis use and the amount of cannabis used.