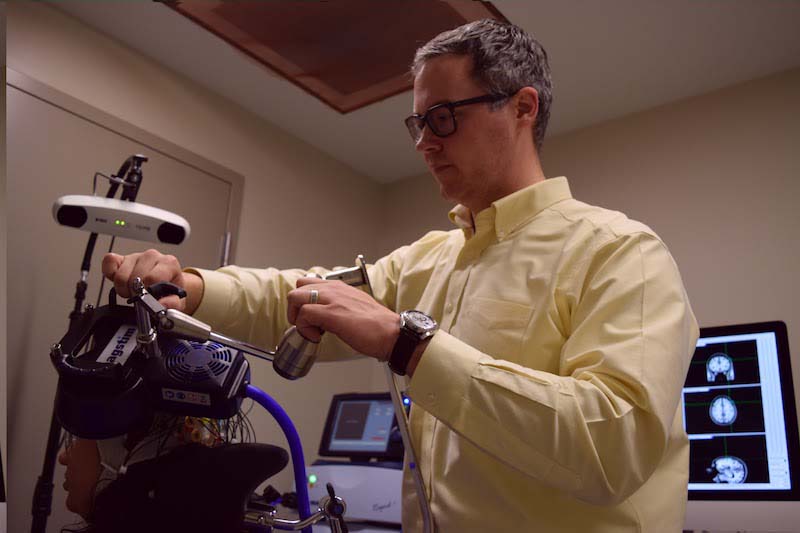 Their results pave the way for the treatment of aphasia and other language disorders.

Effective verbal communication depends on one’s ability to retrieve and select the appropriate words to convey an intended meaning. For many, this process is instinctive, but for someone who has suffered a stroke or another type of brain damage, communicating even the most basic message can be arduous.

Scientists know that a brain region called the left inferior frontal gyrus (LIFG) is critical for language production and word processing. However, it remains unclear how exactly the LIFG interacts with the brain’s complex networks to facilitate controlled language performance — or how these interactions might go awry in a damaged brain.

Using a magnetic brain stimulation technique — the same method sometimes used to treat depressive symptoms — and network control theory, researchers at Drexel University and the University of Pennsylvania have taken a novel approach to understanding how networks in the brain interact to make word-choice decisions. Their results, published this month in the Journal of Neuroscience, pave the way for the treatment of aphasia and other language disorders.

“Our ability to understand neural systems is fundamentally related to our ability to control them,” said John Medaglia, PhD, an assistant professor of psychology at Drexel University and the study’s primary author. “This research provides direct evidence that how we choose the words we want to say in natural language is related to the capability of the brain to integrate and segregate activity across major networks.”

Medaglia, along with his colleague and study co-author Danielle Bassett, PhD, at the University of Pennsylvania, seek to map out the entire landscape of the brain and to uncover how stimulating one network might connect to or affect another depending on experiences — a new, emerging field of research called network neuroscience.

“Network neuroscience provides computational methods to uncover structure in brain imaging data. In turn, knowledge about this structure allows us to better understand how signals travel naturally across the brain’s highways, and also how stimulation can alter that travel in a way that supports better cognitive function,” Bassett said.

To see how the LIFG brain region is involved with different neural networks depending on various language tasks, the research team used a technique called transcranial magnetic stimulation, or TMS, which uses an external magnetic field to induce currents in parts of the brain along with implanted stimulators.

Twenty-eight study subjects were asked to complete two different kinds of language tasks while the research team administered the noninvasive brain stimulation. In the first type of task, study participants completed open-ended sentences such as, “They left the dirty dishes in the…” and were instructed to say a single word that would appropriately complete it. In the second type of task, study participants were asked to name specific images or numerals presented to them.

For each task, the researchers measured the participants’ response times and administered brain stimulation. After collecting the data, the researchers used mathematical formulas to study the controllability of the brain’s network systems. They were focused on how the language tasks affected two distinct network control features: modal controllability, which is the ability of a brain region to drive a network into “difficult to reach” states and boundary controllability, the theoretical ability of a brain region to guide distinct brain networks to communicate with each other.

The researchers found that boundary controllability represented a process important for responding in the open-ended language tasks, when participants needed to retrieve and select a single word in the face of competing, alternative responses. By contrast, modal controllability was closely related to closed-ended language tasks. This suggests that the LIFG’s ability to integrate and segregate communication between brain networks may not play an important role when people are selecting a single, correct word, rather than choosing among several possibilities.

Medaglia says his group was surprised to find this very clear distinction between how the brain responds to two similar language tasks.

“It was also surprising to me that you could find this effect when studying the whole brain, whereas a lot of traditional views on language would have you focus on a much more specific area.”

“I thought our results would be more muddied. There are debates about how unique these processes truly are, and now we have evidence that you can make a clear distinction between them,” Medaglia said. “It was also surprising to me that you could find this effect when studying the whole brain, whereas a lot of traditional views on language would have you focus on a much more specific area.”

Next, the research team is using the same type of techniques in stroke patients to see if stimulating certain areas of the brain can help them to improve their speech.

Study co-author Roy Hamilton, MD, a behavioral neurologist in the Perelman School of Medicine at the University of Pennsylvania, suggests that these findings may someday benefit patients with aphasia (acquired language loss due to stroke). For patients with aphasia, partial language recovery is often associated with the reorganization of the language system in the brain — language functions performed by damaged areas of the brain shift to new areas that had not previously been involved in language processing.

“This study gives us new insight into the underlying properties of areas like the LIFG that enable the brain to process language,” Hamilton said. “But there are still questions we’re looking to answer. For example, what determines which new areas of the brain will be recruited for language processing? What properties make them good candidates? With further research, we can begin to uncover which areas of the brain are likely to be utilized if there’s an injury to the language system. This approach may provide exciting new targets for treatment with focal therapies, including neuromodulation.”