Rules of the Neural Roads: Traffic Control in Your Synapses

OIST scientists set out to investigate the paths of these vesicles, suspecting these cellular vehicles stalling or failing to carry molecular passengers might play potential roles in neuronal diseases. Their research, published in eLife, revealed the mobility and dynamic properties of these vesicles within the pre-synaptic terminal relied strongly on two factors: the type and size of the synapse, and the composition of the vesicle itself.

“How do these vesicles move around and what does vesicle traffic look like within a synapse? And which kind of factors could regulate their motion and explain the wide range of vesicle mobility observed among synapses?” wondered Dr. Laurent Guillaud, OIST researcher and author of the study.

The scientific consensus suggested the motion of synaptic vesicles was predominantly random, based on simple diffusion – a unorganized and passive dispersion all over the synapse. But the new research, led by Dr. Guillaud in the Cellular and Molecular Synaptic Function Unit headed by Prof. Tomoyuki Takahashi, reveals that the phenomenon is much more complex. To accurately observe the traffic within the synaptic terminals, the researchers resorted to unusually large synapses they achieved to grow in lab cultures as they reported last year in the Journal of Neuroscience. 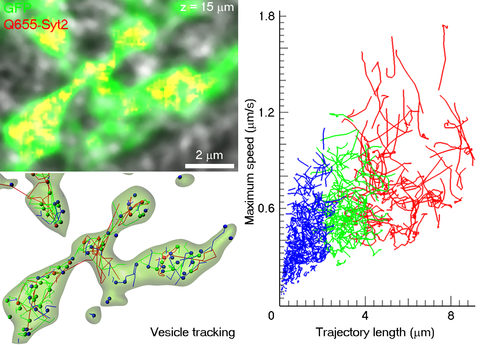 “Conventional synapses are those tiny buttons, down to one or two microns [one millionth of a meter], and it makes it really hard to observe the movement of vesicles in such a small space,” commented Dr. Guillaud. “Instead we used ‘giant synapses’, originally found in the central auditory system, which are 20 times larger and that we successfully grew in Petri dishes for our real-time imaging experiments.”

The vesicles themselves inside the giant synapse are not larger, but it is much easier to follow their individual paths within the huge synapse. The real challenge was to establish a method to efficiently label and track these vesicles. OIST researchers used a specific antibody which would specifically link to a component of the vesicle. This antibody was also linked with fluorescent tags, such as quantum dots – a specific kind of nanoparticles – or pH-sensitive dyes -, which would emit light under specific conditions. When the vesicle fuses with the neuron’s membrane to release neurotransmitters into the synapse, some of these antibodies enter the emptying vesicle and hook themselves in. These fluorescently-tagged antibodies are then carried into the pre-synaptic terminal when the vesicles split away from the membrane. Fluorescence can then be monitored using a confocal microscope, following the path of the vesicles inside the pre-synaptic terminal in real time.

Using algorithms to track a large number of vesicles simultaneously, the researchers discovered that the vesicles’ motion is not entirely random. A wide range of movements takes place inside the synapse, with different speeds, distances and directionalities with a significant proportion of these cellular “public buses” actively carried towards specific destinations.

Once the technique validated in the giant synapses, OIST scientists expanded the study to compare the motion of these vesicles across smaller synapses. They discovered that the size of the synapse also has a direct impact on the direction and speed of the vesicles. Dr. Guillaud added: “Recently, physical factors such as hydrodynamic interactions, crowdedness and collisions have been reported to influence vesicles mobility, but there is very little data on biological factors determining vesicle dynamics. What we showed here is that the type of synapse, its structural organization and its morphology are critical factors influencing the motility of the vesicles.”  Moreover, the unexpected result was that the composition of the vesicle also directly impacted its motion. “Depending on which proteins shape up the vesicle, it would influence its motility,” commented Dr. Guillaud. “From a functional point of view, synaptic activity however does not seem to influence vesicle traffic in these giant synapses.”

A public transportation system loses efficiency if the vehicles stall or are stuck in traffic jams. Similarly, in the pre-synaptic terminal, vesicles unable to carry neurotransmitters might be the cause of neuronal diseases. Therefore, the ability to track these vesicles might reveal important clues. 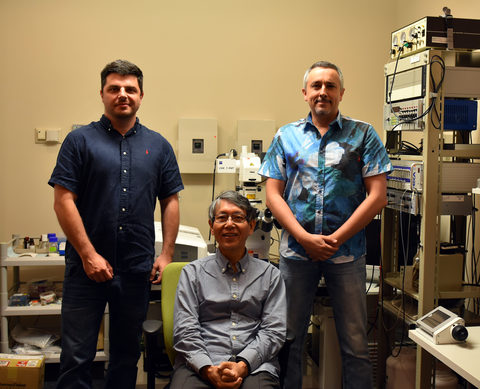 “In neurodegenerative diseases, there are often issues of impaired transmission of information through the synapse. It might be due to problems with releasing neurotransmitters, but it might also be because vesicles movements are somehow impaired inside the pre-synaptic neuron,” concluded Dr. Guillaud. “It would be particularly interesting to check whether vesicles move normally within the synapses in neuro-pathological disorders. And if not, how we can fix the traffic issues! But first, we need to identify and understand the mechanisms that correlate the morphological features of the synapse and the molecular signature of vesicles with their dynamic properties and movements.”