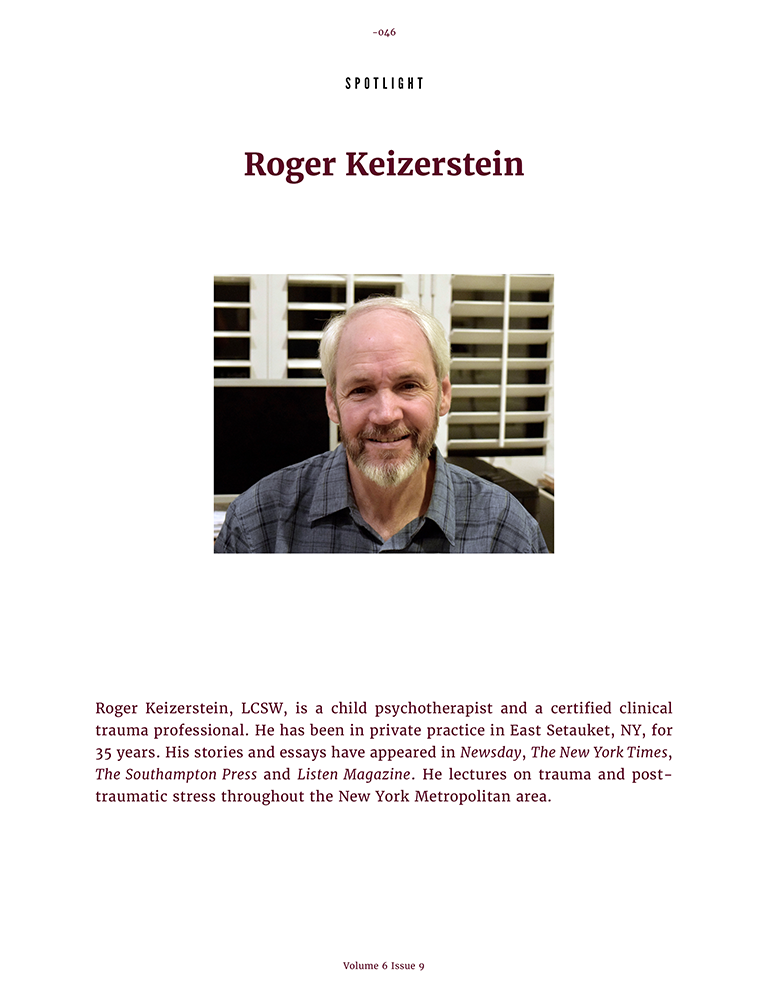 Roger Keizerstein, LCSW, is a child psychotherapist and a certified clinical trauma professional. He has been in private practice in East Setauket, NY, for 35 years. His stories and essays have appeared in Newsday, The New York Times, The Southampton Press and Listen Magazine. He lectures on trauma and post-traumatic stress throughout the New York metropolitan area.

NPT: What drew you into becoming a therapist? What was the pathway you took?

RK: I was drawn into becoming a therapist serendipitously. The summer I turned 14, I began to talk to a few neighborhood girls (who I liked) about their boyfriends, misbehavior, and, mostly, neglect. It gave me the opportunity to look, sympathetically, into the beautiful eyes of the Wertheimer twins (two very special neighborhood girls) and, at the same time, experience the enduring and magical power of reflective listening. They greatly appreciated it. For a while they were so happy to see me—until I probably began to act like a jerk, too.

NPT: How has an understanding of neurobiology helped you in your practice/research?

RK: My understanding of neurobiology has made it possible for me to work with traumatized clients with great confidence. Previously I was reluctant to take them on for fear of further harming them. Now I have an arsenal of evidence-based therapeutic interventions at my disposal to help re-regulate the most deregulated autonomic nervous system. From a practice and research perspective it has been nothing short of miraculous.

RK: My work with children is vastly different than that of adults because I mostly play with children. I’m a play therapist. The trauma work is different, too, because the titration process is usually facilitated through drawing pictures of the traumatic event—the beginning, middle and end. Some older children will create a written narrative in the same sequence. By the way, July this year marked 42 consecutive summers (years) of my working with children.

NPT: What advice do you have for therapists who work with children?

RK: My advice to therapists who work with children is to always do a thorough medical and developmental history before meeting them. Rule out or rule in all the seemingly extraneous factors that impact a child’s life. Be sure to memorize the names of everyone in the family, including grandparents. Learn about what a child plays with, what they watch on television, what they excel at; and last but not least, what the child is proud of. Unless the child is in crisis, keep meeting with the parents until you have a clear understanding of the problem at hand so you can hit the ground running the minute you open the office door to greet the person who will be in your care for at least a while, if not for a long time. Be patient with the play therapy process. Sometimes it seems as if nothing is going on, but there is! A whole lot!

NPT: Can you tell us a little about the theories and philosophies that have most impacted your work?

RK: The theories and practices that have most impacted my work are the principles of play therapy embodied in the works of Virginia Axline. Her book Dibs: In Search of Self (Random House, 1964) had a profound effect on me. She had such respect for the feelings of children of all ages and their ability (with varying degrees of conscious use of self) to change and grow. Regarding my work with adults, Dr. Campanella, a psychiatrist at the VA Hospital in Northport, Long Island, helped clarify my understanding of the psyche. We shared the same visual model, or picture, of the psyche. We both imagined, in our mind’s eye, that the self unwound in a circular motion into rings of character—not unlike the rings of a tree—with characterological energy flowing through, some energy expanding, some contracting, like the universe. Constitutional makeup plus environment equaled character—the protoplasm of which we are. The sole purpose of a psyche was to preserve emotional equilibrium. Energy expansion led to engagement and creativity; energy contraction led to defensiveness and neurotic repetition.

The few Vietnam veteran clients we shared had held it together for years until they had a crisis in their lives, a stressor to the psyche that popped open the maladaptive caulking (we now refer to the caulking as resources) that drained the system and caused levels of post-traumatic stress anxiety that had, for the veteran, the sensation of drowning. I was astounded by Dr. Campanella’s uncanny ability to always find the right medicine to patch the aforementioned holes in the psyche, calming and rebalancing the entire system. I never met Dr. Campanella in person. We collaborated for years over the phone. I am forever indebted to him although he of course would never see it that way, being so humble and kind.

Regarding my trauma work, Dr. Eric Gentry’s theory and practice has influenced me greatly. I use his compassionate approach to treatment in my practice every single day. I had the pleasure of participating in his two-day workshop a few years ago in New York City. He answers any question I have by email in a timely manner.

NPT: Are you working on something special at the moment?

RK: Currently I am working on the subject of inherited trauma. Dr. Rachel Yehuda’s research is very intriguing. She claims that you can inherit, the trauma of a post-traumatic stress injury from parents and even grandparents. This inheritance is, more accurately, of the biological configuration of the DNA and DNA “markers”. She does have her distractors and critics, and she has humbly responded by saying that she might have over-interpreted or given more credence to her data than she should have. Nonetheless, she’s still a believer, albeit a more tempered one.

For the purposes of my current writing project, I am working from the belief that you don’t necessarily inherit the DNA marker of post-traumatic stress injury, but that you do inherit the distorted belief system and worldview created by the traumas suffered in previous generations. This thinking not only determines parenting styles disproportionately but permeates the home environment, even if nobody utters a word of the deeply wounding event the body and mind absorbed years or decades before.

NPT: If there was one thing you would like to impart to a new psychotherapist, and perhaps a new teacher, what would it be?

RK: I would like to tell a new therapist or teacher not to be afraid of brain science. I lot of us, particularly social workers, did not consider going to medical school because we were intimidated by science classes. Please don’t be. The knowledge and therapeutic application are highly specialized but not vast. There are some great teachers out there, and all of them have something valuable to offer. It takes time, but once the neurobiology falls into place, your brain will expand and you’ll not only help your clients heal and grow and develop but yourself as well.

NPT: What’s ahead for you in the next 12 months?

RK: I have formally established a company called In Search of an Art Form Productions. I will attempt to teach brain science—educate and entertain—through onstage performances. I have secured a small, intimate venue in a college town near my office. I will explore the traumas and forms of post-traumatic stress endured by three iconic American authors: J. D. Salinger (The Catcher in the Rye), Truman Capone (In Cold Blood) and Maya Angelou (Why the Caged Bird Sings) and demonstrate how I would have healed them, although Miss Angelou’s trauma was healed by a teacher in Stamps, AR. I hope to begin writing the script soon and bring what will be my first solo performance to the stage sometime in the spring of 2019, which is a time of renewal and for creating paths of resilience.