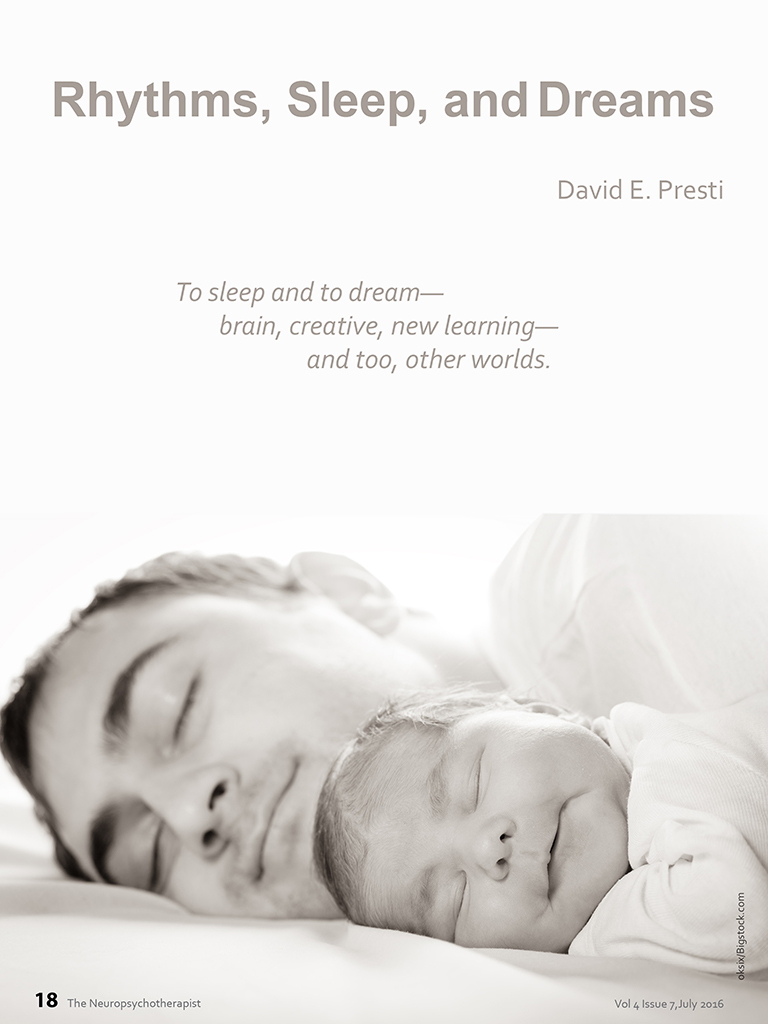 Many (perhaps most) animals have daily periods of inactivity and reduced alertness. For us humans and other vertebrate animals, there are distinctive physiological properties of brain activity that characterize this period of reduced activity. We call this period of time sleep.
The amount of time spent asleep each day varies substantially across different species of animal. Here are a few approximate sleep times for several mammals, in hours per twenty-four-hour day: bat, 19; mouse and rat, 12; rabbit, 9; cow and elephant, 4. Typically, we humans spend eight hours asleep out of each twenty-four-hour day—one-third of our lifetime. If we live to be ninety years of age, that’s a full thirty years spent asleep, amounting to 263,000 hours—a lot of time. (At the very least, this argues for having a comfortable bed.)
If someone is tired and is deprived of sleep, the desire for sleep will become overwhelming, taking precedence over all other desires. That sleep has been preserved throughout hundreds of millions of years of biological evolution suggests that it serves very important functions. And although the scientific study of sleep has blossomed over the last several decades, most of what is going on during sleep remains a mystery.
The regular cycle of sleep and wakefulness in our lives is an example a biological rhythm, one of many periodic behaviors exhibited by humans and other organisms. Sleep and wakefulness follow a circadian pattern (Latin circa = about, dies = day), having a periodicity of approximately twenty-four hours. Other examples of circadian rhythms are body temperature variations and synthesis of cortisol and other glucocorticoids by the adrenal gland. Melatonin is also synthesized in a circadian rhythm. It is made by many organisms, including bacteria, fungi, and plants, as well as animals, and appears to serve protective antioxidant functions. It is synthesized from serotonin in the pineal gland in vertebrate animals and plays an important role in the sleep–wake cycle.
Circadian rhythms are found in many organisms, not just animals. Plants, fungi, and even single-celled creatures exhibit circadian rhythms. Among plants, the opening and closing of flowers and leaves is a circadian rhythm. You might think that this behavior in plants is in direct response to the daily variation in sunlight between day and night. That is, leaves and flowers open during the day when the sun is out and close at night when it is dark. Although sunlight-triggered movement is part of the picture, it is not the most important determinant. This can be demonstrated by growing the plant under conditions of constant light or darkness. Even if a plant grows in a room in which the light is always on or always off, flowers often still undergo a diurnal opening and closing. This is the true test of a circadian rhythm— whether it persists under conditions in which no environmental cues to time of day or night are available.
The same is true for animals like us. The periodic variation in melatonin synthesis by the pineal gland (high at night, low during the day), of core body temperature, and of sleeping and waking all continue in the absence of any information about when it is day and when it is night. This implies that the body contains some sort of internal timer, an endogenous biological clock, able to track the passage of time over a twenty-four-hour period.

In addition to circadian biological rhythms, there are other rhythms of different periodicities. For example, migratory activity in birds and other animals may be regulated by some kind of circannual biological clock. Many birds that live in northern latitudes fly south to warmer climates for the winter and then back north in the spring, where during the summer they breed and raise their young. One might suspect that this migratory behavior is triggered by changes in the temperature or length of the day, things that would clearly mark the changing of the seasons. Again, this is only part of the story. Studies have been done with migratory birds born and raised in the laboratory—birds that have never been outside. They live their entire lives in cages within rooms that have no windows to the outside world. They are also exposed to a constant light–dark cycle: twelve hours of light and twelve hours of darkness, a cycle that never varies. In addition, the temperature of the room is kept constant year-round. These birds get no signals or cues from the environment indicative of the time of the year and the changing of seasons.
Nonetheless, birds in the northern hemisphere, several months after their birth, become restless and begin to hop and attempt to fly in a southerly direction, even though they are inside cages and don’t get very far. Five months later they again exhibit restlessness, hopping and attempting to fly in a northerly direction. Thus, these migratory animals must have an endogenous circannual biological clock—a physiological mechanism that tells them what time of the year it is—as well as an inborn sense of knowing which direction to migrate at which time of the year. In addition, they must have some mechanism of obtaining information as to which direction is which, even inside a closed room. This they accomplish by detecting the geomagnetic field, using it as a source of directional compass information. Researchers have artificially manipulated the magnetic fields in these experimental rooms and have shown that this messes with the birds’ ability to exhibit migratory restlessness in the seasonally appropriate direction...

Key concepts in neuroscience presented for the non-medical reader.

A fresh take on contemporary brain science, this book presents neuroscience—the scientific study of brain, mind, and behavior—in easy-to-understand ways with a focus on concepts of interest to all science readers. Rigorous and detailed enough to use as a textbook in a university or community college class, it is at the same time meant for any and all readers, clinicians and non-clinicians alike, interested in learning about the foundations of contemporary brain science. From molecules and cells to mind and consciousness, the known and the mysterious are presented in the context of the history of modern biology and with an eye toward better appreciating the beauty and growing public presence of brain science.

“[Presti] has achieved success with this book. While it can be read for pleasure, it is also designed to be a textbook for college-level students. So, if you want to be challenged a bit in learning how we function, this could be a good book for you. . . . [A]n interesting and informative book.” — PsychCentral

“This book is a gem. It is a lucid survey of the whole majestic sweep of contemporary neuroscience, written for the non-medical reader. At the same time, it is sprinkled liberally with original insights that will provide much food for thought even for specialists. It will also make an excellent textbook for any introductory course in neuroscience.” — V. S. Ramachandran, author of The Tell-Tale Brain