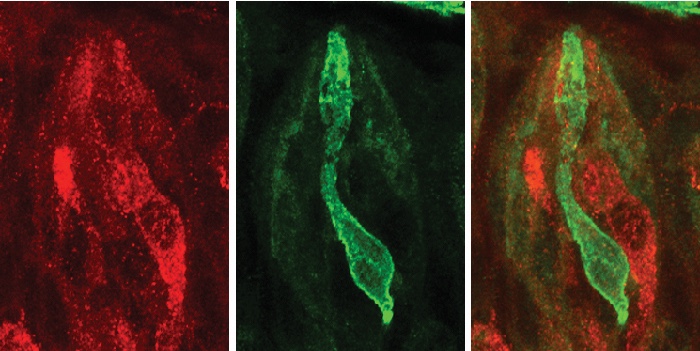 By tangling up bitter- and sweet-sensing cells on the tongues of mice, researchers have teased apart how the taste system wires itself. The results, from Howard Hughes Medical Institute (HHMI) Investigator Charles Zuker at Columbia University and colleagues, reveal how cells constantly reconnect to keep taste abilities running smoothly, allowing flavor information to flow from tongue to brain.

The ability to sense sweet, bitter, salty, sour, and savory (also called umami) is innate, explains Hojoon Lee, a postdoctoral researcher in Zuker’s lab who led the study, published August 9 in the journal Nature. “We are born to be averse to sour or bitter tastes and attracted to sweet things,” he says.

Although it may seem like taste is merely a matter of pleasure (or mild disgust), those responses can be key to survival, especially for other animals. Sweet tastes can signal nutrient-dense fare, whereas bitter tastes can mark a deadly poison.

For doing such an important job, the taste system has unexpectedly high turnover. Like a string of Christmas lights on the fritz, taste receptor cells on the tongue are constantly dying and being replaced. These cells are nestled in the taste buds and live for only about two weeks – which means that stem cells continually need to churn out new ones.

The short life span of taste cells creates a conundrum, Zuker says: Amid such high turnover, how does the taste system do its job reliably? Connections between cells in the taste buds and neurons must be re-wired correctly each time for the taste system to work. “If you don’t connect properly, you’re going to be triggering the wrong behavioral responses,” Zuker says. But just how the taste system pulled off this feat was a mystery.

“Essentially, very little was known about the wiring of the taste system,” Lee says. Each taste receptor cell is tuned to detect one of the five flavors. When the cell recognizes a chemical taste, it jumps into action. This activity is picked up by a bundle of nerves originating in ganglion neurons located just behind the mice’s ears. Most ganglion neurons hook up with receptor cells that all sense the same flavor; e.g., bitter connects to bitter and sweet to sweet. The neurons then send taste messages from the tongue to the brain. 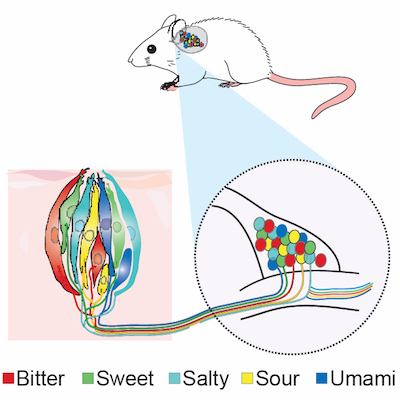 Mouse taste buds (left inset) host a collection of taste receptor cells, each tuned to a particular flavor. Swapping key molecules in these cells scrambles taste sensations as they stimulate neurons (right inset), and travel on to the brain. Credit: Lee et al./Nature 2017

More mix-ups followed. When mice produced Semaphorin 3A in their sweet and umami taste receptor cells (rather than in the expected bitter taste receptor cells), the neurons that normally respond to bitter now responded to sweet tastes, too. The mice’s behavior reflected this confusion. They had trouble distinguishing between plain water and water spiked with the bitter-tasting chemical quinine.

“As new taste cells are born, they provide the right instructions to establish the right connection.”

Similar results came from experiments in which Semaphorin 7A, the sweet signal, was produced in bitter-sensing taste receptor cells. Ganglion cells that usually respond to sweet flavors now began detecting bitter ones, too.

The results show that specific molecular signals in newborn taste receptor cells can pull the right nerve cell connections toward them, creating cellular links that lead to proper taste sensation. “As new taste cells are born, they provide the right instructions to establish the right connection,” Zuker says.

The experiments were done in mice, but because of the strong similarities between human and mouse taste systems, Lee suspects the results may apply to humans, too. And by revealing how the taste system continually remakes itself, the work may lead to a deeper understanding of how the senses are assembled and wired, and how their signals make their way to the brain.