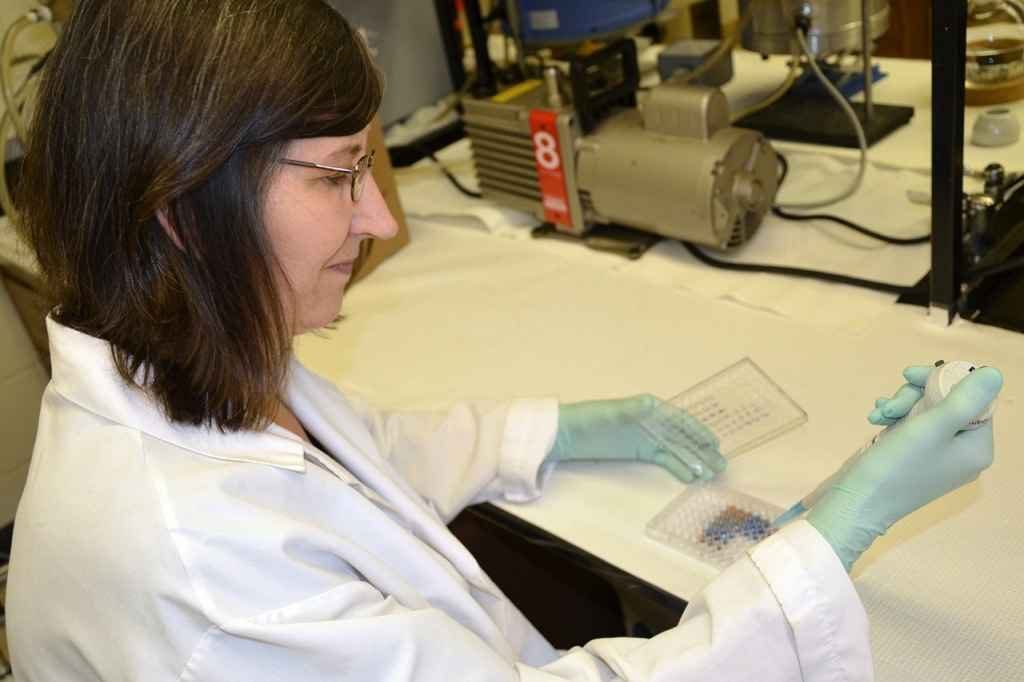 A new study at the Edward Via College of Osteopathic Medicine (VCOM) and the Virginia-Maryland College of Veterinary Medicine at Virginia Tech has found a connection between common household chemicals and birth defects.

Known as quaternary ammonium compounds or “quats,” the chemicals are often used as disinfectants and preservatives in household and personal products, such as cleaners, laundry detergent, fabric softener, shampoo and conditioner, and eye drops. The research demonstrated a link between quats and neural tube birth defects in both mice and rats.

“These chemicals are regularly used in the home, hospital, public spaces, and swimming pools,” said Terry Hrubec, associate professor of anatomy at the VCOM-Virginia campus and research assistant professor in the veterinary college’s Department of Biomedical Sciences and Pathobiology. “Most people are exposed on a regular basis.”

Hrubec investigated the effect of two commonly used quats: alkyl dimethyl benzyl ammonium chloride and didecyl dimethyl ammonium chloride. These are often listed on ingredient lists as ADBAC and DDAC, respectively, and are valued for their antimicrobial and antistatic properties, as well as their ability to lower surface tension. Hrubec found that exposure to these chemicals resulted in neural tube birth defects — the same birth defect as spina bifida and anencephaly in humans.

“Birth defects were seen when both males and females were exposed, as well as when only one parent was exposed,” said Hrubec, who is first author on the study and holds both a doctor of veterinary medicine degree and a Ph.D. from the Virginia-Maryland College of Veterinary Medicine. “The fact that birth defects could be seen when only the father was exposed means that we need to expand our scope of prenatal care to include the father.”

Hrubec found that mice and rats did not even need to be dosed with the chemicals to see the effect. Her research shows that simply using quat-based cleaners in the same room as the mice was enough to cause birth defects.

An earlier study in Hrubec’s laboratory found that these chemicals led to reproductive declines in mice. Follow-up research found that quats were decreasing sperm counts in males and ovulation in females. The research raises the possibility of quats contributing to human infertility, which has been on the rise in recent decades.

“We are asked all of the time, ‘You see your results in mice. How do you know that it’s toxic in humans?’” Hrubec said. “Our research on mice and rats shows that these chemicals affect the embryonic development of these animals. Since rodent research is the gold standard in the biomedical sciences, this raises a big red flag that these chemicals may be toxic to humans as well.”

Quaternary ammonium compounds were introduced in the 1950s and 1960s before the standardization of toxicity studies. Chemical manufacturers conducted some toxicity studies on the compounds during this period, but they were never published. Today, the chemicals are regulated by the U.S. Environmental Protection Agency.

Hrubec noted that an epidemiological study could determine whether people who have a high rate of exposure, such as health care workers or restaurant servers, have a more difficult time becoming pregnant or a greater likelihood of having children with neural tube birth defects, but no such study has been conducted to date.

In addition to VCOM and the veterinary college, the study received funding from the Passport Foundation, a San Francisco-based nonprofit that sponsors research on product safety.