Psychosocial Genomic Perspectives for the Neuropsychotherapist

Psychosocial Genomic Perspectives for the Neuropsychotherapist: 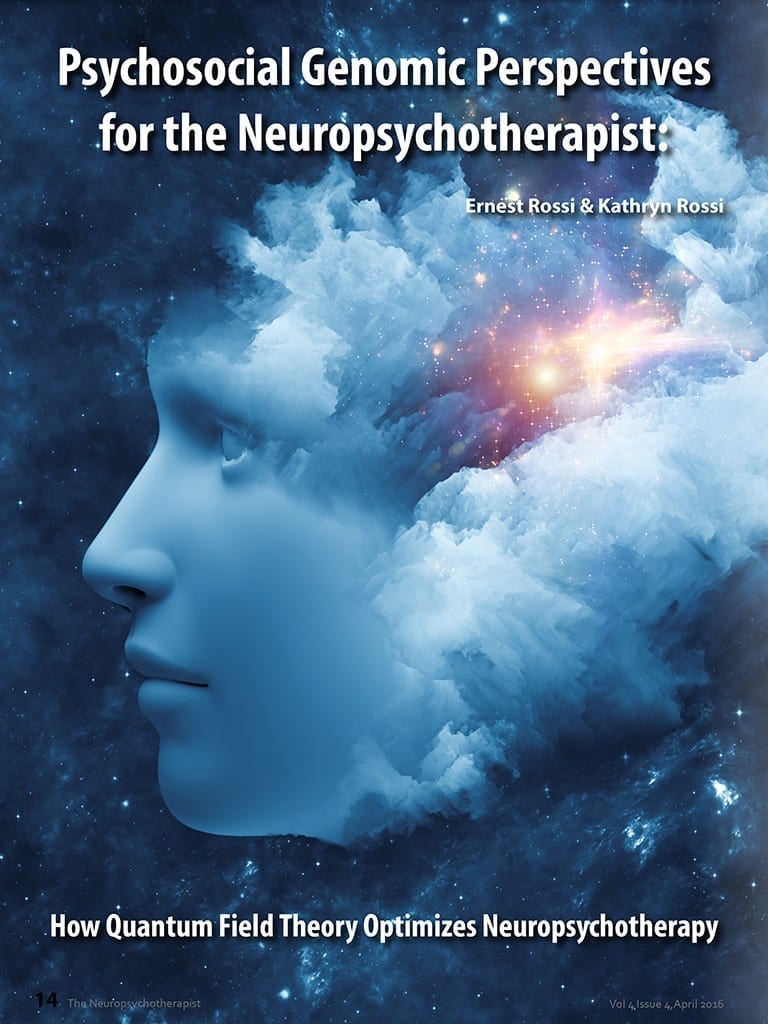 This four-part review provides an introduction to the physical, biological, and quantum foundations of psychotherapy. Part 1 introduces Google psycholinguistic n-grams to trace the 200-year history of the role of consciousness in the healing arts, which documents how there has been an exponential growth of interest in cognition and genomics since the 1950s. Part 2 introduces the fundamental research literature of psychosocial and cultural genomics: how mind and body interact in health and illness. Part 3 introduces the quantum field theory (QFT) of neuropsychotherapy that illustrates the mathematical underpinning of consciousness, cognition, and mind–body healing with the Schrödinger equation. Part 4 documents the quantum wave nature of consciousness, cognition, sleep, dreams, and the role of the observer/operator in neuropsychotherapy. A STEM (science, technology, engineering, math) education is recommended for optimizing progress in the theory, research, and practice of neuropsychotherapy.

1. Introduction:  Who Are We? A 200-Year History of the Healing Arts
Why have many cultures developed practices of rest, relaxation, and the inner focusing of consciousness typical of most mind–body therapies such as meditation, therapeutic hypnosis, and yoga to facilitate health and well-being? Recent research on sleep has uncovered a surprising yet sensible answer to this question. Sleep clears the mind by permitting 60% more cerebral spinal fluid to wash through the brain to remove the toxic byproducts of normal molecular metabolism (Xie et al., 2013). This unexpected finding integrates what we now know about psychosocial genomics and quantum reality to formulate a comprehensive theory capable of guiding the research and practice of psychotherapy in general and neuropsychotherapy in particular. How does this new research fit with the traditional picture of mind–body healing and psychotherapy throughout the ages?
Well, if a picture is worth a thousand words, perhaps two pictures could be even more eloquent. At the 2013 Evolution of Psychotherapy Congress, the authors introduced more than 6,000 professionals in mental health to two graphs illustrating the transformations of consciousness in the healing arts over the past 200 years. Taken together, these two graphs of the psycholinguistic transformations of consciousness tell a fascinating story that presents a new perspective on who we are through the healing arts. The two pictures illustrate the new scientific discipline of the digital humanities—the use of computer algorithms to search for meaning in large databases of text and media. We used this new digital discipline to explore 200 years of the history of transformations of consciousness in over five million digitized books from more than 40 university libraries around the world.
In Figure 1 we graphically compared how the frequencies of English words like religion, spirit, faith, and hope have been gradually losing their popularity over the past 200 years while science, teaching, sex, brain, and consciousness have been gaining. What can this contrast between a “faith-based” versus a “science-based” ethos of consciousness mean for psychotherapy today? Our first impression is that current consciousness (represented on the lower right-hand side of Figure 1) is a mixture of traditional spiritual values and modern education and science. The search for meaning and understanding of the human condition represented in recent manifestations of consciousness might be characterized as a free-for-all quest! 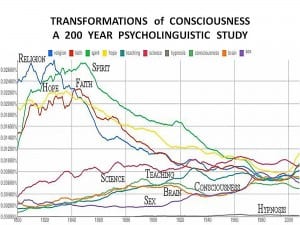 A more contemporary view of our efforts to facilitate the healing transformations of consciousness over the more recent 100 years is illustrated in Figure 2. While medicine continues its leisurely ascent over the past two centuries, DNA and cognitive make dramatic breakthroughs above traditional medicine, psychotherapy, placebo, and hypnosis beginning around 1950. DNA and the cognitive clearly represent the most powerfully accelerating exponential growth curves leading the healing arts today. This implies that a STEM education (science, technology, engineering, math) would be an appropriate foundation for further development of the theory, research, and practice of the healing arts (medicine, meditation, psychotherapy, placebo, therapeutic hypnosis, etc.) at this time. 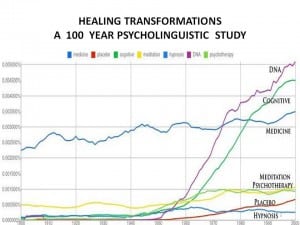 Taken together, Figures 1 and 2 illustrate the psycholinguistic transformations of consciousness and the healing arts over the past 200 and past 100 years that have motivated us to explore the possibility of optimizing health and wellness through a positive new synthesis and integration of DNA and the cognitive, articulated in The International Journal of Psychosocial and Cultural Genomics, Consciousness & Health Research (Rossi & Rossi, 2015, 2016), to which we will now turn our attention...